Developer interest heating up for land between Koontz Elementary, I-85 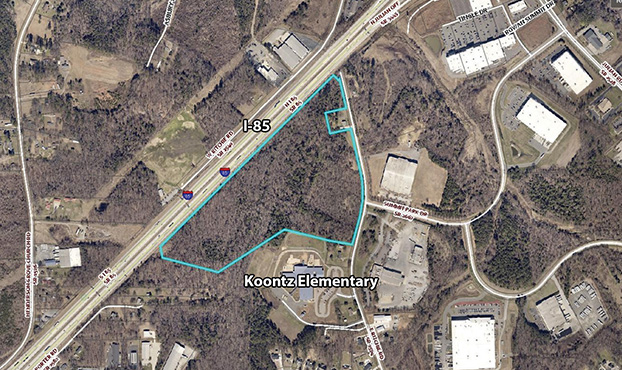 Rowan County's 40-acre property near Koontz Elementary and I-85 is being targeted by multiple development companies.

SALISBURY — Rowan County is fielding multiple offers for what has become a coveted 40-acre piece of land between Koontz Elementary and I-85 — at the end of East Ritchie Road.

The county received a $1.95 million offer on Feb. 7 from Johnson Development Associates for the property. The company’s offer equaled the exact market value of the property as appraised by Lancaster Company in Concord.

Johnson Development Associates, a national real estate developer, intended to construct a new class A industrial building, which are typically new, state-of-the-art facilities. The speculative building would be marketed to potential clients. Sometimes, an industrial building is leased before construction is even finished. Other times, the building is completed before a tenant is secured.

Commissioners on Monday night were poised to set a public hearing to consider the offer. The idea was to bypass the upset bid process by using North Carolina General Statute 158-7.1(d), which allows for private negotiation in the interest of overall economic development. The first step in the process is to host a public hearing, which would give community members a chance to weigh in on the sale.

With multiple offers on the table, the board did not schedule a public hearing and is now working through options on how to best handle the land sale. The board could accept the highest offer and trigger the upset bid process or host an auction of the land where it is sold to the highest bidder. County Manager Aaron Church said those options will likely be discussed by commissioners at an upcoming meeting.

“We are going to sell that property. We are just not exactly sure how we’ll go about that,” said Vice Chair Jim Greene.

The property is zoned commercial, business and industrial, which allows for a wide range of uses. The land is also across from Rowan Corporate Center.But its close proximity to I-85 is one of its most significant assets. Companies have been securing large tracts of land near the interstate at a rapid pace as Charlotte’s outward growth continues.

NorthPoint Development, the company that constructed the building now occupied by Chewy, is working through the process of building an industrial facility on Webb Road.

The Silverman Group, a New Jersey-based developer, is currently clearing land near exit 68 to build what is being called the 85 North Logistics Center, which is planned to have both a 1.4 million-square-foot facility and a smaller 414,000-square-foot facility. Silverman’s site is currently being targeted by at least two companies that are considering a move into Rowan County.

“The pace of business keeps accelerating so it is essential to have available products because companies want to make their decisions and make a move quicker than in the past,” Shelton said.