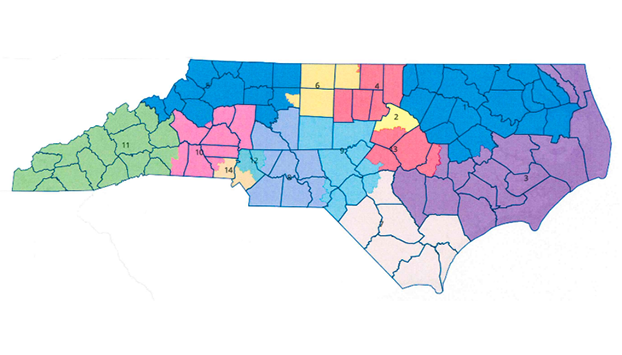 The three trial judges accepted the recommendations of special masters they appointed to assist them with scrutinizing legislative and congressional boundaries that were approved last week by the Republican-controlled legislature.

Superior Court Judges Graham Shirley, Nathaniel Poovey and Dawn Layton did uphold the new General Assembly districts, confirming their experts’ recommendation that statistics associated with the lines show them to “meet the test of presumptive constitutionality.”

But on the U.S. House map, the judges wrote, “the court concludes that the remedial congressional plan does not satisfy the Supreme Court’s standards.” The judges unveiled a new congressional map they adopted.

Lawyers for Republican legislative leaders and for the voters and advocacy groups whose lawsuits in the fall led to court intervention filed a flurry of appeals late Wednesday at the state Supreme Court, seeking that the panel’s rulings be delayed while the justices review them.

Unless the Supreme Court orders otherwise, candidate filing resumes at 8 a.m. Thursday under the new boundaries for the May 17 primary. Candidate filing was suspended in December and the primary delayed from March so lawsuits challenging maps could be tried.

Republicans currently hold eight of the state’s 13 U.S. House seats, with North Carolina to gain a 14th seat this decade due to population growth.
The new court-drawn congressional plan, which state law indicates could be used for the 2022 elections only, makes changes that likely would help Democrats in winning a sixth seat, according to Asher Hildebrand, a Duke University politics professor and former congressional aide.

Republicans would be in good shape to win seven seats. And an open seat stretching from parts of Raleigh south into three fast-growing suburban counties likely would be very competitive, Hildebrand wrote in a social media message. These changes would put obstacles in front of national Republicans seeking to win the seat totals needed to win a majority in the chamber next fall.

The congressional map the judges set aside Wednesday appeared to strongly favor a Republican candidate in six districts, while four strongly favored a Democrat. The other four were considered highly competitive.

In a report attached to the ruling, special masters Bob Orr, Bob Edmunds and Tom Ross wrote the interim plan “achieves the partisan fairness and ‘substantially equal voting power’ required by the Supreme Court” — while meeting other principles, including protecting the rights of Black voters. Orr and Edmunds are former state Supreme Court justices, while Ross is an ex-trial judge and former University of North Carolina system president.

A 4-3 Supreme Court majority this month overturned maps the Republican-controlled legislature enacted in November, writing that the lines prevented a large bloc of voters that supported Democrats from having a fair opportunity to increase their political influence. The justices said they were partisan gerrymanders that violated the state constitution’s free election, freedom of speech and equal protection clauses.

The justices accepted evidence from those who sued over the maps that lines were manipulated to make it almost impossible for Democrats, no matter the favorable environment, to earn majorities. In contrast, statewide elections in North Carolina are usually very close.

Lawmakers were given two weeks to draw replacement maps, and GOP leaders said the remedial boundaries increased partisan fairness and met statistical thresholds the Supreme Court suggested could be used to ensure they were constitutionally compliant.

In their motion to delay enforcement of the panel’s congressional map ruling, Republican legislators contend the judges failed to give proper deference to the legislature.

“North Carolina has not passed legislation or amended its constitution to allow for a commission of three retired judges, aided by out-of-state mathematicians, to create district plans for our … 7.2 million plus voters,” GOP attorney Phil Strach wrote, referencing the special masters.

For the approved state House and state Senate maps, Republicans have a slight electoral seat advantage, according to analyses when the lines are overlapped with the results of 12 statewide elections from 2016 and 2020. But Democrats have a path to win majorities in a favorable political year.

The lawsuit plaintiffs — the North Carolina League of Conservation Voters among them — had offered alternate maps for the judges to consider. They told the judges the replacement maps passed last week did not go far enough in eliminating partisan bias. Their court filings late Wednesday focused on changing the state Senate map, which they argue still contains pro-Republican gerrymandering.