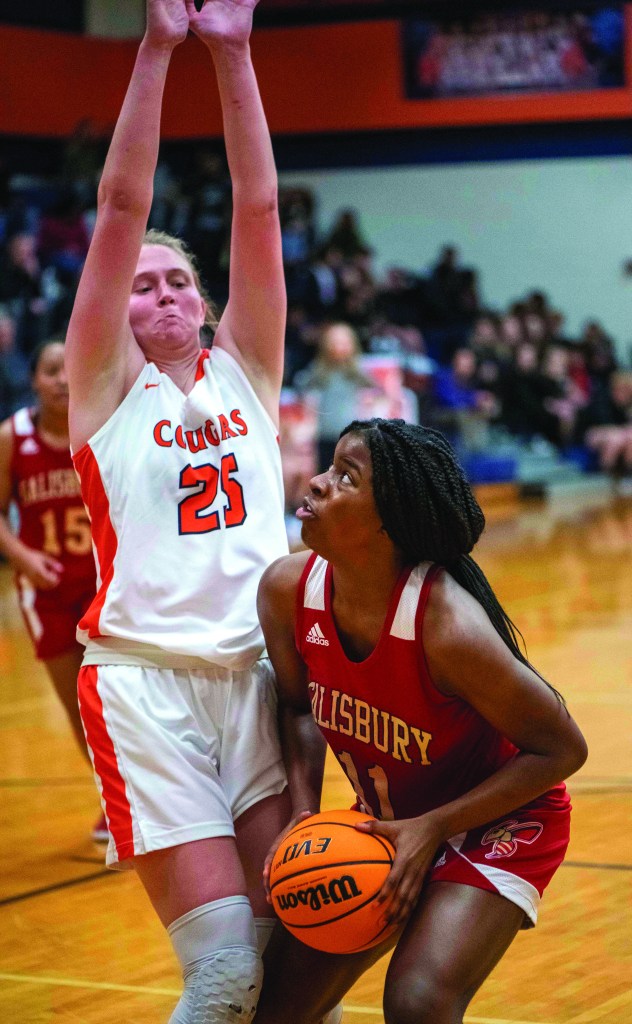 SALISBURY —  Icesis Nwafor made the sudden steal, Kiki Walker made the sweet pass, and MaKayla Noble converted the nice layup in Salisbury’s 59-18 romp against Surry Central on Tuesday.

What those three girls have in common is that none of them start for the Hornets, but they might be the stars for some of the teams the Hornets have been crushing.

“Depth is our biggest strength, no doubt about that,” Salisbury coach Lakai Brice said. “We can sub a lot of girls without falling off much. We get taller when we go to our bench. We can get faster. We can get more athletic.”

Finding playing time for everyone on a 10-person squad (when everyone is healthy) is one heck of a nice problem to have, especially when game clocks are usually running non-stop before the fourth quarter.

Salisbury has a starting combination of steady, defensive-minded veterans — two seniors and three juniors — but sometimes things get even more entertaining when the bench crew, which also includes shot-blocker Haley Dalton and young guard Shamaya Arnold, tug the warmups off. There are some girls on that bench that you don’t know what they might do next. Walker might try to triple-jump her way to the hoop from the foul line.

Surry Central (8-15) came in with a shaky record for a playoff team, but with the experience  that comes from playing in a sturdy league. Surry Central had close losses against highly regarded conference opponents Forbush and North Surry.

But Surry Central’s Golden Eagles, seeded 31st in the 2A West bracket, couldn’t hang with Salisbury for more than a few minutes. Junior guard Kyla Bryant saw to that, scoring quickly off an offensive rebound and a rainbow 3-pointer for 5-0.

After a flurry of steals and layups, most of them featuring the second-seeded Hornets’ other 1,000-point scorer, Rachel McCullough, it was 11-0, and then it was 13-0.

Mary Morgan, Jaleiah Gibson and Jamecia Huntley did what they do. That’s defend, rebound and defend, and look for the guards in transition.

‘We came out very  hyped to play defense,” Bryant said. “We knew who their players were and we were ready for them. I know people say we’ve been beating people by so many points only because our conference is weak. So there was something to prove here tonight.”

“A fast start in a playoff game is really important,” Brice said. “You might be better than the other team, but they don’t have to beat you four out of seven, they’ve only got to beat you once, and there are a lot of teams can beat you on a given night. They can get hot, you can have an off night, a lot can happen. So we wanted to take control early, to let them know this was not going to be that night. We went out there and we defended and we made most of our layups. Kyla has been getting us off to some fast starts offensively. She did it again.”

The Surry Central player Salisbury specifically game-planned for was Mia McMillen, a 5-foot-10 All-State volleyball player who was averaging 21.5 points and more than nine rebounds and five steals per game. She’s not a great long-range shooter, but she’s tough to handle around the hoop. She’s quick and smooth and it was easy to see how she scored 36 against Forbush, 33 against North Wilkes and 31 against Starmount.

Salisbury put Jamecia Huntley on her and took McMillen out of the game while it still mattered. Huntley could match her height, quickness and spring and stayed in front of her.

“Everything they do was going to run through 22 (McMillen),” Bryant added. “Great job by Jamecia.”

McMillen would score 12 of her team’s 18 before it was over, but it was 25-0 — a done deal — before Surry Central ever got on the scoreboard.

Noble is a skilled sophomore and had an active night offensively. She scored a career-high 14, including an eye-popping three-point play in the second quarter.

Bryant drained a shot after a timeout for a 39-18 halftime lead.

The Hornets arrived at their favorite destination — Running Clock City (that’s a 42-point lead) — in the fourth quarter.

McCullough demonstrated a crossover move no one had seen before and drilled a jumper. Even some intense coaches cracked a smile at that one.

Arnold got the last SHS hoop of the night, as the crowd roared.

The only concern for the Hornets was getting people banged around. Gibson was down quite a while after hurting her shoulder.

It’s a talented group, but it’s also a group that puts in plenty of intense practice work and film study.

On any given night, someone might beat them, but they have a chance to be there at the end.

Salisbury will host Community School of Davidson (16-7) on Thursday at 6 p.m.