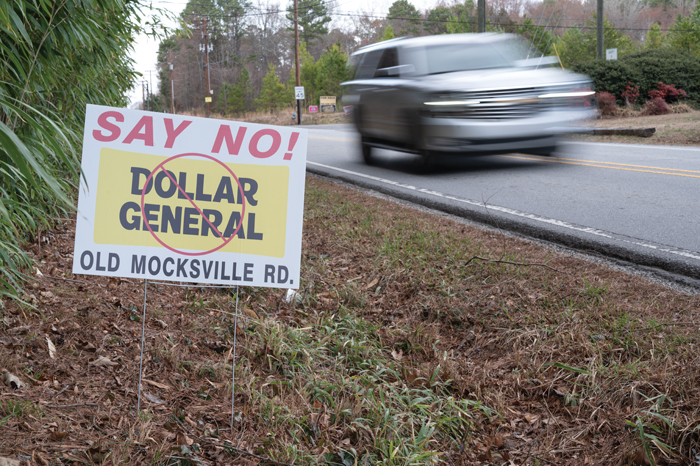 Josh Bergeron / Salisbury Post - Signs opposing a Dollar General store on Old Mocksville Road have proliferated across the Salisbury area and are most prevalent close to the site, which is at the road’s intersection with Seventh Street Extension. Here, a car drives past a sign across from Ivan’s Restaurant.

SALISBURY — The Salisbury Planning Board on Tuesday unanimously voted against a proposal to rezone a piece of property to accommodate a new Dollar General after holding a second meeting on the issue.

The board heard the issue a second time on Tuesday because a faulty link to the Zoom call may have prevented some people from participating. Some residents opposed to the development also said they were not notified of the original hearing on Feb. 8. The Salisbury City Council will have the final say on the rezoning request.

At the original hearing, the board approved the rezoning 4-3. But after more comments and questions Tuesday the board unanimously opposed the rezoning and an overlay request that would make the location, as envisioned by the company, possible on the corner of Old Mocksville Road and Seventh Street Extension.

The project would require a conditional district overlay regardless, but the developer wants to rezone the parcel so it could accommodate a slightly larger concept store that would also sell fresh produce.

The rationale given for the denial was inconsistencies with the city’s Vision 2020 plan and safety concerns. Public comments addressed those issues specifically.

“There have been several issues during my time on the Planning Board, and I tend to go with the neighbors,” board member Jon Post said, noting there were no neighbors in favor of the development who came forward and there is a 500-signature petition opposing the project as well.

Ben Fisher and Eva Nelson, both of whom spoke at the original hearing, again were critical of the project. Fisher called the project inefficient, sprawling growth. Nelson pointed to the Vision 2020 plan, specifically to policies encouraging small-scale businesses to be accessible to pedestrians, away from neighborhoods, near transit stops and have residential signage and lighting.

Susan Cloninger said damage to her property on Seventh Street from vehicles is a recurring issue and she is concerned the project could increase financial burdens she faces.

Trainor said his children weren’t allowed to drive on Old Mocksville Road when she began driving, and his daughter still avoids it.

“That’s a scary road,” Post said, noting he drives it most days of the week.

Post said just because buses and trucks use the road doesn’t mean the city should introduce more traffic to it.

Robert Timberlake questioned the need for the store, pointing out the number of Dollar General locations in the county as well as hardware, drug and grocery stores nearby.

He said driving on the road is not for the faint of heart and questioned the logic of adding more traffic to it.

Diane Fisher criticized rezoning a small spot to the benefit of the property owner and wished the town would rezone it to match residential zoning rather than for a commercial use.

A crime consultant told the board that Dollar General stores in Rowan County do not disproportionately contribute to local crime.

Board chair John Schaffer brought up other issues, including creating a small zoning island in the middle of another such area and granting other exceptions that would leave the property with an amalgam of rules from two zoning classifications.

“To me, that’s a zoning headache,” Schaffer said, adding the current zoning is suitable for a number of uses that could benefit the neighborhood.

City Zoning Administrator Teresa Barringer said the developer could try to come back through the process with a proposal more consistent to existing zoning if the council denies the request.