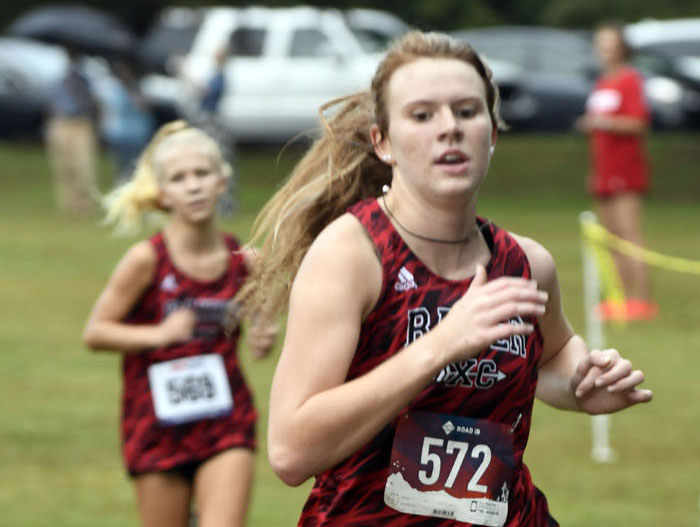 LANDIS — On her recruiting trip to Columbia International University, everyone gathered for a word of prayer for guidance and safe travels.

That’s when South Rowan senior Bethany Rymer knew where she wanted to college.

“I just wanted to find a college with really good people,” Rymer said. “When they prayed with us, I knew that was the place where I wanted to be for the next four years.”

Rymer’s older sister, who also starred in athletics at South Rowan, is already a student at Columbia International.

That would be volleyball All-American Kira Rymer.

“My sister being there wasn’t what made my mind up for me,” Bethany said. “But it’s definitely a plus.”

Her main thing is running. She signed recently with Columbia International for cross country and track and field.

She has won major cross country championships — taking the Rowan County title as a freshman back in the fall of 2018 and winning the Central Carolina Conference meet as a junior in the cold COVID winter of 2020.

But the 5-foot-9 athlete may still may be better known for basketball. A lefty, she can really shoot. She is Rowan County’s leading scorer entering the state playoffs, scoring 19.9 points per game for coach Alex Allen’s Raiders.

She was proficient in hoops as a freshman (when South still had record-setting Janiya Downs). Rymer was South’s leading scorer as a sophomore, but she didn’t play basketball as a junior, electing to focus on the cross country trails.

Her comeback on the hardwood as a senior has helped South win 10 games, pull off a few upsets, and make the 3A state playoffs. Besides a boatload of points, she’s provided ball-handling, steals, rebounds and leadership. She averages 6.3 rebounds, 3.7 steals and 2.8 assists.

“She’s been an amazing asset to this team, a huge piece as far as helping this program grow,” Allen said. “She’s a tremendous athlete and a tremendous person. She’s going to be successful in college. Her dedication, her hard work and her competitiveness will take her far in sports and in life.”

Rymer has scored 29 points twice and had a career-high 32 in an overtime win against Central Cabarrus. That victory was huge as far as South making the playoffs.

South’s only senior, Rymer scored her 1,000th point on Senior Night. South lost to an East Rowan team that was led by Rymer’s first cousin, Hannah Waddell, but talking about getting to that milestone puts a smile on Rymer’s face.

“Coming into this season, after a year away from basketball, I had no idea I had any chance to score 1,000, didn’t realize it was possible,” Rymer said. “I think I’ve had such a good year as a senior because there’s been no pressure on me at all. When I was younger, I did feel a lot of pressure to do well in basketball, to try to get recruited, but once I decided to commit to running in college, there wasn’t any more pressure. Now I just go out and play. We’ve got some good players and we’ve won quite a few more games than we did when I was a sophomore. It’s been a lot of fun.”

Still, running is even more enjoyable for her than basketball.

She got involved in running later than most girls who win championships and earn scholarships. Her father talked her into trying it, and she hadn’t been working at it long when she had a stunning freshman victory in the 2018 Rowan County Championships, clocking 20:53 at Dan Nicholas Park. She led South to county and conference championships and was Rowan County Runner of the Year.

That was her only county title, but she’s had steady finishes in the county meets since them — fourth as a sophomore, fifth as a junior and fourth as a senior.

As a junior, she led the South team that qualified for the 2A State Championships. She was the Central Carolina Conference Runner of the Year.

She was an individual state qualifier as a senior and ran 21:44 in Kernersville.

“I could tell from her first cross country practice as a freshman that she had natural talent,” South coach Rebekah Julian said. “During her running journey, her love for the sport has continued to grow. She’ll continue to improve in college. She’s got a lot of PRs ahead of her.”

Rymer would like to have a dollar for every person who is shocked that she’s not planning to play college basketball. There are a lot of schools where she could play.

At Columbia International, she would have the opportunity to team up with North Rowan’s Hannah Wilkerson, but Rymer’s heart is set on running.

When this basketball season ends, Rymer will be joining her South track and field teammates.

As a junior, she placed third in the 800 and fifth in the 1600 in the Rowan County Championships. Those will probably be her main events. this spring.

“It’s not easy to put into words, but I love running and I love the people that are involved in running,” Rymer said. “I think at some point you have to decide what it is that you really love. I’ve made that decision.”

She took a visit to Gardner-Webb. There was some mutual interest between Rymer and Lenoir-Rhyne and Catawba’s cross country/track programs before she committed to Columbia International.

She makes fine grades and plans to enter the nursing program at CIU.

“I’ve always been fascinated by the medical field,” Rymer said. “Being a pediatric nurse, working with kids, helping kids, that would be a dream career.”

She’s got some experience with that. She’s helped some South Rowan kids have a pretty good basketball season.