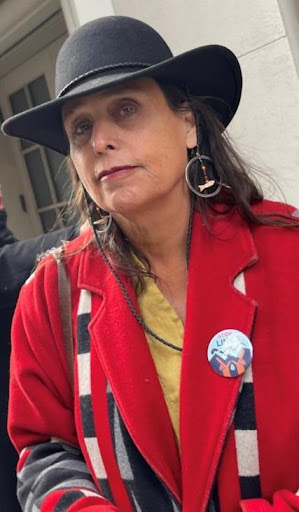 LaDuke has worn a number of hats over the years. She is an economist, writer, activist and a hemp farmer. She holds degrees from Harvard and Antioch universities.

She is most known for her activism with Native American populations and organizations such as Indigenous Women’s Network and Women of All Red Nations. She founded White Eart Land Recovery Project in 1989 with the goal to buy back land on the White Earth Indian Reservation and build the reservation’s economy. The nonprofit has other goals for the land like reforestation and reviving traditional agriculture.

She also cofounded Honor the Earth, an organization which took part in the Dakota Access Pipeline protests in 2016 and she is a former vice presidential and presidential hopeful.

She ran on Ralph Nader’s 1996 and 2000 presidential tickets for the Green Party.

She is an author of eight books and a co-author of a dozen others in addition to essays published in periodicals.

Catawba’s Equity, Diversity, Justice and Inclusion Task Force is partnering with the Salisbury-Rowan NAACP and the college’s Department of Environment and Sustainability to bring LaDuke to the campus.

EDJI co-chair Mercedes Quesada-Embid said she first met LaDuke when she spoke at the university Quesada-Embid worked for at the time.

“I had been following her since I was in college,” Quesada-Embid said.

She was inspired by the early work LaDuke was doing on the intersections of social and ecological issues. At Quesada-Embid’s previous institution in Colorado, she was looking for people that exemplified what was taught in her sustainability studies program. So, she asked LaDuke to do a workshop at the college.

LaDuke spent two days at the college, and people traveled long distance to take part. Since then Quesada-Embid has received more direct access to LaDuke. But getting her to come speak at Catawba is more than two years in the making.

Quesada-Embid first contacted LaDuke in fall 2019, hoping to get her to visit around Earth Day in 2020, but the COVID-19 pandemic cancelled those plans. It has taken two years since then to reach the right point in the pandemic and LaDuke’s schedule.

On Wednesday, morning LaDuke will hold a breakfast workshop with students so they have the chance to have more one-on-one time with her.

LaDuke’a talk will be open to the public on Tuesday. It will begin at 6:30 p.m. at the college’s Peeler Crystal Lounge in the Robertson College-Community Center. Register online at shorturl.at/twHRZ