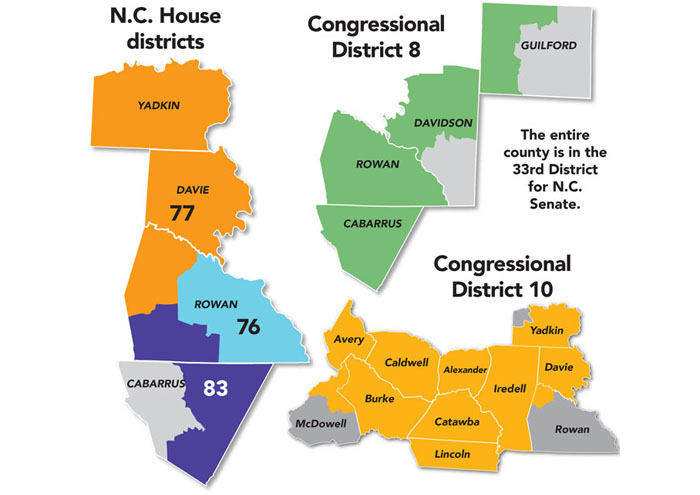 In November, state lawmakers adopted new state and congressional district boundaries using 2020 Census data, but lawsuits alleged gerrymandering immediately after. The North Carolina Supreme Court in February ruled state courts could throw out district lines that secured a Republican advantage in a closely divided state. The ruling then directed the Republican-led General Assembly to redraw maps no later than Friday and provide an explanation of how they calculated partisan fairness.

The new maps received approval before the Friday afternoon deadline, and now head to a three-judge panel of the Superior Court for review. The panel has until Feb. 23 to render a decision, with candidate filing scheduled to resume Feb. 24 if the maps are approved. Assisting the panel are three appointed “special masters” who will help analyze the maps. Those include former UNC system President Tom Ross, who’s a former Superior Court judge, along with former state Supreme Court justices Bob Orr and Bob Edmunds. Ross is a Democrat, Edmunds is a Republican and Orr is now unaffiliated and formerly Republican.

The N.C. Senate and congressional districts passed mostly along party lines, but the state House maps passed 115-5 in the House and 41-3 in the state Senate.

The new District 83 is slightly different from the version on maps struck down by courts. Before the court ruling, the district contained the southwestern portion of Rowan County and the northwestern corner of Cabarrus County. It has been redrawn to include the southwestern portion of Rowan County and the eastern area of Cabarrus County. The district doesn’t have an incumbent, and a number of Republicans have made bids for the seat in the 2022 election. Those include former Rowan County Republican Chairman Rev. Brad Jenkins, China Grove business owner Grayson Haff and physician and veteran Grant Campbell.

The new district may alter election plans for Campbell, who lives in northwestern Cabarrus County. The Post was unable to confirm his election plans by deadline on Friday.

Sasser, who represents portions of Rowan, Stanly and Cabarrus counties, told the Post the new map “messed up all of Cabarrus County,” he said, and questions why it was shifted. In particular, the redrawn district has excluded some candidates, like Campbell, from being eligible to run, Sasser said.

Sasser added that, though he’s not an expert and wasn’t part of the redistricting committee, the maps don’t look as simple now as they previously did before the court order. But he added that working to achieve a vote of 115-5 in the House “takes a lot of compromise.”

Ford said the area covered by District 83 has changed so often in recent years that constituents can’t get used to a representative, which makes it harder to work with towns and cities. He said the newly drawn lines “hurt both counties” because initial maps better grouped those constituents.

The new maps show Sasser, if re-elected, will represent a district that includes all of Stanly and Montgomery counties — meaning he won’t be part of Rowan County’s delegation after the 2022 elections.

Sasser told the Post it’s challenging to represent only portions of counties. Since election to the House in 2018, Sasser said he’s yet to represent all of his home county in Stanly. So, he’s happy for that change. But he’s also enjoyed representing portions of Rowan County, which is full of great people who are a lot like his constituents in Stanly, Sasser said.

In the new maps, District 76 appears to cover all of eastern Rowan County up to Salisbury, Spencer, East Spencer, Granite Quarry, Faith and southeastern Rowan County. The new District 77 would contain the northwestern and central-western portions of Rowan County as well as all of Davie and Yadkin counties. Howard, however, is double-bunked in District 77 with Rep. Lee Zachary, a Republican who currently represents parts of Forsyth and Yadkin counties. That means the two could be competing candidates for re-election in 2022.

Warren declined to comment on the maps until they’ve been finalized by courts and ongoing litigation is resolved.

Ford said he feels confident the newly drawn maps will meet the judges’ satisfaction and said the maps are fair and legal. However, he criticized House maps for not looking as compact as the original maps drawn for 2022.

The northwestern tip of Rowan County will be part of the 10th Congressional district, which also includes all of Lincoln, Catawba, Iredell, Davie, Alexander, Caldwell, Avery and Burke counties. It also covers the northern portion of McDowell County and all but the northwestern portion of Yadkin County. In the new maps, U.S. Rep. Ted Budd is double-bunked in the 10th Congressional district with Rep. Patrick McHenry, both Republicans, but Budd is running for the U.S. Senate.

Rep. Richard Hudson is the only incumbent in the redrawn 8th District. During the December filing period, Hudson filed for the 10th District, which would have covered Rowan County in the originally drawn maps.

Michael Bitzer, politics professor at Catawba College, said Rowan County has gotten used to being a part of multiple districts. He referred to the new 8th Congressional District as another “Interstate 85 district” because of how it stretches. But it also makes sense for the voting behavior of those constituents, he said.

Statewide, the maps look “shockingly competitive,” Bitzer said. While the maps aren’t as compact, Bitzer said drawing competitive districts is a challenge because many areas have voters who are party loyalists. The 8th District is a 57-41 Republican district, so a candidate like Hudson can feel comfortable based on past election data, he said.

Bitzer said the new congressional maps include three competitive districts that lean Republican, four that are competitive but lean Democratic and two that are nearly a 50/50 split.

What happens next is up to the courts, Bitzer said. Plaintiffs in the ongoing lawsuits will have a chance to present their maps, and both sides can comment on the presented maps. Questions remain about what plaintiff maps will look like, analyses special masters will run and the final interpretation from the panel of judges. Either party could file an appeal regardless of the ruling, which could further delay the 2022 election schedule.

“Right now, we just need to let the process unfold,” Bitzer said. “Too many unknown unknowns.”