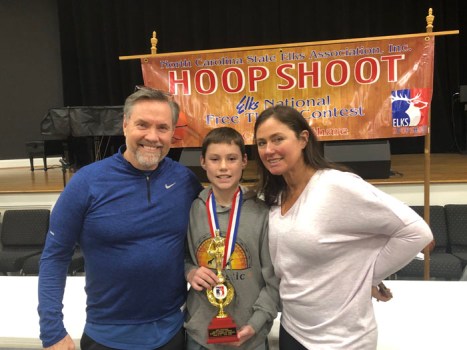 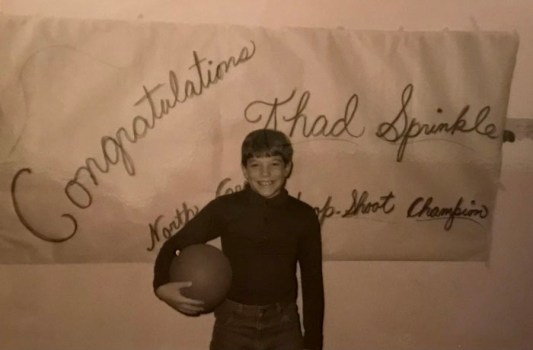 Thad Sprinkle was a champion in 1984 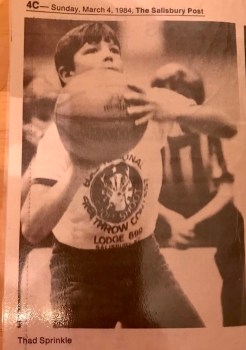 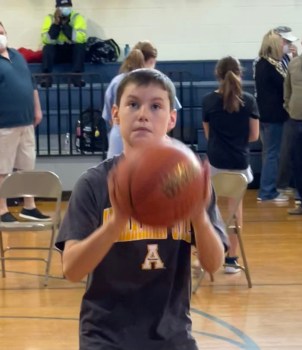 Bryant Davis heads to Chicago for the next round of competition. Submitted photos

GREENSBORO — Bryant Davis netted 21 of 25 free throws to win the State Hoop Shoot Championship in the Boys 12-13 age group on Feb. 12. Next stop for the 13-year-old student athlete from Salisbury Academy is the Regional Hoop Shoot on March 12 in Fredericksburg, MD.

“All the guys were making their shots, so I felt more pressure,” said Bryant, who had to regain his rhythm midway through the second round. He credits his mental toughness as the key to calming his nerves and getting his form back.

“When I missed a couple of baskets, I knew I had to make the next six to take the lead.  I made all of them, but it wasn’t over. I had to sit and wait for the last guy to finish. He ended up scoring 20 of 25 and in a 3-way tie for second place. It was so close. One basket made all the difference.”

Bryant’s dad, James, got him interested in the contest in 2020.

“One Sunday afternoon, I saw the Hoop Shoot info in the Salisbury Post. I gently suggested participating in the local event at Hall’s Gym. We do a lot together, and Bryant liked the idea. Two years later, here we are, headed to the regionals. I’m so proud of him,” James Davis said.

He has been coaching his son since age 6. “We started in the YMCA and Salisbury Parks and Recreation leagues. Bryant was talented and loved the game. We had a great time together, often winning and enjoying the friendships we made,” he said.

Bryant was part of the undefeated Salisbury Academy championship basketball team this year.

His mom, Andrea Bryant Davis, shared the same commitment. “Bryant has gained a lot of confidence. He plays a lot of team sports and is a talented athlete. The Hoop Shoot gives him the opportunity to shine as an individual,” she said.

But she admitted that nervous energy got the best of her during the competition. “I had to step out for a minute, take a deep breath and walk off some stress. This is an intense individual competition. There’s nothing quite like it. The gym is totally silent while each player competes. You can feel the growing tension for the competitors and their families. As much as I want Bryant to win, I like to stay positive and encourage all the players to do their best,” she said.

Since 2018, Liz Tennent has served as Hoop Shoot director for the Salisbury Elks Lodge No. 699. This was the first time she got to see a competitor advance to the regionals. “I’m so happy for Bryant and his family. It’s a first for him, and it’s a first for me,” she said.

“What I remember most is how well all the people with the Elks organization treated us,” said Sprinkle, former East Rowan standout in multiple sports who lives in Rockwell. “Everything was great — the activities, food, promotional gifts, and, of course, the competition. One night, I got to see former NBA star David Robinson play one of his college games at JMU. We had an amazing time.”

The 2022 Elks National Hoop Shoot Finals — 50th Anniversary is April 30 in Chicago. Sprinkle offered encouragement and advice to Bryant. “Go and enjoy the whole experience. Have confidence in yourself and stick with your routine. Dribble it, spin it, then shoot it in the hoop. I hope you win the regionals, get to Chicago and bring the national championship home to Rowan County.”