At Main Street Marketplace, Joseph Zacarolo makes the most of a second chance 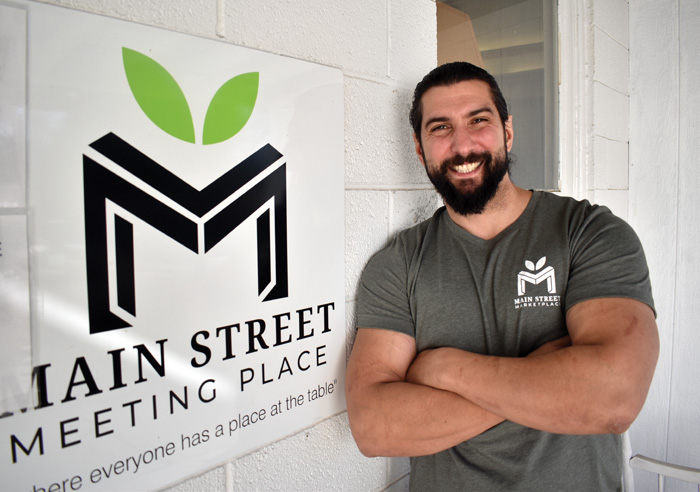 Joseph Zacarolo has become a leader at Main Street Meeting Place, where he uses his personal experience to help others who are re-entering society after incarceration. Ben Stansell/Salisbury Post

He rapidly converted months to years.

On Dec. 20, 2006, the then-22-year-old was sentenced to about as many years in prison as he’d been alive. Zacarolo was found guilty on a number of serious charges, all stemming from a violent incident the year prior. At the time, Zacarolo justified his actions by telling anyone who would listen he did it to take revenge for a loved one. He saw himself as a hero.

After the judge delivered the crushing sentence, he asked Zacarolo if he’d like to say anything in front of the court. Zacarolo leaned forward.

Zacarolo spent the next 14 years of his life in multiple federal penitentiaries. When he was released from confinement in 2020, the 36-year-old man was restarting his life from scratch.

Zacarolo discovered a new purpose at Main Street Marketplace and Meeting Place, a nonprofit based in China Grove focused on improving the community by giving people a place to meet and grow. In addition to an equitable market that offers healthy, locally-sourced foods on a pay scale, Main Street offers classes that help people re-enter society after incarceration or recover from substance abuse.

Zacarolo assumed a leadership role at Main Street, teaching classes to people like him who are looking to make the most of another opportunity.

“I’m moving in the right direction,” he said.

Zacarolo was born in Stamford, Connecticut, but he grew up in nearby Bridgeport. In the mid 2010s, the city was near the top of Bloomberg’s list of the richest areas in the county. Zacarolo didn’t see the city through that lens.

“The part of Bridgeport I’m from, the (millionaires) don’t live there,” Zacarolo said. “It’s a very low-income neighborhood. Lots of crime, gangs, drugs.”

When his grandmother saved enough money from cleaning houses, she moved to the Kannapolis area and bought some land. At 14 years old, Zacarolo moved in with her and started school at Corriher-Lipe Middle. The move was meant to help him escape from the potentially dangerous environment he grew up around.

Almost immediately, he didn’t fit in.

“I was poor. I was embarrassed,” Zacarolo said. “The clothes I wore weren’t the greatest and you either have to embrace it or you don’t. And I embraced it.”

He found his niche as the “cool kid” who cut class.

That landed him in trouble over and over again. Zacarolo spent a month in a youth detention center near Gastonia after a violent run-in with the school security guard. In the ninth grade, Zacarolo was unenrolled from South Rowan High School because he missed so much class time. With time on his hands and no academic future to speak of, Zacarolo started working at a restaurant in Mooresville.

Just a teenager, he often found himself playing bouncer at the bar and grill.

“They liked to stay open until 12 or 1 a.m. on Fridays and Saturdays,” Zacarolo said. “So, 16-year-old Joe found himself at odds with grown, drunk men.”

A scuffle with several customers resulting in a broken car windshield led to Zacarolo’s first true encounter with the criminal justice system. It also resulted in him leaving home. Zacarolo moved in with a girlfriend and started a family. But without a high school education, he struggled to carve out a career for himself.

“I’m a high school dropout. I’ve got no recorded academic achievement. I have no marketable trait,” Zacarolo said. “I found myself going from factory job to factory job.”

Zacarolo was arrested again a few years later for much more serious charges after he was part of an attack on a Kannapolis home. Zacarolo got out on bond, but he soon lost control of his anger again and was charged with destruction of property. He was homeless for a period of time, living in his car in the parking lot of grocery stores.

“I watched my life deteriorate,” Zacarolo said. “I lost it all.”

Life on the inside

Zacarolo started his sentence at a medium security prison in Bennettsville, South Carolina. He remembers the violence he witnessed among other inmates.

“People got stabbed, people got beat up,” Zacarolo said. “Luckily nobody died when I was there.”

At first, Zacarolo wasn’t interested in rehabilitation. He was only focused on getting by without getting into too much trouble.

“I didn’t have a good attitude at the time,” Zacarolo said. “To be blunt, I looked down at a lot of people.”

Over time, his attitude changed.

“Even with my poor disposition at Bennettsville, I still realized I needed to do something with my time,” Zacarolo said.

Zacarolo signed up for continuing education courses and started studying math, politics and law, paying attention to the same subjects he neglected in high school. Exercise became an equally important part of his regular routine. He continued to focus on self improvement even after he was relocated two years later to prison in Jesup, Georgia. He secured a job in the prison’s library and started taking algebra and English courses.

“I really solidified my foundation for my education,” Zacarolo said.

When Zacarolo’s custody level was reduced from medium to low security, he again was relocated — this time to a facility in Petersburg, Virginia. There, he earned certifications in the carpentry and machine shops and began to teach classes. He took on a mentorship role in a drug prevention program and started tutoring others who were in pursuit of their GEDs. He also became a certified fitness trainer.

In early 2020, Zacarolo attended a virtual hearing during which he was released from his sentence several years early due to a change in federal law. At the end of the hearing, a judge once again asked Zacarolo if he had anything to say.

“I said, ‘You know what your honor? The last time I was sentenced, they asked me if I had anything to say for myself and I said no. I said no because I didn’t think there was anything I could say for myself. I was a high school dropout loser,’” Zacarolo recalled. “‘Now, your honor, I’m a GED instructor. Now, I’m a non-residential drug treatment specialist mentor. I’m an ACE instructor. I’m a master fitness instructor through the ISSA.’ I just started listing all of my achievements. I said, ‘Your honor, I’m proud of that. I did all of this while incarcerated in prison.’”

Zacarolo returned to Kannapolis after his release.

That same friend told Main Street’s executive director, Hope Oliphant, about Zacarolo’s journey and that he might be interested in becoming an instructor. Zacarolo and Oliphant set up a meeting, and the rest is history.

“We’ve been rocking and rolling ever since,” Zacarolo said.

“The best leaders, we’ve found, are ones that can truly relate to the experiences of the participant’s lives,” Oliphant said. “Not only does Joseph relate but he also possesses a sense of purpose and passion for helping others.”

In addition to his roles with Main Street, Zacarolo works at the Carolina Center for Recovery and is a student at Rowan-Cabarrus Community College. He’s also on his way to earning his associate’s degree in general education.

More information about Main Street Marketplace can be found at marketandmeeting.org.