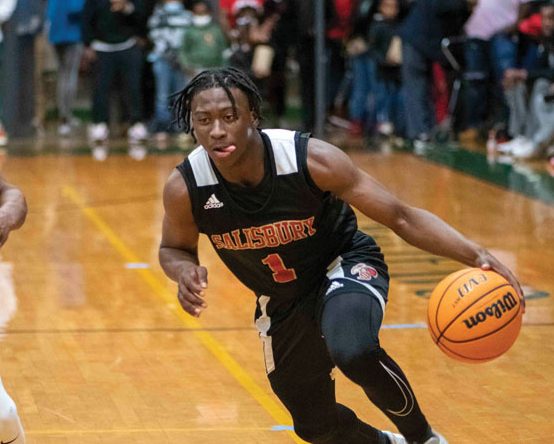 Salisbury’s Deuce Walker had a career high of 13 points Friday night in the victory. FILE PHOTO By JON C LAKEY / FOR THE SALISBURY POST. 2/11/22, Spencer,NC.

LEXINGTON — After 10 years of languishing in the CCC’s back seat, Salisbury’s boys basketball team has taken the wheel.

In a gritty battle that felt more like a contest of will and endurance, the Hornets captured their first conference tournament title since 2012 Friday night at Lexington High — where they extracted an 83-68 championship-game victory over Thomasville.

“We knew it wasn’t going to be easy. That’s a team that beat us,” winning coach Bryan Withers said, moments after Salisbury (18-4) used a 13-3 finishing kick to best the regular-season co-champion Bulldogs. “We wanted to play them again. They’re a good team, but we feel like we didn’t bring any kind of a game last time. We didn’t bring our ‘A’ game or our ‘B’ game. We looked bad and we felt bad, but it was much-needed. It humbled us.”

Salisbury returned the favor in dramatic fashion, placing four scorers in double figures and fending off a fervent Thomasville comeback. The Bulldogs, who trailed by 18 points entering the fourth quarter, inched within 70-65 when junior guard Janhri Luckey — a 5-foot-6 action figure in shorts — hit a jumper from inside the lane with 3:28 remaining. He scored 15 of his game-high 27 points in the final period.

“He makes big plays and he’s a really good distributor and facilitator for other people,” said first-year THS coach Ann Ferguson. “Something we didn’t do a great job of tonight is stretching the floor and getting the ball out in transition. That’s where he’s really, really special.”

Salisbury had no answer for Luckey, who weaved in and out of traffic like a Porche on an L.A. freeway. The Hornets were paced by usual suspects Juke Harris (25 points) and Cam Stout (14 points, 4 assists), but their supporting cast was asked to spend some time in the spotlight. Sophomore Deuce Walker contributed a career-best 13 points and 10 rebounds. Reserve forward Dashaun Brown added eight points and 10 rebounds. And hard-nosed guard Mike Geter made his only second-half basket memorable when he snared an offensive rebound and hit a stickback, providing a 47-35 Salisbury lead early in the third quarter.

“We talked about that in the locker room,” Withers said. “I said to Deuce and Mike, ‘It’s gonna have to be one of you guys,’ because everyone knows Harris and Stout are gonna do what they do. Most teams are gearing up to stop those two. So it was going to have to be someone else.”

Someone like Walker, who scored on six layups and a free throw. Two of his buckets came during a decisive 16-5 spurt that closed the first half and gave the Hornets a 43-35 edge at the break. “We were ready and prepared to help,” Walker said.

So was Brown, a 6-3 sophomore who sparked a third-quarter push. Salisbury opened a double-digit lead when Hank Webb drained his second 3-pointer late in the stanza. Harris closed the quarter with two had-to-have-them baskets — a steal/fastbreak layup combination followed by a 3-ball from the side pocket that made it 65-47.

Stout was the player clutch time couldn’t contain. Thomasville (19-5) used a 10-2 flurry to close within five points before Luckey’s rainbow three from the left side kept the Bulldogs close. Stout stopped the bleeding with a pair of free throws, extending the lead to 75-68 with 2:11 to go. He followed that with an acrobatic tip-in from the left block, a drive down the lane for a layup and finally a one-handed putback that produced a 13-point advantage with 28 seconds left.

“I just really had to hit those offensive boards,” he said. “I went in there and cleared it up.”

Salisbury did the same with the championship plaque.

“Hey, we took some ill-advised shots,” Withers concluded. “We had some turnovers at the wrong time. But a team as good as Thomasville is going to push you right until the end. And they did.”

NOTES: Thomasville, winner of its previous eight games, will host a 1A state playoff game. The Bulldogs were ranked No. 3 in the latest 1A-West poll. They were 8-0 in February and hadn’t lost since falling to Salisbury on Jan. 31. … SHS will open the 2A playoffs at home on Monday or Tuesday. The Hornets have won three straight games and 16 of 17 since Dec. 17. …Thomasville was held scoreless for the final 2:27.