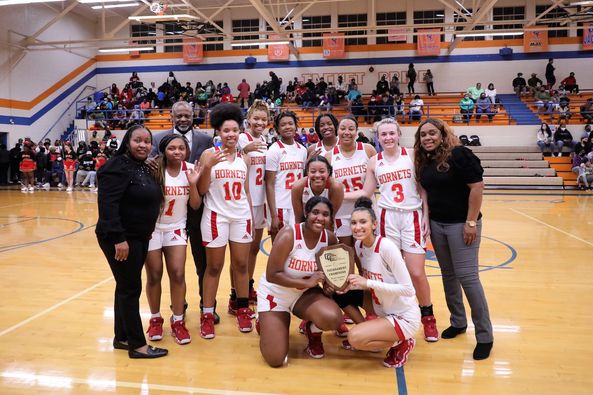 That’s how well the Hornets are playing right now. It’s called peaking at the right time.

Credit the Hornets (22-1) with their third straight CCC tournament title under Brice’s guidance and the 10th in program history.

Credit North Rowan coach Anthia Smith’s seven-person squad for fighting back from that disastrous beginning to make it a ballgame.

The Hornets limited the explosive Cavaliers to nine field goals for the game and took a 59-38 victory.

“We hit them early — and we hit them late, too,” said Salisbury junior Kyla Bryant, who scored 24 points. “Our main focus was defense. Defense is going to be a big part of the playoffs for us.”

Second-seeded North (18-8) had to make a terrific comeback to survive a Lexington upset bid in an overtime semifinal on Thursday. Salisbury won its Wednesday semifinal overwhelmingly against West Davidson and had a large advantage as far as rest. That had to be a factor in Salisbury’s lethal first six minutes that put the Cavaliers in an impossible hole.

“We’d just played an amazing game the night before — and we went away from that,” Smith said. “We came out real flat. We were out of position.”

Salisbury’s strength is defense, but the Hornets came out making everything. They made four 3-pointers in the first quarter. Bryant hit three.

“I told the team we had to win the first four minutes with intensity on defense,” Brice said. “But what happened was the opposite. We were getting the looks we wanted and we got going really fast on offense, Our defense fed off our offense.”

Salisbury led 38-6 when North scored a dozen unanswered points to get back to 38-18. That’s probably the first time this season someone has scored 12 straight against the Hornets.

“They didn’t go away,” Brice said. “We weren’t patient enough and took some quick shots.”

Both teams were quiet on offense in a low-scoring third quarter.

Huntley who is a major part of Salisbury’s hopes for a playoff run, appeared to tweak a knee and left the game for good with 6:41 left. She had just returned from an injury to play in the tournament.

The Hornets went to their delay game after a timeout. Rachel McCullough got a layup and a made a tough shot in the lane to push the lead back to 21. Jaleiah Gibson hit Bryant with a long pass for the layup that made it 59-36 with 1:03 remaining.

North was shut out for a four-minute stretch in the fourth quarter.

“That’s what this team can do,” Brice said. “It can play defense.”

Representing a split league, both teams will be seeded as conference champions for the playoffs, with Salisbury in 2A and North Rowan in 1A.

Both have earned nice seeds and home playoff games.

“Our girls have played seven-strong all season,” Smith said. “I think we’ve shown we can compete and play tough in big games. We’ll be ready for the playoffs.”

Playoff pairings will be released today. The playoffs start Tuesday.

David Shaw contributed to this story.