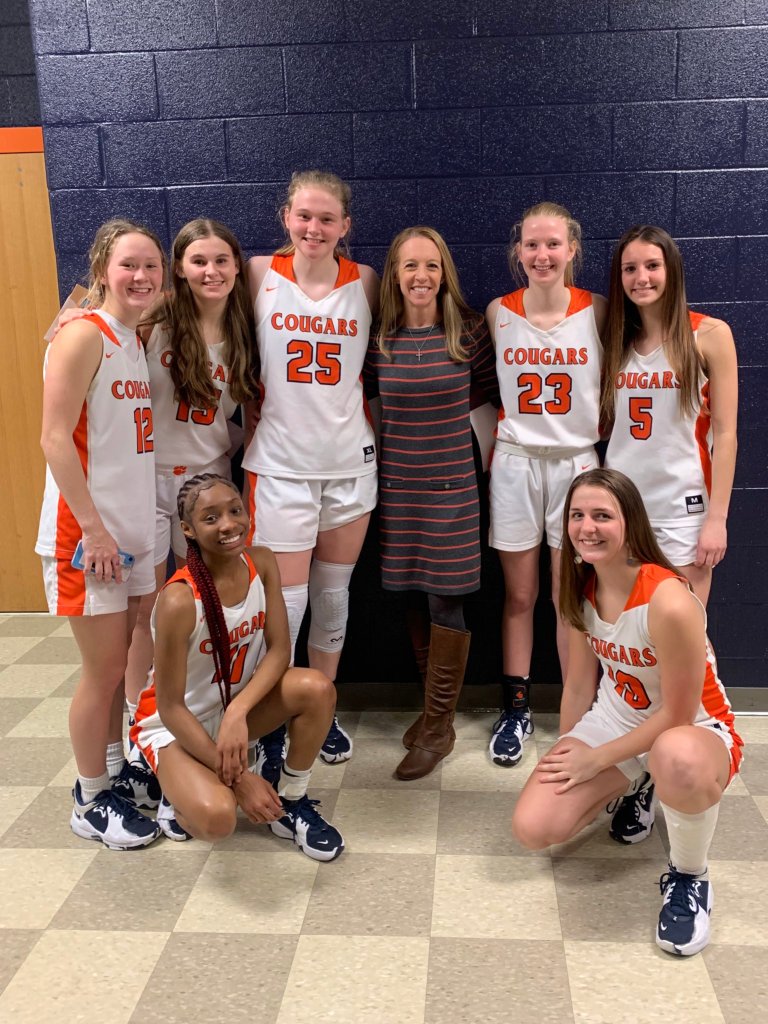 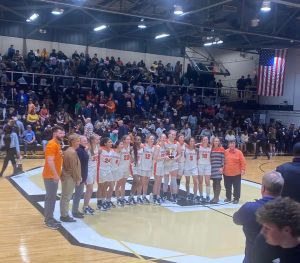 Truth be told, they had a rough week in Concord’s historic Rimer Gym. They didn’t scare any upcoming playoff opponents who scouted them.

Nonetheless, the Cougars are champions. One more time.

Riley Isley made the second of two free throws with 8.5 seconds left to seal it for the Cougars.

Aliayah White scored 14 points. Mary Spry had 13 points and eight rebounds for Carson (22-3) The Cougars have won their last 13.

“We weren’t sharp at all this week, but we battled through the tough parts in both of our tournament games,” Carson head coach Brooke Stouder said. “Hey, it’s not going to be all roses every day. Sometimes you have to grind it out.”

The latest championships add  to what has been quite a run for a program that installed Stouder at the helm when the school opened. This is her 16th season.

Carson peaked last season with a phenomenal squad that sliced opponents to ribbons with exceptional ball-handling, passing, defense and shooting, went undefeated and won the 3A state championship.

It’s been a bumpier ride this season, more ups and downs, more shaky halves and ugly quarters, but the Cougars have stayed among the best in 3A with a new cast of characters. Carson still has two really good basketball players in Catawba signee Mary Spry and Hannah Isley. The rest are athletes from the venues of cross country, tennis, softball and track and field. They’ve provided the necessary numbers, competitiveness and willpower to win championships.

Carson seniors Camden Corley, Makayla Johnson, White, Riley Isley and Kendall Barbee had combined for 152 varsity points coming into this season. Johnson, who swings a mean softball bat, and Riley Isley , a  soccer star and Pfeiffer tennis signee, didn’t play basketball at all as juniors. This is the first time these girls have been on the floor at the end of close games.

“For this group, winning a conference championship was a very big deal and to win this tournament against a very tough Northwest team is a very big deal,” Stouder said. “To start a season with only two players with any real experience, and to be champions as we near the end of it — that’s been something to see. They’ve grown so much.”

It goes without saying that Stouder and the staff may have done their best coaching job this season, getting the most out of an eight-person roster and finding ways to win games in a league that has a number of competent teams.

Northwest (16-5) brings backcourt quickness and relentless rebounding and is a tough matchup for Carson in both of those areas. Carson’s only SPC loss this season was on a last-second shot at Northwest.

“The game plan was simple,” Stouder said. “Play 2-3 zone and take away the drive. Make them beat us from the 3-point line — and box out.”

It worked. Northwest shot 6-for-26 from the 3-point line.

Chaunesse Barringer, a guard with super-hero speed, was held to 10 points, two field goals and no layups. Barringer had scored 30 against West Rowan in the semifinals.

Carson got off to a brutal start offensively, but was only down 8-5 after a quarter.

“Defensively, we’re usually pretty solid,” Stouder said. “But we did have a super-slow start on offense. We were turning it over and getting in foul trouble.”

The game began to swing in the second quarter. White was the catalyst for Carson. Rowan County’s top track and field sprinter last spring, there are nights when she gets it going on the basketball court — and it’s not just steals and layups. She’s got a nice shot, and she was on. White scored eight points in the second quarter. She shot 6-for-9 for the game. She pushed the Cougars to a 24-22 halftime lead.

Spry is a 6-footer who can play any position for the Cougars, including point guard. Stouder called on her ball-handling skills more in the second half.

Carson took a 38-35 lead to the fourth quarter.

With Carson clinging to a 48-43 lead, Hannah Isley took a charge on a Northwest layup and Johnson blocked a 3-point attempt.

With Carson leading 48-44, Spry blocked a transition layup attempt that could have cut the Cougars’ lead to two.

Northwest missed a 3-pointer to tie. Riley Isley secured the rebound for Carson.

Corley missed two free throws with 15.8 seconds left, but her second miss took an extra bounce on the rim, and Spry and Johnson were able to keep it alive. Johnson chased the ball down in the corner.

Riley Isley was fouled with 8.5 seconds left. After a brief conversation with Stouder, she made the clinching free throw.

When Northwest missed a 3 with about 4 seconds left, Johnson got the weak-side rebound, was tackled and made two at the line for the final tally.

Carson was 14-for-23 at the foul line. Freshman Allie Martin, the only non-senior, provided some good minutes with teammates in foul trouble.

“We had to survive 21 turnovers and they had 16 offensive rebounds,” Stouder said. “But we battled. We did a good job of playing through all of it.”

Now they own one more championship.

Playoff pairings are coming later today. Carson will play at home on Tuesday.