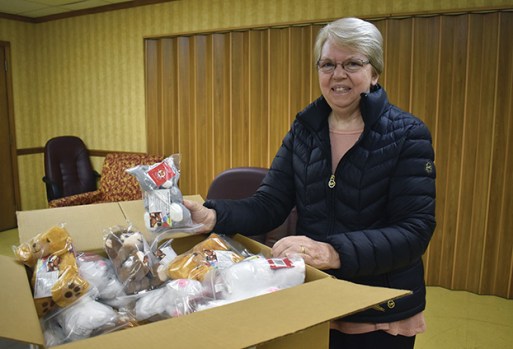 Elaine Williams holds up an elephant from a box of stuffed animals. The box will be delivered to a local healthcare facilities and the animals will be given as a comforting gift to patients. Ben Stansell/Salisbury Post 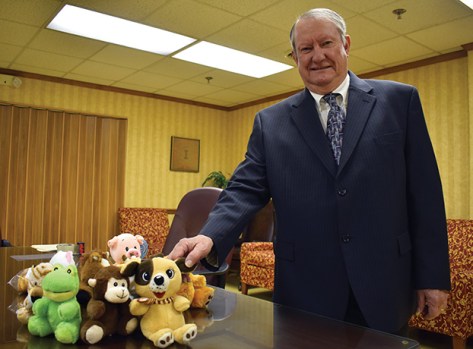 Richard Williams was inspired to start Furry Hugs after seeing how a small stuffed dog helped his wife during a medical emergency. Since the nonprofit was launched in 2014, Furry Hugs has donated thousands of stuffed animals to local hospitals. Ben Stansell/Salisbury Post 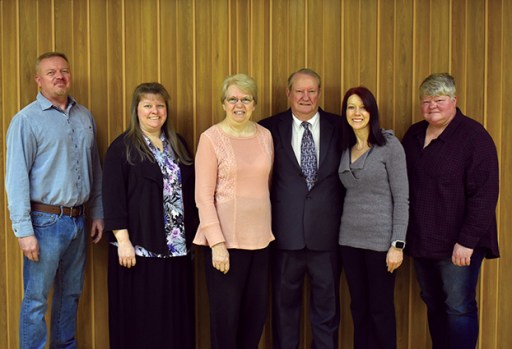 SALISBURY — About four decades ago, Elaine Williams was admitted to Forsyth Medical Center for what promised to be a routine procedure.

It would prove to be anything but.

Elaine’s body reacted poorly to the surgery, surprising doctors and turning the low-stakes affair into a matter of life and death. As Elaine struggled in the intensive care unit, her husband Richard worried about the family’s four young children. Searching for some way to give Elaine comfort and a little encouragement, he bought her a small stuffed dog from the hospital gift shop.

Elaine held onto the palm-sized dog, which she named ICU, for the entirety of her harrowing multi-week stay at the hospital.

“It’s really strange, but something like that little dog there gave her the courage to get better,” Richard said.

Elaine eventually recovered and went back to living a normal life, but her family never forgot the traumatic experience. And ICU the dog remained a comforting fixture at their home.

Years later, Richard found himself thinking about the stuffed animal while driving past a construction site that would become Davie Medical Center. He was out to pick up pizza, but the trip turned into an epiphany.

Looking at the unfinished skeleton of the building, Richard thought about the patients that would be treated there. Some of those patients might like to have a stuffed animal, he thought.

In that moment, Furry Hugs was born.

Elaine and Richard officially launched the nonprofit in 2014 with the goal of distributing stuffed animals to hospitals and healthcare facilities across the state.

Over the past eight years, that’s exactly what they’ve done. Furry Hugs has provided miniature giraffes, frogs, pigs, dogs, bears and other plush playthings to patients young and old being treated for anything from a sprained ankle to terminal cancer. In 2018, Furry Hugs delivered a 3,383 stuffed animals.

“These teddy bears are a way Elaine, myself and our children can give back,” Richard said.

Furry Hugs is primarily run by Richard, Elaine and their daughter, Tina Williams, who oversees the nonprofit’s social media and website. Richard and Elaine’s other three children, Richard Jr., Candy and Wendy, pitch in as well. The organization is funded entirely by donations. No one gets a salary. All of the money received goes directly to purchasing stuffed animals.

When Furry Hugs gets a new shipment of animals, the Williams family and several volunteers gather at 1310 Richard St. to package them. Everyone gathers around a table in a conference room, assembly-line style, and packages each individual stuffed animal into its own ziploc bag before placing dozens of the toys in cardboard boxes. In a matter of hours, the family and the volunteers typically bag several hundred animals. On one especially productive day, more than 800 animals were packaged, ready to be delivered to a hospital.

The nonprofit currently provides stuffed animals to about 10 different healthcare facilities in the region. Furry Hugs tries to stay as local as possible. However, Richard said he would never turn down a request for stuffed animals from a hospital, no matter where the facility might be located.

Deliveries are made in-person by Elaine, Richard or Tina. That’s when they get the chance to hear uplifting stories about the impact their small animals are making. One time, a hospital volunteer told Elaine that he’d initially thought the animals were pointless. It didn’t take long for him to change his mind.

“After a week or two he said he was convinced that it was a good thing to do,” Elaine said.

The animals were originally intended to comfort children, but Elaine said they quickly realized another demographic was especially fond of the plush toys.

“The older (patients) don’t have as many visitors,” Elaine said. “A lot of them treat the stuffed animals like dolls and babies.”

A plush pig or soft frog is sometimes a child’s first stuffed animal after they enter the world. Other times, a Furry Hugs animal is what an elder individual may cling to in hospice care.

Before the pandemic, Furry Hugs hosted an annual Christmas event called Holiday Hugs. The Williams family and volunteers would gather at a nursing home and hand out stuffed animals.

“Some of those people who were 80 or 90 years old, you give one of those teddy bears to them and it was better than $1 million to them,” Richard said.

Tina recalls seeing the faces of patients with dementia light up as they got their present.

Furry Hugs has also given animals to sheriff’s departments for officers to use in case they have to remove a child from a dangerous situation.

The COVID-19 pandemic forced Furry Hugs to limit in-person hospital deliveries. However, the organization pivoted and started delivering animals to vaccine clinics, including Novant Health’s clinic at the J.F. Hurley YMCA in Salisbury. The animals have been especially helpful when vaccinating children ages 5-11.

“When my vaccinators give those stuffed animals to them, it’s amazing to see the way they change,” said Leonora Ver Halen, co-site lead of the clinic. “All the sudden tears dry up and you see smiles where you might’ve seen a scared look.”

Ver Halen said the clinic is very appreciative of the animals provided by Furry Hugs.

Furry Hugs is always looking for volunteers and is appreciative of donations, however much they may be. For more information, visit furryhugs.org. Online shoppers can support Furry Hugs by purchasing through Amazon Smile after designating Furry Hugs as the charity to benefit. Amazon donates 0.5% of the price of an eligible AmazonSmile purchase to Furry Hugs.

Elaine still has ICU, the little stuffed dog that started it all. 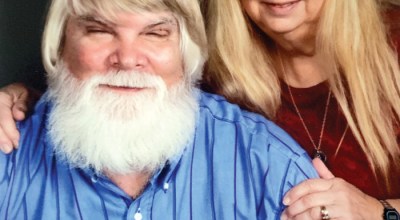