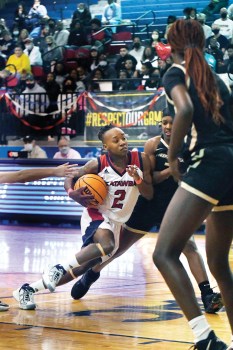 Catawba's Shemya Stanback gets around Anderson's Shameka McNeill on Saturday. Photo by Wayne Hinshaw, for the Salisbury Post 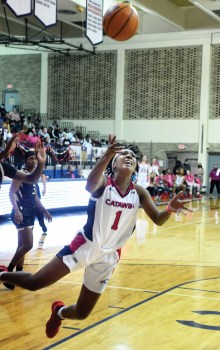 Catawba's Janiya Downs 1 tripped while driving to the basket., photo by Wayne Hinshaw, for the Salisbury Post 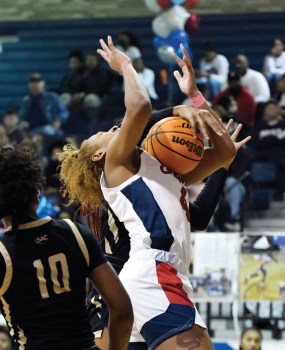 Catawba's Lauren Ford 4 get a hard foul from Samantha Michel 24 in back., photo by Wayne Hinshaw, for the Salisbury Post 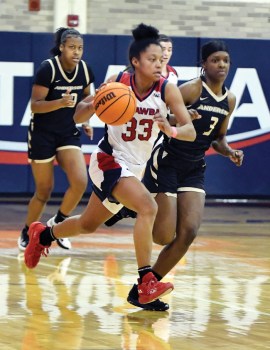 Catawba's Lyrik Thorne 33 on a fast break with Anderson's, Shameka McNeill 3., photo by Wayne Hinshaw, for the Salisbury Post

SALISBURY— Catawba’s women have been one of the best defensive teams in the South Atlantic Conference all season, but the Indians got lit up on their trip to Anderson on Jan. 5.

In that one, Anderson scored 37 in the first quarter and went on to beat Catawba 85-81. That’s the only time this season anyone has reached 80 against the Indians.

Revenge time arrived Saturday at Goodman Gym where the Indians locked up Anderson for a defensive-minded 58-46 victory that kept the Indians in the SAC race.

Catawba held the Trojans (18-9, 18-5) to 36-percent shooting and 4-for-16 from the 3-point line. Shameka McNeill, the SAC’s leading scorer, and Brittney Stafford combined for 56 points when Anderson outscored the Indians in January. On Saturday, they combined for 20 points on 7-for-19 shooting.

Catawba (20-4, 17-4) also shot only 36 percent and missed half of its 20 free throws, but the Indians did make eight 3-pointers. They also held their own on the boards against a team with two of the SAC’s top rebounders.

Catawba had a 20-12 edge in the turnover battle, which is usually the most critical stat for the Indians. Catawba had 12 steals to Anderson’s three.

Half of those Catawba 3-pointers came early. Lyrik Thorne, Janiya Downs, Lauren Ford and Taish DeShazo connected from long range as Catawba got the quick start it needed.

It was 13-all, but Catawba held Anderson scoreless for a long stretch in the second quarter, had a 7-0 run and took command.

Shemya Stanback beat the buzzer with a jumper for a 27-16 halftime lead.

Catawba never lost control of the game in the second half. The Indians led by 20 after a DeShazo 3-pointer with five minutes left.

Stanback, the former A.l. Brown star, had her best game in a long time with 12 points, 12 rebounds, five assists and only one turnover in 34 minutes.

Thorne also played heavy minutes and had another big scoring game. She provided 19 points on 7-for-15 shooting.

DeShazo was big with three 3-pointers and 11 points.

Mercedes Wampler made an impact off the bench with five steals and five rebounds.

Catawba plays at Mars Hill, the last-place club, on Monday.