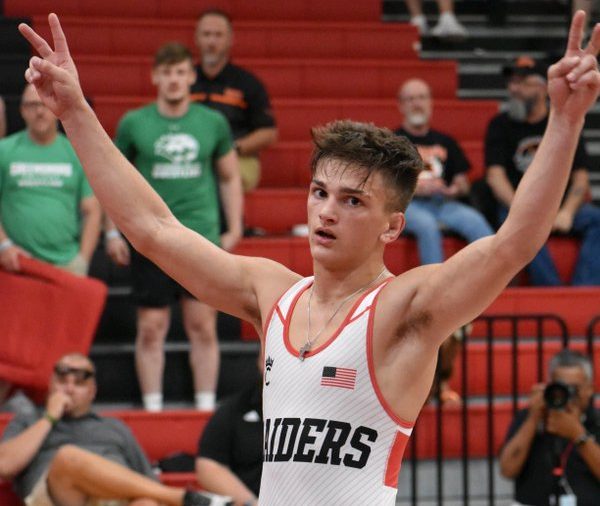 GREENSBORO — Three days of wrestling in the NCHSAA Championships got under way on Thursday with first-round matches.

The biggest story to follow is South Rowan senior phenom Jacob Cox, who is writing the final chapter of a storied career.

With South moving up to 3A for this school year, Cox faced different challenges, but he is undefeated this season at 138 pounds.

Cox won convincingly by technical fall (16-1) in his first round match.

South’s 106-pounder Mateo Diaz Ruiz won by pin in the first round.

The Falcons got off to a strong start on Thursday with four first-round winners.

CJ Harrill (170) lost his first match, but isn’t eliminated. He’ll be back in action in today’s wrestle-backs.

East Rowan siblings Leah Edwards (113) and Shayden Edwards (132) are making county history as a brother and sister act in the 3A State Championships, but both lost first-round matches.

East’s best hope for a podium finish is Luke Heglar (120). Voted Most Outstanding Wrestler at the Rowan County Championships. Heglar won a 4-1 decision in the first round.

In 2A, a couple of multi-sport Salisbury athletes, Reed Fugle (220) and Jaden Gaither (285), got off to good starts. Fugle won by pin, while Gaither took an 8-6 decision after his overtime match went to a sudden victory period. Gaither was a recent football signee with UNC Pembroke.

There’s a long way to go. Championship matches start at 4 p.m. on Saturday.