Women’s basketball: No. 24 UNC upsets No. 3 Louisville, No. 4 N.C. State cruises past Wake 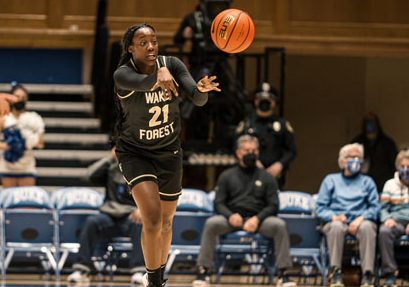 CHAPEL HILL — Kennedy Todd-Williams, Deja Kelly and their North Carolina teammates were determined not to let a big upset slip away.

The 24th-ranked Tar Heels fought to the horn to make sure it didn’t, too.

Todd-Williams knocked down the go-ahead free throws with 16.2 seconds left and UNC survived Louisville’s two final-play missed shots to topple the third-ranked Cardinals 66-65 on Thursday night, setting off a midcourt celebration of a win with significant implications in the Atlantic Coast Conference regular-season race.

Todd-Williams finished with 19 points to lead the Tar Heels (20-5, 10-5 ACC), who rallied from 10 down before halftime to end an eight-game skid against the Cardinals in dramatic fashion.

After Todd-Williams’ free throws, Louisville called timeout to set up a final play. As the clock dwindled down, Kianna Smith hit the front rim on a 3-point attempt. Chelsie Hall grabbed the rebound and tossed the ball up as she fell backward to the court. The ball crept around the rim from the right side to the left before slowly rolling off as the horn sounded.

The Tar Heels immediately mobbed each other, while Kelly (who scored 18 points) triumphantly motioned to the crowd for more noise.

But the Tar Heels controlled the boards to finish with a 42-32 edge, including 13-5 on the offensive glass, to offset their own 38% shooting.

“They got a couple of key offensive rebounds at the end there where we played really good, solid defense, then we’d let them get another shot up,” Van Lith said. “And it would either turn into a foul and some free throws or they’d knock down a shot, so I think that’s really what it came down to for us.”

Louisville: This was a setback in the Cardinals’ hopes of pressuring No. 4 North Carolina State for the league lead. Louisville entered the night only a game back in the win column, though the Wolfpack had won the only regular-season meeting to claim the tiebreaker. This loss snapped a run of seven straight wins — eight if counting a forfeit when Virginia couldn’t travel for last week’s matchup — and will make it difficult for Louisville to catch N.C. State.

“You’re still trying to compete for a double-bye in the ACC Tournament, and there’s still a lot of basketball left,” coach Jeff Walz said. “There are a lot of good teams in this league. It’s a matter of what’s your resolve? What are you able to do when you hit a little adversity?”

UNC: The Tar Heels entered this one jostling for position in the upper third of the league in hopes of securing a top-four seed and that double-round bye in the ACC Tournament. This was big, both on that front and for ending the long streak to the Cardinals.

With No. 3 Louisville losing earlier in the night at No. 24 North Carolina, the Wolfpack is closing in on its first ACC regular-season title since the 1989-90 season. The Wolfpack holds a 1½-game lead with two games to play.

The Wolfpack went into halftime up 39-25. That margin ballooned to 53-28 after N.C. State made three 3-pointers in the first 2½ minutes of the second half.