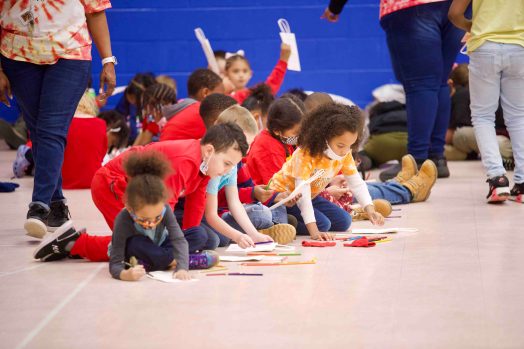 Carl Blankenship/Salisbury Post - Students in the gym filling out cards for health care workers. Several spaces in the school were overtaken with students working on care packages. 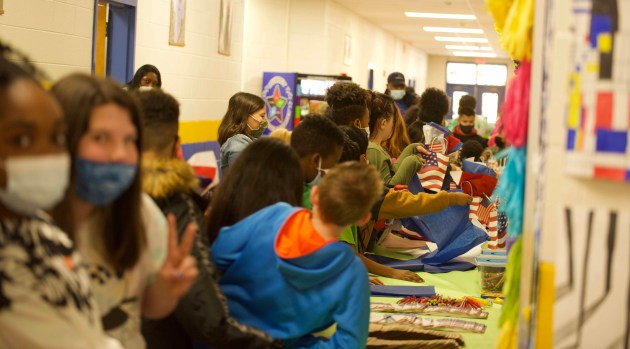 Carl Blankenship/Salisbury Post - The front, main hallway of the school was filled with students building care packages for veterans. 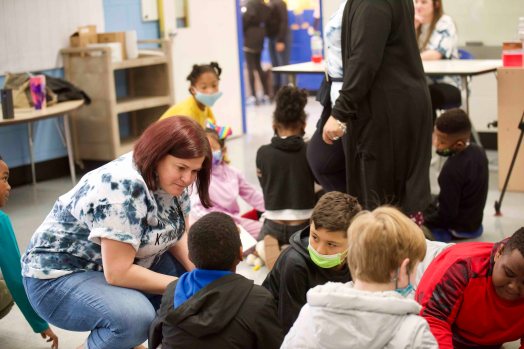 Carl Blankenship/Salisbury Post - Principal Jennifer Brown speaking to students working on care packages. She said she wants to make kindness challenges like this a monthly affair.

Wednesday was Hurley’s first ever kindness day, and the madness at the front and center was kindness from one of the school’s five houses on display.

The school is split into five, color-coordinated houses that have friendly competition with each other. The kids in the front entrance were assembling care packages in green bags, the color of the house “Honoris,” for veterans at the W.G. (Bill) Hefner V.A. Medical Center.

Honoris is Assistant Principal Michael Marsh’s house. He said the house represents the value of honor and its mascot is the lion.

Throughout the school, passersby saw five houses congregating and building care packages for people in the community. They went to veterans, the Rowan County Animal Shelter, teachers in the school system, Novant Rowan Medical Center and nursing home residents.

Fourth grader Jalen McClary, a member of the “Exsecuto” house, made a care package for a teacher at Mt. Ulla. McClary said it was a fun way to spend the morning.

Renny Smith, a fourth grader, built a care package for someone in a nursing home.

Smith is interested in working with people experiencing homeless when she grows up because she wants people to have good lives and not hurt each other.

Adam Nicholson, a fifth grader, put together a care package for the animal shelter. People in his group designed cards for people adopting pets and could add treats for a dog or a cat to add to their packages.

Nicholson made a bag for a dog, saying he prefers dogs that are active and like to play.

Principal Jennifer Brown said the goal was to teach kids the importance of doing good thing for other people. The school’s goal is for students to show all values represented by the houses. Inservio, for example, is the house representing service.

“We wanted kids to do a service project. We really wanted that to be part of the house system,” Brown said.

The teachers worked together on a work day and that turned into the care packages that went out into the community.

The students did not come up with the ideas this time around, but Brown said the school wants to explore having older students get involved in the process in the future.

“I really want this to become a monthly thing,” Brown said, “something that our school does every month, because every Wednesday we spend time in our houses. Sometimes it’s as a whole crew and sometimes it’s small groups like today.”