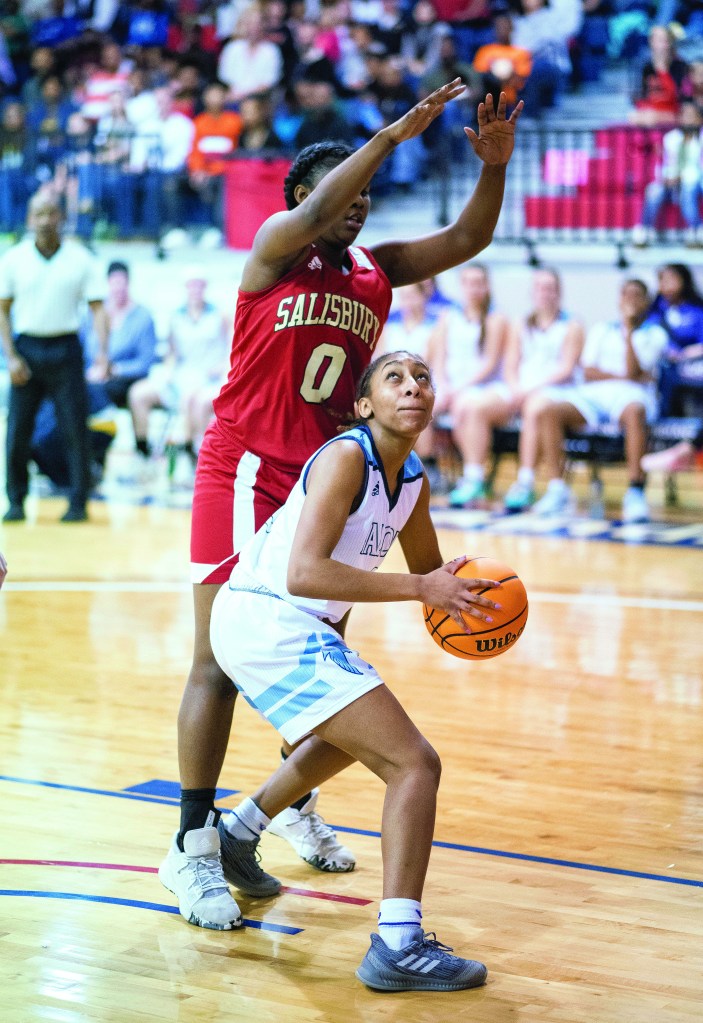 CONCORD — Northwest Cabarrus’ girls basketball team got 30 points from guard Chaunesse Barringer, who might be able to win the Daytona 500, and edged West Rowan 60-58 in a wild South Piedmont Conference semifinal on Wednesday on Coach Bo Court in Concord’s Rimer Gym.

Barringer made decisive free throws with less than one second left on the clock to propel the third-seeded Trojans into Friday’s 6 p.m. championship game against top-seeded Carson.

Second-seeded West trailed by 25 points in the third quarter, but made an improbable rally to get all the way back to 58-all with 14 seconds left.

“The one thing we’re never going to do is stop playing,” West coach Ashley Poole said. “We started to fight back in the third and we played really well in the fourth quarter. I hate it came down to a whistle.”

Lauren Arnold scored 21 and Emma Clarke had 20 for West. Clarke played like a demon in the fourth quarter when she got 13 of her points, but the Falcons never were able to take the lead.

Anxious for revenge, Northwest had more enthusiasm early and took it to the Falcons. West coach Ashley Poole used her first timeout, down 5-0, but the Falcons still couldn’t get going.

It was 12-0 after Barringer’s third early bucket. With 3:26 left in the first quarter, Lauren Arnold made a free throw to put West on the board.

Northwest led 22-7 after that quarter.

Both teams had runs in the second quarter.  West got back within 27-16 when Arnold delivered the ball to Clarke in the post for two more, but The Trojans pushed back ahead 37-19 at halftime, piling up point-blank points on transition buckets and offensive rebounds.

Barringer had 14 points at halftime.

The early portions of the third quarter were brutal for West. Barringer breezed to hoops on a runout and off a turnover to put the Trojans ahead 46-21 with 5:30 left in the third.

Dede Cuthbertson made a free throw and a jumper to chop the deficit to 20.

Arnold’s deadly foul shooting — she made six straight in the quarter — helped West creep closer. When Arnold made a wing 3-pointer for the last points of third quarter — it was the only 3-ball the Falcons sank all night — it was 50-33.

Cuthbertson made a lot of smart passes in the fourth quarter. She and Arnold did a great job of getting the ball to Clarke, a 6-foot sophomore with a soft touch, in scoring position.

Clarke’s three-point play off a Cuthbertson dish was the play that changed the confidence level for West. After Clarke nailed a nice turnaround, it was 50-38 with 6:32 to go, and the Falcons had become the aggressors.

Sarah Durham played a lot, with Makaylah Tenor still out of the lineup. Cuthbertson found Durham loose on an inbounds play underneath to get the Falcons within eight.

Clarke finished again with 3:42 remaining —Cuthbertson made the pass — and the Trojans’ lead was down to 54-48.

Durham’s long two made it 54-50, but the Falcons misfired on their next few possessions.

Arnold made a twisting, off-balance three-point play to lift the Falcons within 56-54 with 1:24 on the clock.

With 1:05 left, Arnold stole the ball and found Clarke for the layup that made it Northwest 57, West 56.

Barringer was going to the rim on every Northwest possession. She made one of two free throws with 59 seconds left for a 58-56 Northwest lead. Northwest retained possession after she missed her second free throw. Then she drove again, was fouled again, and missed again.

Cuthertson confidently shot an open jumper, but missed from mid-range with 32 seconds left.

Barringer didn’t really have a lane to go anywhere, but was fouled by a Falcon well away from the hoop with 0.9 seconds left. It was a collision that didn’t leave the officials much choice.

The Falcons move on to the 3A playoffs and will welcome back Tenor, a tenacious defender and streaky 3-point shooter. They’ll be at full strength for the first time since the Feb. 4 scrap with Central Cabarrus.

West is eighth in the 3A West RPI rankings, with a good record against a good schedule. The Falcons expect to be at home for the first round of the playoffs.

Northwest Cabarrus is a solid 10th in the 3A West rankings and was the only team that beat Carson during the SPC regular season.