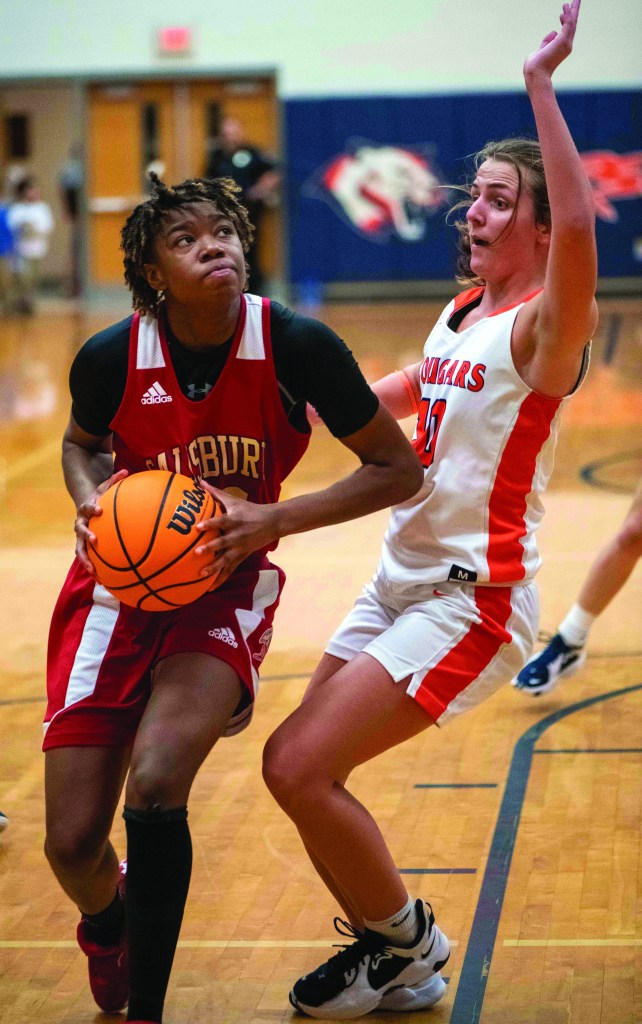 LEXINGTON — Salisbury’s girls basketball team welcomed Jamecia Huntley and MaKayla Noble, two of their taller and more talented players, back to the lineup on Wednesday.

Energized by returning to full strength and once again able to deploy two destructive platoons, the Hornets demolished West Davidson 74-3 in a Central Carolina Conference semifinal.

Top-seeded Salisbury set a school record for fewest points allowed in a game. The Hornets broke the short-lived record they set last week when they wiped out Thomasville 74-5 despite being shorthanded.

Salisbury will play for the tournament championship on Friday at 6 p.m., returning to Lexington to take on either third-seeded Lexington or second-seeded North Rowan. Those two teams battle Thursday.

The Hornets (21-1) won their 20th in a row. They enjoyed a 53-0 run while shutting out the Green Dragons in the middle two quarters.

Kyla Bryant got the first four points as the Hornets moved out to a 10-0 lead over the fifth-seeded Green Dragons (8-16).

West Davidson scored with 5:27 left in the first quarter to make it 12-2. Kaitlyn Phillippie used a screen to shake loose from Rachel McCullough, had an open look and drilled a nice shot from the left corner. No one had any clue at the time that West Davidson wouldn’t make another field goal. Phillippie would lead her team with two points.

Icesis Nwafor made a 3-pointer for 15-2. McCullough struck from long range for 24-2.

The lead swelled. Huntley had terrific energy and is one of the county’s most gifted players when she’s 100 percent. She piled up steals and assists, as the Hornets went up 45-2 against their bewildered opponents.

Kiki Walker got the last five points of the half in a span of two seconds to make it 50-2 at halftime.

Huntley was responsible for Salisbury’s first eight points of the third quarter, either scoring or assisting.

With 5:20 left in the game, Allie Brown made a free throw for West Davidson to end a scoring drought of almost 21 minutes. That made it 63-3.

Unofficially, Huntley had 12 points, eight steals and six assists while playing about two-thirds of a running-clock game.

Bryant scored 21, topping 20 for the fifth straight game. McCullough made only one 3-pointer, but stuffed the stat sheet with steals and assists and scored 11.

In a competitive game played with normal clock stoppages, she’s capable of a triple-double. Maybe even a quadruple-double, as she Salisbury’s most active and athletic rebounder when she’s healthy.

Salisbury is No. 2 in the 2A West RPI rankings. Randleman is still No. 1.

West Davidson won’t make the playoffs, but the Green Dragons are ahead of a dozen 2A West teams in RPI.