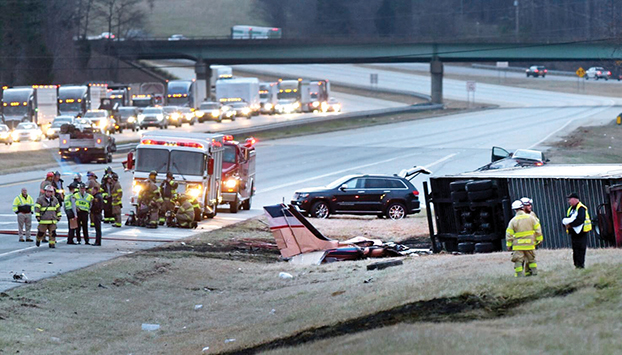 A Beechcraft twin-engine Baron crashed into a tractor trailer on I-85 at the exit with N.C. 47 (Exit 88), near the end of the runway at Davidson County Airport in Lexington, Wednesday, Feb. 16, 2022. (Walt Unks/Winston-Salem Journal)

LEXINGTON — An airplane crashed into a tractor-trailer on Wednesday on Interstate 85, sparking a small fire and killing the pilot.

The Federal Aviation Administration said a twin-engine Beechcraft Barron crashed into the tractor-trailer on Interstate 85 South, near the Davidson County Airport in Lexington at around 5:35 p.m. The Lexington Dispatch reported the pilot was killed in the crash. The driver of the truck sustained minor injuries.

The FAA said it would investigate the crash along with the National Transportation Safety Board, but provided no additional details. The Lexington Dispatch reported the small plane crashed after taking off from the airport.

Video footage from the scene showed both the tractor and trailer on its left side. The tail section of the aircraft was seen next to the overturned rig. Video also showed firefighters spraying water as flames burned the ground next to I-85 with some debris scattered on the road.