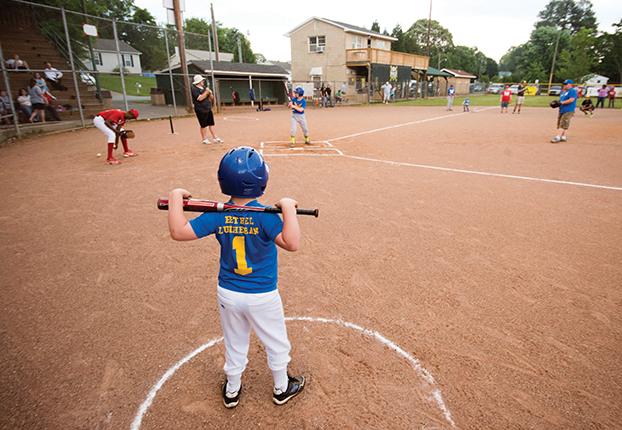 JON C. LAKEY / SALISBURY POST FILE PHOTO - Sam Cheek relaxes as he waits on his turn at bat. Spencer Cal Ripken League includes two teams in the Bubby Ball division. The Cal Ripken teams take turns in assisting the buddy ball participants play their games. The North Rowan High school varsity baseball team has been coming too to help out with the games. Thursday, May 12, 2016, in Spencer, N.C.

Earlier this month, work started on the first phase of a laundry list of renovations that will keep the park safe and up to standards. Local Cal Ripken baseball plays at the field. So does Buddy Ball, a league for kids with disabilities.

“A lot more goes on there than people probably realize,” said Rusty Miller, an insurance agent and a member of the group Friends of Eighth Street Ballpark.

Work started with pressure washing the entire facility so it can be repainted. Other goals in the first phase are new roofing, rebuilding the batting cages and bullpens, disability-accessible seats, foul poles, new doors and windows, more fencing, gates around the facility and a new scoreboard.

The goal is also to convert the dirt infield to grass and install irrigation.

Friends of Eighth Street Ballpark, a nonprofit dedicated to maintaining the park, has raised more than $12,000 and is aiming for $53,000 to cover all of the first phase projects.

Miller said the more expensive part of refitting the park will be the two capital projects that make up the second phase: upgrading the field lights and adding a paved parking lot. Those two projects have an estimated cost of $150,000.

“Our immediate concern is the repair and upgrades at the ballpark to make it safe,” Miller said.

To raise money, the nonprofit hosted raffles and a chicken dinner fundraiser. He said the nonprofit is doing its best to keep raising money in house, but it wants the community to know the park needs work and help raising money, particularly because of increased material costs.

“I’m including the grandstand similar to the one we just lost at Newman Park and that we lost about seven years ago over at Granite,” Miller said. “We don’t want to have the same thing happen to ours.”

In the most recent example at Newman Park, Catawba College tore down the old grandstand for its overhaul of the field because the structure wasn’t unsound. Miller said the grandstand in Spencer is still in good shape because, appropriate for the history of the town, it was built with exceptionally sturdy railway pipe. It will be renovated rather than replaced.

“Structurally we’re in pretty good shape right now, and we want to make sure it stays that way,” Miller said.

Miller said the nonprofit sees the ballpark as a historical asset it is trying to preserve. People all over the county have played ball in Spencer, he said.

The project has gotten attention from people who used to live in Rowan County, too. One of those people is Chip Baker, who spent 20 years of his 40-year career in baseball as Florida State University’s director of baseball operations. Prior to his current job, he spent 18 years as an assistant coach at the university.

Baker said he was happy to donate to the renovations at the ballpark, where he first experienced organized baseball. Baker grew up three blocks away.

Skating rink, more stalls on the list of plans for this year’s Winterfest in Spencer