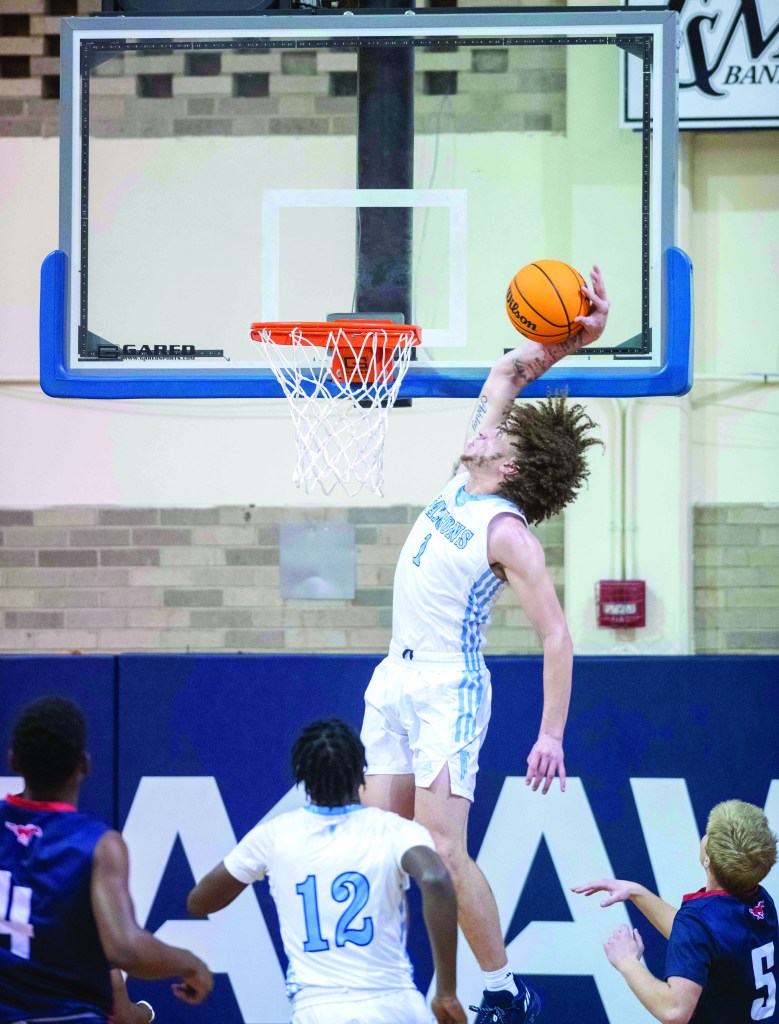 HUNTERSVILLE — Will Givens made a clutch jumper with 4.5 seconds left to lift West Rowan to a 58-56 win at Lake Norman Charter on Monday in the first round of the South Piedmont Conference Tournament.

Under unusual circumstances, the fourth-seeded Falcons (11-9) were on the road against the fifth-seeded Knights.

Lake Norman Charter had an opportunity for a final shot, but West’s Kayvone Norman forced a turnover.

Athan Gill scored 17 to lead the Falcons before fouling out with about a minute left.

West plays top-seeded and unbeaten Central Cabarrus tonight at Concord in a semifinal at 7:30 p.m.

The fifth-seeded Raiders (10-13) stayed in the game for three quarters, but the fourth-seeded Knights took charge in the final one.

“We played hard and well for three quarters, but didn’t finish strong enough,” South coach Alex Allen said. “Hopefully, we’ll be in the playoffs. These girls have improved so much.”

South could make the playoffs, but the Raiders are on the edge in the 32-team 3A West bracket. They’ll find out Saturday when pairings are released.

Mackenzie Chabala led South with a career-high 21 points. The junior surpassed 500 for her career.

KANNAPOLIS — Carson’s boys struggled for the third time this season to solve Northwest Cabarrus’ defense and lost 53-40 in a first-round SPC game.

It’s expected to be a season-ender for the sixth-seeded Cougars (6-19), who finished the season playing their best ball and beat East Rowan in a tourney play-in game on Saturday.

Trent Grigley had 15 for the third-seeded Trojans.

Northwest will take on tournament host Concord, the No. 2 seed, on Wednesday at 7:30 p.m.

SPENCER — North Rowan’s girls got 21 points from Hannah Wilkerson and 20 from Bailee Goodlett and routed Thomasville 61-12 in a first round game in the Central Carolina Conference Tournament.

Wilkerson, who reached 1,500 career points, and Goodlett had five steals each, as the Cavaliers ended the seventh-seeded Bulldogs’ season.

North advanced to a Thursday semifinal against third-seeded Lexington. That will be played at 6 p.m. on the Yellow Jackets’ home floor. Lexington romped 72-30 against East Davidson on Monday.

SPENCER — North Rowan’s third-seeded boys got scoring from 13 players and won 77-51 against sixth-seeded South Davidson in a CCC first-round game.

The Wildcats stayed with the Cavaliers for a half, but North broke it open with a 31-point third quarter.

North will tangle with second-seeded Thomasville in a Thursday semifinal. That game will be played at Lexington at 7:30 p.m.