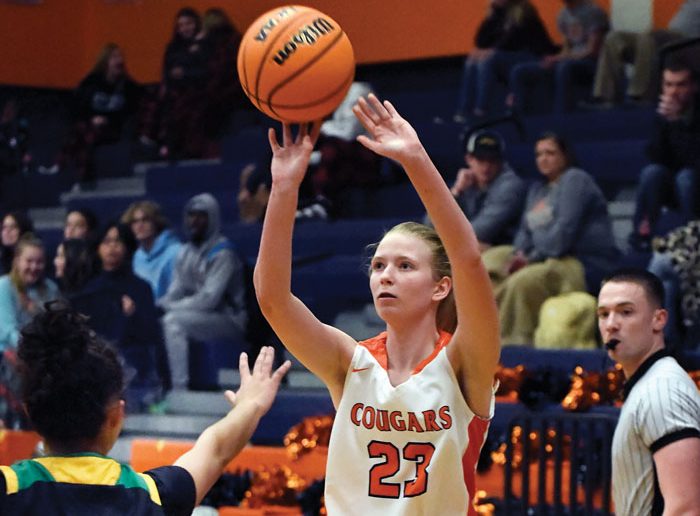 CONCORD — Carson’s girls struggled through the second half, but beat Lake Norman Charter 54-42 on Tuesday in a South Piedmont Conference semifinal.

“We didn’t have a very good game except for the second quarter, and we didn’t play well at all in the second half,” Carson head coach Brooke Stouder said. “Lake Norman Charter did a good job of making us uncomfortable in the second half. Still, we did win. There’s something to be said for finding a way to win when you’re not at your best.”

“They’re a good team,” Stouder said. “It’s not easy to beat the good ones three times.”

Carson won its 12th game in a row.

Hannah Isley had a huge night for Carson with 25 points, one short of her career high. She’s frequently led the scoring for the Cougars down the stretch, as teams have given a lot of attention to containing Mary Spry.

“Hannah did a great job running the floor every time and shot it with confidence,” Stouder said. “She did a good job of scoring on the baseline and she made three 3-pointers.”

Isley came in averaging 13.5 points per game and had 16 before halftime. She pushed the Cougars to a 33-17 lead at the break.

Makayla Johnson scored 12 for the Cougars and has been in double figures in six of Carson’s last 10 games.

“She did a good job of catching the ball at the high post and making a controlled move,” Stouder said.

Spry was held to 10 points but had 15 rebounds. Isley had eight rebounds. Aliayah White pulled down seven.

Marissa Sorvillo scored 18 for the Knights. Jade Taylor had 12.

Carson advanced to the tournament championship game on Friday at 6 p.m. The Cougars will play the winner of tonight’s West Rowan-Northwest Cabarrus game.

Lake Norman Charter will be in the 3A playoffs.  Carson still projects as the No. 1 in the 3A West.