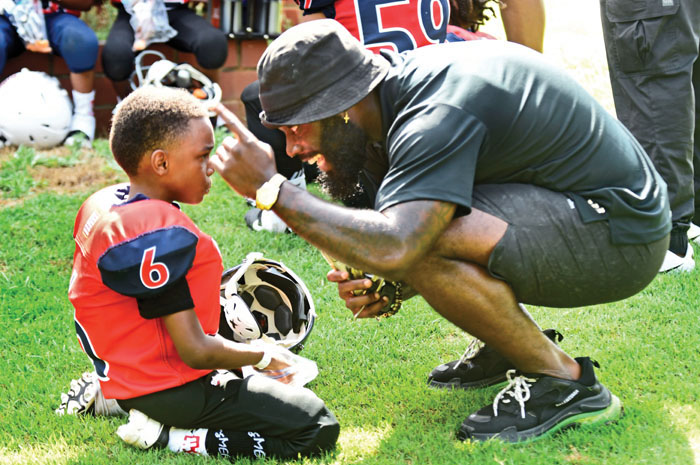 KP Parks gives pointers to Tylan Wiggins during halftime of a Carolina Defenders game last year in Cleveland. photo by Wayne Hinshaw, for the Salisbury Post

That would have been a defensive coordinator’s nightmare.

West Rowan High graduate Parks, who was Associated Press Football Player of the Year for North Carolina in 2009, and Salisbury High alum Morris, who was NCHSAA Male Athlete of the Year for 2010-11, announced Sunday they are joining forces and combining the youth athletic development programs they lead.

Parks has guided football operations for the Cleveland-based Defenders Sports Academy since 2018.

Both organizations have put together successful youth football teams that have represented Rowan County at the state and regional levels. The Defenders 6U team competed in the AAU Nationals in Florida in December.

Future teams will be known as the Next Generation Defenders.

Next Generation Defenders will involve a lot more than football. There’s basketball, baseball, softball and cheerleading.

There’s also tutoring and a focus on academics. Parks, Morris and Knox have seen too many outstanding high school athletes not get a chance at a college education because they didn’t handle the classroom side of the equation.

“Football ends one day for all of us,” Knox said. “So your mindset has to be, what comes next after football? Sure, we want to train 5-star athletes, but we also want to produce outstanding students, outstanding people.”

While all three are remembered mostly for their gridiron deeds, they were multi-sport athletes in high school.

Parks broke every conceivable rushing record on the football field, but he also excelled in basketball. Knox was a three-sport star, who stood out in basketball and baseball. Morris was a lockdown defender in basketball and was regarded as the fastest man in the state as a track and field sprinter. He won state titles indoors and outdoors.

All three are experienced coaches and trainers, with knowledge beyond X’s and O’s. They have expertise with speed and agility training and proper weight training.

They’re positive role models who would like to see Rowan County football get back to where it once was. There was a December day in 2010 when Salisbury and West Rowan won state championships on the same afternoon. They’d like to recreate that sort of atmosphere.

“We’ve got a lot of experience and knowledge that we can share with young people,” Morris said. “We’d all like for things to be the way they used to be. We’ve been there, we know what it takes to get there, and we’re all willing to make some sacrifices to do some good for Rowan County.”

Next Generation Defenders teams start early. They’re for ages 5 to 12.

Most operations will be conducted at Salisbury’s Hall Gym.

There will be a meeting to start putting coaching staffs together on Feb. 27.

Football workouts are scheduled to begin behind Hall Gym on March 5.

“This isn’t about Salisbury or West,” Knox said. “This is about making things better for all of Rowan County as a whole.”