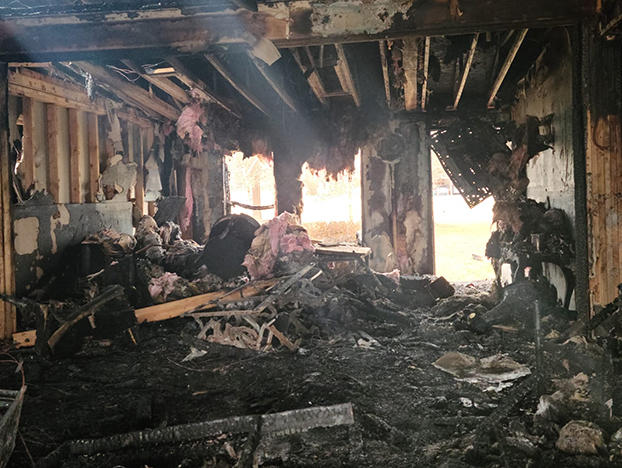 This photo shared by Anthony Sharum shows the inside of his home that was destroyed by a fire over the weekend.

The fire occurred in two parts and fully engulfed the home Saturday afternoon, Union Fire Chief Jason Cauble said. The firefighting effort lasted for four hours and involved 12,000 gallons of water hauled from a nearby pond, but the blaze was too intense to prevent it from destroying the house.

Sharum said the fire was caused by a gas fireplace on inside the house as he was working in the yard. Ammunition and propane tanks exploded during the fire, making it sound like a war zone, he said. Sharum and his wife left briefly to eat lunch after it looked like the fire was out, but the home was fully engulfed when they returned.

He said damage caused by the fire is no one’s fault and suspects a still-burning ember caused the later flare-up. A brisk wind contributed to the rapid spread of the fire, he said. There was no one injured in the fire.

Material things can be replaced, Sharum said. He was grateful Monday for an outpouring of support — material and otherwise — from friends, family and acquaintances. One friend is loaning him a camper to stay in. People he arrested during his career also have offered to help.

“Through my years of service, I’ve made many contacts and many friends, and it seems apparent to me that I must have done something right,” he said.

Sharum is best known for his career as an N.C. Wildlife Resources Commission officer in Rowan County. He wrote regular outdoors columns in the Salisbury Post prior to his retirement and received the 2012 Governor’s Award for Excellence for Outstanding Service.

“He has contributed significantly to promoting the public image of the N.C. Wildlife Resources Commission and of state employees as a whole,” a 2012 news release said about Sharum.

Last month, Sharum used his fish-finding radar to help rescue crews find a car that was knocked into the Yadkin River near U.S. 29. The fire didn’t damage his fishing gear, which he plans to put to use as soon as gets through some of the immediate post-fire tasks.

“When you’re standing there watching it unfold in front of you, it gives you a different aspect about what’s important in life,” he said.

In a widely shared Facebook post on Sunday, Sharum said, “Of course it’s an interesting thought when you suddenly realize that you own one pair of underwear.”

He’s now the owner of six pairs of underwear and says his mother will rest better knowing that.

Sharum’s daughter has set up an online fundraiser to help with expenses at spot.fund/u3XetO.