Ask Us: Why don’t cardinal directions, Salisbury streets line up? 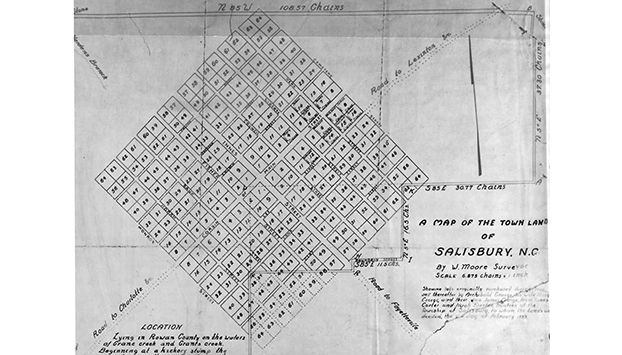 A September 1925 map of Salisbury.

Besides the fact that Northeast Main Street or Northwest Innes Street don’t roll off the tongue as easily, there’s a reason for the off-axis directions.

Retired Catawba College history professor Gary Freeze said Salisbury’s original streets were laid out in a diamond shape in the 1700s by a group sent to design the town. The group included James Carter, John Brevard, Edward Hughes and Squire Boone. The square turned on its side pointed due north at its northern tip and due south at its original southern tip, but the streets within the city did not.

Was it a common surveying tendency? Was it oriented to a road earlier travelers used? Did it have a link to the freemasons? Is there a connection to the city of Washington, D.C., which had the same tilt before its southern portion was given back to Virginia?

Freeze isn’t certain, but the square turned on its side remains a “peculiar” quirk of Salisbury’s layout.

Another quirk of Salisbury’s design: someone who stands in the middle of the Square in downtown Salisbury and looks down East Innes Street can see Dunns Mountain on a clear day.

Cardinal directions were attached to Salisbury’s streets some time in the mid-1900s, Freeze said. Main Street also previously was Corbin Street — named for Colonial surveyors – for its entire span through Salisbury.