‘A full circle’: How Rowan Countians came together to craft a truly local brew 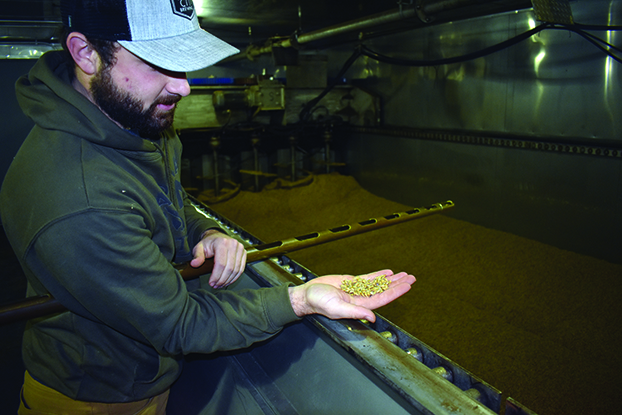 Mark van Wagenberg holds a handful of germinating grains. His golden malt probe is resting in his other hand. Variations in the germinating and kilning process help give the malted barley its different flavors. Ben Stansell/Salisbury Post

When Ray Horton planted the first crop of barley on his western Rowan County farm in fall 2016, he was taking a leap of faith.

And he wasn’t jumping alone.

Horton was one of several local farmers planting barley in anticipation of Carolina Malt House beginning its operations the following spring. The idea was for farmers to have the barley ready to harvest in May, at which point the startup Carolina Malt House would turn it into malt to sell to craft breweries for beer production. Malted barley is one of the key ingredients in beer, giving the beverage flavor, color and the sugars needed in the brewing process.

At the time Horton planted the barley seeds, the Carolina Malt House was only an idea in the mind of Aaron Goss, a lawyer who fell in love with the beer-making process through home brewing.

“When we planted the first barley crop, they were just starting the grading process on site,” Horton said. “Nothing was there. It took a mutual leap of faith for everybody involved.”

Four years later, Horton is glad that he decided to risk it.

Carolina Malt House has become one of the largest malting operations in the Southeast, sending about 300,000 pounds of malted barley and wheat per month to over 100 breweries throughout the Carolinas, Virginia and Tennessee.

“It’s pretty amazing to see the success that’s happened out of Aaron’s crystal ball that he looked into years ago,” Horton said.

What’s even more impressive is that all of the barley and wheat in Carolina Malt House’s main product lines is grown in Rowan County, most of it in a 10-mile radius of the malt house’s facility on Statesville Boulevard in Cleveland.

“We are the only malting operation (in the Southeast) to use 100% locally grown grain,” Goss said.

While a majority of the grain used by Carolina Malt House is sent to breweries in cities like Asheville or Charlotte, some of it never gets past the Rowan County lines. A portion of the malt is delivered directly to local breweries such as New Sarum, where it is transformed into beer. The spent barley, leached of its natural sugars in the brew process, is given back to Rowan County farmers who use it for animal feed.

The full barley-to-beer circle wouldn’t be possible if each link in the chain hadn’t committed years ago to the idea that local is better. 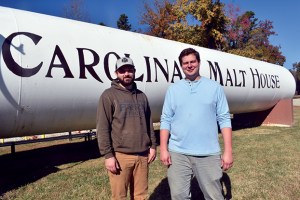 Terroir, which sounds like “tare-WAHr,” is a French term used by wine lovers to describe the way a certain region’s climate, soil, tradition and terrain impact the way a vintage tastes.

Goss, who is more into suds than he is chardonnay, believes the same is true for beer.

“Coors Brewing company actually did a study where they show the terroir of the barley matters,” Goss said. “Thankfully, in this area we have really good terroir for beer.”

Goss’ belief the best beer is made with local ingredients led him to launch Carolina Malt House. Although Goss was an experienced home brewer, he dove deep into the malt-making process. Goss read any book he found about malt making and went on trips to tour malt facilities across the U.S. Relying on his German language education, he even deciphered old Germanic academic articles on the topic.

Once he studied the malting process, Goss put together plans for a facility. With no professional engineering training, Goss designed most of the malting equipment now used at Carolina Malt House, in only a month’s time.

“The steel doesn’t work any differently for me just because there’s no ‘PE’ after my name,” Goss said.

The malting process itself can be broken down into a few main steps. The first is receiving and grading the barley brought to the Carolina Malt House by farmers, which takes place in just “a busy few weeks” at the end of May. Carolina Malt House works with about 14 Rowan County farmers, including Horton, who produce a few different varieties of barley.

After the barley is weighed and graded, it’s stored in grain elevators behind the malt house’s production facility. When it’s ready to be malted, the barley is cleaned and soaked in a steep tank. Once it’s sufficiently wet, the barley is left to germinate in a 22-ton pneumatic germination and kilning vessel under the watchful eye of Head Malter Mark van Wagenberg.

Once it’s at the right stage of germination, the malt is kilned and transferred to a “deculmer,” which removes the rootlets growing on each grain. It’s then packaged in a brown Carolina Malt House bag and shipped off to a brewery.

“Your typical malt used in a brewery will have traveled about 3,000 miles versus our average being less than 100 miles,” Goss said. 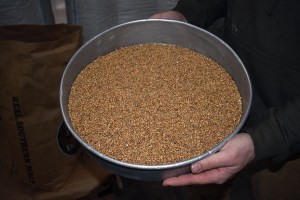 While most breweries receive their Carolina Malt House shipments on a truck, New Sarum head brewmaster Andy Maben picks his load up in person. After all, it’s only a 26-minute drive from the North Lee Street brewery to Carolina Malt House. Plus, it allows Maben to visit the company he’s been a customer of since day one.

“The minute they were able to make malt, we started working with them,” Maben said.

Maben and Goss knew each other before Carolina Malt House launched, which is one reason why Maben was first in line for Goss’ product.

Another reason is Carolina Malt House gives New Sarum a local malt supplier, which isn’t easy to find. There are only a handful of malt houses in the entire state of North Carolina.

“Our guys go out there, we talk about the state of the industry with them and we’re able to have some tangible connection to that part of the industry, which is somewhat segregated,” Maben said. “More often than not, you see that driver from UPS or FedEx dropping off this stuff. For us, we’re able to physically go and pick it up.”

Having a nearby malt supplier has been especially paramount during the COVID-19 pandemic as malt, like many products, has become more difficult to source. Grain for brewing has increased in cost too, but thanks to its local supply chain, Carolina Malt House has been able to keep its prices down.

“The malt industry has announced 15-18% price hikes and we are relatively unaffected by all of that freight stuff because of our hyperlocal supply chain,” Goss said. “You can go drive to our farms. Fuel costs could go up 10 times and it won’t affect us all that much because we don’t use that fuel compared to our competitors.”

Carolina Malt House’s quality, too, has continued to be superb. In its first year in business, Carolina Malt House took home third place in the Craft Brewers Guild Malt Cup. Even as the business has grown, its emphasis on good ingredients and malting process has remained sharp. That’s good news for brewers like Maben.

“There’s just four ingredients and that’s one of them, so 25% of whatever you’re doing is malt,” Maben said. “It’s a huge factor. Quality malt directly affects profitability as well. If it’s able to convert properly and your efficiency is higher, your profit margin is higher because you have to use less.” 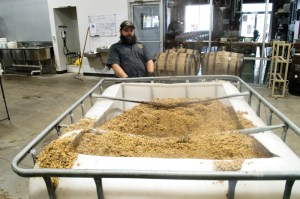 Josh Bergeron / Salisbury Post – News Sarum Brewmaster Andy Maben pulls a cart full of spent grain out of the brewery. New Sarum donates its used gran to farmers, who then feed it to livestock.

When the brewery is finished leaching the sugars from the grain, it doesn’t just dispose of what’s left. Maben has built relationships with several local farmers who pick up the spent malt and take it home to their livestock.

Rowan County Commissioner Jim Greene, who raises cattle on his farm, visits New Sarum a couple times each month to pick up the used grain. Greene said his cattle are always happy to see him when he returns with a truckload.

For Maben, giving the grain to farmers is not only a good way to get rid of a brewing byproduct. It’s also a sustainable practice.

“Throwing it away seems like a waste,” Maben said. “Let’s try to repurpose this stuff. It’s like recycling.”

Sustainability is a constant theme in the barley-to-beer circle of life. Horton grows his barley in fields that haven’t been tilled in decades, which maintains good soil health and prevents erosion and runoff.

“We’re very conscious of being sustainable to preserve this soil for the next generations,” Horton said.

When Carolina Malt House removes the rootlets from barley grains, they are given to local farmers and also used as feed.

The sustainable nature of how the malt is produced is another reason for consumers to feel good about drinking a New Sarum beer. The consumer is, after all, the most important piece of the puzzle.

“We make a niche product,” Maben said. “I’m expecting you to want to use your hard-earned dollars to buy my product instead of the one that costs a little bit less.”

Even if a Yadkin River Lager might cost a few bucks more than your typical light beer, the drinker can take solace in the fact that they’re supporting farmers and entrepreneurs solely in Rowan County.