Return of the Mack: Back on track with help from RCCC’s Better Jobs for Better Lives 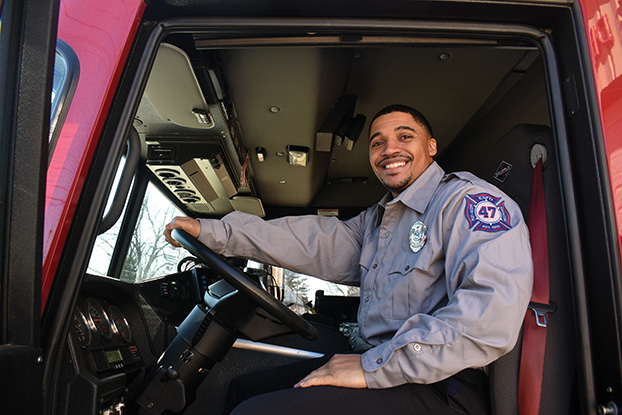 Becoming a firefighter once seemed like an unattainable dream for Anthony Mack, but the East Spencer native is now working at his hometown station after graduating from Rowan-Cabarrus Community College's fire academy. Ben Stansell/Salisbury Post

EAST SPENCER — After timidly approaching the microphone, Anthony Mack began to tell his story to the Rowan County Board of Commissioners.

Mack started his tale by setting the scene: he was a man in his mid-30s going through a midlife crisis. The statement sent laughter bouncing off the walls of the room, much of it coming from commissioners at least a few decades his senior.

Mack smiled, but it was clear he hadn’t exactly meant it as a joke.

“A lot can happen in 35 years,” Mack said during an interview with the Post last week.

Mack’s story is one of a man who was rudderless, looking for direction after bouncing from job to job and couch to shelter. It’s the story of a man who found a new path forward in an old place.

Although Mack’s journey is not over, it already has a storybook ending.

With the help of Rowan-Cabarrus Community College’s Better Jobs for Better Lives program, Mack earned several certifications and will soon join the East Spencer Volunteer Fire Department as a part-time firefighter while fielding other employment opportunities. Better Jobs for Better Lives provides short-term job training to Rowan Countians. Scholarships for the program are funded by the Rowan County Board of Commissioners, which is why RCCC brought Mack to talk to the board earlier this month.

Mack’s career trajectory, which had long been flatlining, started to point in the right direction when he met a passionate RCCC recruiter in May 2020 at a park in his hometown of East Spencer.

Mack moved back to East Spencer in 2018. He was born in Rowan County and spent the summers of his youth in the town, but completed his schooling in Maryland. After graduating from high school, Mack stayed in Maryland and attempted to turn his talent for basketball into a college scholarship. When that didn’t pan out, he started taking classes at a community college.

Mack will be the first to tell you he wasn’t a stellar student. His GPA was not a point of pride and he struggled to concentrate on his studies. Mack eventually stopped taking classes, coming short of earning a degree. He started a family and moved to New York, where he worked a number of assorted jobs.

“I worked at warehouses, convenience stores,” Mack said. “I worked in landscaping and lawn care. I worked some construction. I worked any job I could get my hands on.”

A falling out with his wife left Mack spiraling and he eventually lost the right to see his son, Anthony Lamar Mack Jr. In search of a more lucrative career that would help get him on the right track, Mack started studying for his class A commercial driver’s license, or CDL, which would allow him to haul cargo on an 18 wheeler.

He moved to Iowa and enrolled in a program that would help him earn the certification, but the program he’d signed up for was not what he’d hoped. He didn’t last very long in the program and was soon bouncing from job to job. Without a steady stream of income, he spent time living in shelters or on friends’ couches.

“I was so determined to call myself a man and take care of myself and not ask anybody for help,” Mack said.

Mack returned to Rowan County in 2018 for his sister’s wedding. She convinced him to stick around past the nuptials. Even though Mack had a family support system in East Spencer, he still struggled to find his purpose — his “midlife crisis.”

“I don’t think I even had a mentality at that point. I was living with family, trying to take it one day at a time,” Mack said.

Corum, a student success navigator and continuing education recruiter for RCCC, was there to spread the word about the college’s programs.

“It’s always been in my heart to pull the community of East Spencer and show them we are here for all of Rowan County, not just those who are conveniently located next door,” Corum said.

She approached Mack and asked him if he was a student at the college. When he said he wasn’t, Mack scheduled a time for him to meet her at the North Carolina Works Career Center at 1904 S. Main St.

“I didn’t know she would change my life,” Mack said.

Their first meeting almost went awry after Corum told Mack that the upcoming class A CDL course was already full. When Mack started for the door, Corum wouldn’t let him leave.

“He got ready to get up and leave, and Mr. Mack at that time had shared with me how he was experiencing a lot of depression, self doubt, and a lot of people who told him he could not and would not,” Corum said. “I could see there was a desire for more. So, I talked him into staying.”

She helped Mack enroll in an upcoming class B CDL course, which would give him a certificate to drive most trucks but not an 18-wheeler. Mack earned his certification just a few weeks before the pandemic shut down the United States. He was poised to take a job operating a truck for a local company, but had a change of heart.

He told Corum about his dream. She helped him enroll in RCCC’s fire and rescue training program with sponsorship from the East Spencer Volunteer Fire Department. As he worked his way through the program, he also started volunteering at the department under Chief Shawn McBride. Simultaneously, Mack enrolled in RCCC’s emergency medical technician program.

“I had to hurry up and leave the building because I was getting a little too excited and loud for all the other test takers,” Mack said. “I stood up and clapped my hand one time and said, ‘Thank you, Jesus.’ ”

With multiple certifications to his name and several job prospects on the horizon, Mack said he is appreciative of the support he received from Corum and the rest of RCCC’s staff. 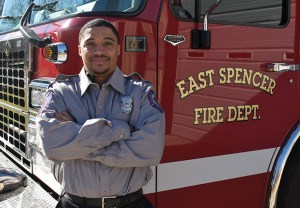 Anthony Mack is proud to be where he is today, but said credit should go to the team at Rowan-Cabarrus Community College who helped him enroll in fire academy and encouraged him to get his class B CDL and EMT certification. Ben Stansell/Salisbury Post

“They helped me do things I didn’t think I could do,” Mack said. “They were telling me I was going to pass when I was telling myself deep down inside I was going to fail. When I was feeling discouraged, they encouraged me.”

He’s also thankful for the support of his sister, Tiffany Mack Smith, his mother, Sharon Mack, and the many other family members and friends who have helped him.

Corum said she is proud to see how different Mack is today from the man she met at the park, the one who lacked self confidence and a clear route forward.

“This is a man with pride, who knows where he’s going and what he’s doing,” Corum said. “Watching that transformation has been inspiring.”

Mack said he is ready to prove his worth as an employee and to make his son proud.

More information about the Better Jobs for Better Lives program or RCCC’s other continuing education services can be found online at www.rccc.edu or by visiting the college in person at 1333 Jake Alexander Blvd. S.

Corum said her desk is by the door and she’s always ready to help someone looking for a new direction.