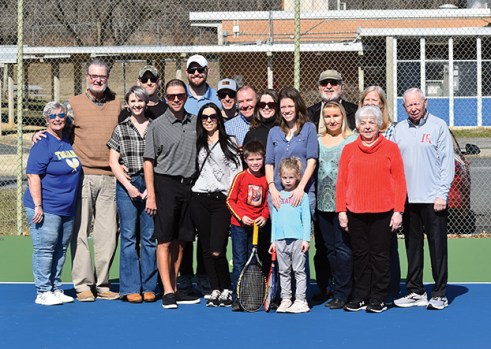 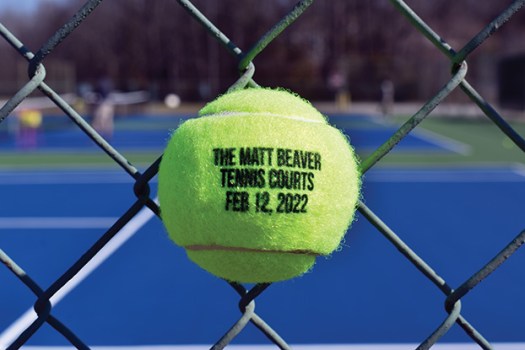 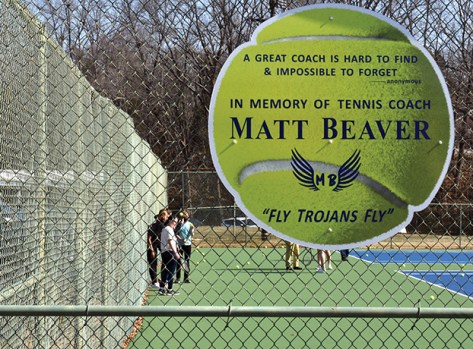 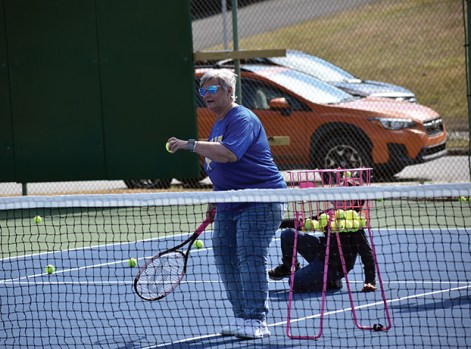 Marsha Beaver, who taught Matt how to play tennis and coached alongside him at Knox, hits tennis balls to former players. Marsha and Matt shared plenty of happy moments on the courts and always dreamed of having them renovated. Ben Stansell/Salisbury Post 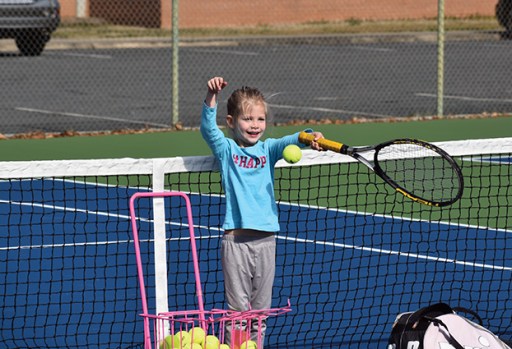 SALISBURY — Matt Beaver always did his best to keep the Knox Middle School tennis courts in good shape, but time and weather are a tough opponent to beat.

After years of wear and tear, the courts needed more than a minor makeover. They needed a full renovation. Cracks started to form, weeds grew between cracked concrete. A fence hit by a car was falling apart.

Matt would have been delighted to see the courts on Saturday morning: bright green and blue under the shining sun — neither cracks nor weeds in sight.

“Boy, would he be proud and impressed right now,” said Jamie Phillips, a fellow physical education teacher and friend.

Matt Beaver, 40, died a little over a year ago after contracting COVID-19. Family, friends, colleagues and former players gathered in full force at the Knox Middle School courts on Saturday morning to honor the beloved coach and teacher by dedicating the courts in his name.

“This day is full of mixed emotions for us,” said Dale Beaver, Matt’s father. “While we’re extremely grateful for this project, for all the thoughts and prayers and finances, all the love that’s gone into it, at the same time we still miss Matt everyday. To miss Matt is to love Matt and those of you that know him understand that. Matt was an easy person to love.”

The idea to honor Matt by fixing up the old courts came from Marsha Beaver, Matt’s stepmom. Marsha taught Matt how to play tennis when he was about 13 years old. Matt played during his high school career at East Rowan, but he competed in basketball while attending Piedmont Bible College. Matt also went to High Point University, where he earned a degree in health and physical education.

Matt picked up his racket again after college and started coaching the sport at Knox Middle School in 2010. He asked for help from Marsha, who was more than content to spend her afternoons on the court hitting balls to the team’s players. She was just as happy to be spending time with her stepson.

“From the time that we met, we bonded well. But tennis brought us even closer,” Marsha said. “It was a special time to be able to do something both of us loved together that really sealed the relationship between us.”

They both taught technique, but Marsha was the instructor and Matt the motivator. He coached the way he lived, with an easygoing attitude and kindness.

“He knew the game and took coaching very seriously,” Marsha said. “But he knew how to have fun with it and have fun with the kids yet still maintain the respect that’s needed between players and a coach.”

Even against the team’s toughest foes, Matt kept it cool.

“We were over here at one of the matches and I think we were playing Mooresville,” Knox Middle School Principal Michael Courtwright said. “Sometimes it gets a little heated. I got a little loud and Coach Beaver just smiled.”

Christopher Derrick, who played for Matt in 2010, will never forget that smile.

“That man smiled more than anybody I know,” Derrick said. “It didn’t matter if you had just won 8-0 or lost 0-8, you were met with a smiling face when you came off that court. I know right now he’s looking down on us, smiling.”

Together, Matt and Marsha helped boys and girls become winners. In 2013, the boys team claimed a conference championship. A few years later, the girls team went on a dominant run and finished the year a perfect 16-0.

It wasn’t just about winning to Matt. Making students feel included and important was the main mission.

“I have no doubt that (Matt’s) greatest desire would be for these courts to be used to encourage young people to do their best to become the best person they can be,” Dale said. “He would want each and every child to see themselves as a special person, with God-given talent and ability. Finally, he would want each person to step on this court to know they were special and loved.”

Three tennis courts can only hold so many players, but Matt made it clear that he wouldn’t turn an interested athlete away.

“He told me, it doesn’t matter if 100 kids come out for tennis, all 100 kids will make this team, all 100 kids will play at some point in time,” said Derek Butler, Knox Middle School’s athletic director. “That’s just the kind of man he was.”

Almost a dozen of Matt’s former players were at the courts on Saturday, some of them traveling back from college at Appalachian State or the University of North Carolina.

Despite the success of the school’s tennis program, resurfacing and improving the courts always seemed like a lofty goal. That didn’t stop Marsha and Matt from dreaming. In the summer, Marsha approached Krista Woolly, whose children played tennis for Matt at Knox, with the idea of finally making it happen as a way to honor his memory. Marsha thought grants were the way to go. Marsha told her she knew a better way.

“I said, ‘We could write grants, Marsha, or we could ask all the people who have had anything to do with Knox Middle School to donate and my guess is we could raise the money quicker that way,’” Woolly said.

Woolly was right. About half of the people who received letters about the project decided to donate. The committee collected $21,425 from 38 donors. The money for the project was raised by the committee of Krista Woolly, Kathy Rusher, Mary Heather Steinman, Jason Walser and Frank Eason.

“It was just amazing,” Woolly said. “I kind of felt like it was going to happen. Marsha is probably the one who thought, ‘I can’t believe this is happening.’ I’m always overwhelmed by this community and their answer to the call. It’s just amazing to me.”

The three courts were refurbished in the late fall. The project was a “work of love,” overseen by Marsha. Court One, Love Concrete, Harwood Signs and Dale’s Sporting Goods all contributed to the courts. Catawba College donated benches.

In addition to an overall court resurfacing, new fiberglass hitting walls were installed. A concrete pad replaced the muddy entrance. A tennis ball-shaped sign hanging on the outer fence now bears Matt’s name and a quote: “A great coach is hard to find and impossible to forget.” At the bottom of the sign is “Fly Trojans Fly,” a nod to Matt’s Philadelphia Eagles fandom and his love for the Knox Middle School Trojans.

Justin Pauley, Matt’s colleague and friend, will always remember when he and Matt watched the Eagles take on the Carolina Panthers. The Eagles won the game. A typically humble Matt decided to celebrate.

“(Matt) hasn’t said a word the whole game,” Pauley said. “Then it gets to be about 30 seconds left in the game and you look over. Where’d Matt go? Matt’s out in the aisle, flapping his wings, flying for about three minutes straight. He didn’t say a word, but he was grinning, flapping his wings. Fly Eagles Fly.

Matt up in heaven now, he’s looking at you guys here thinking about the tennis courts and you playing and Matt is definitely flapping his wings up there flying right now. I promise you that.”

With help from Matt’s wife, Ruth, and his family, Matt’s children Jackson and Ella helped cut the blue ribbon blocking the entrance to the court. They were the first to hit a ball on the courts as well, and they didn’t stop at just one. The siblings took plenty of enthusiastic swings before being joined by many of Beaver’s former players, who gathered near the baseline to take groundstrokes as Marsha lobbed them practice shots.

Everyone was smiling as they played together on the Coach Matt Beaver Tennis Courts.

The new courts will never be locked, giving anybody the opportunity to play the game.

“These courts are really open to anybody at any time and we feel like that’s so important,” Woolly said. “That’s what Matt’s legacy was. He didn’t care if you came from a wealthy neighborhood, a poor neighborhood or in between. Everybody was at Knox for a reason and that was to get a good education and play sports.”