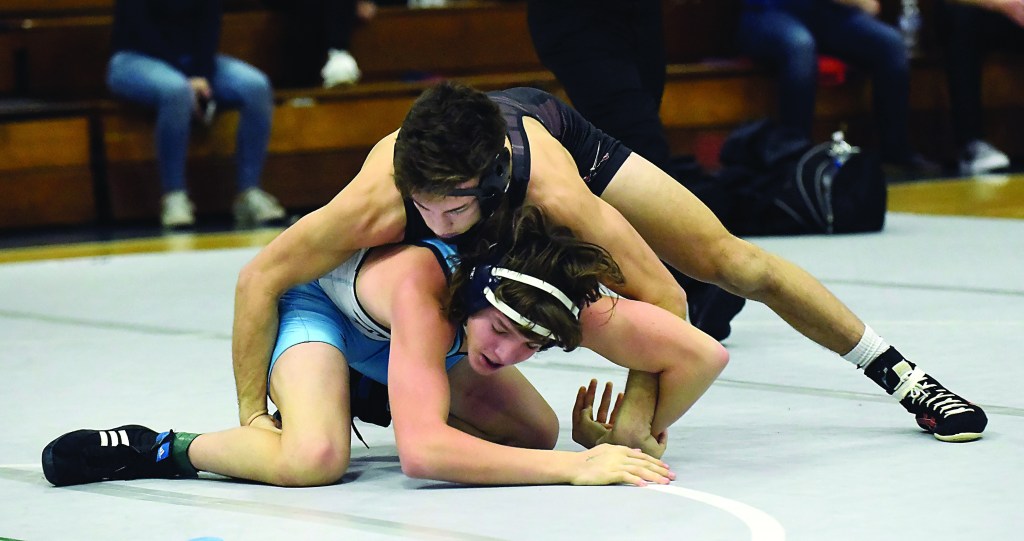 Cox won the 3A Midwest Regional championship at 138 pounds on Saturday at Eastern Guilford.

Cox had a first-round bye. He had a pin in the quarterfinals, won by tech fall in the semis and took a 15-4 major decision in the championship match.

Top four placers in the regionals advanced to state competition in Greensboro, Thursday through Saturday. Championship finals are at 4 p.m. on Saturday.

In the 2A Midwest Regional at Cabarrus Arena, Salisbury’s Reed Fugle (220) and Jaden Gaither (285) placed third.

Davie was sixth in the team scoring.

Marcus Cook broke school records as a Salisbury football receiver in the fall, and he continued an exciting school year on Friday.

Cook won the triple jump in the 1A/2A State Championships for indoor track held in Winston-Salem with an effort of 44 feet, 11 inches.

Cook placed third in the triple jump in the outdoor 2A State Championships in June with a 42-5 measurement.

In the 4A Championships on Saturday, A.L. Brown’s Daunte Marshall had a third-place finish in the 55 meter hurdles in 7.84 seconds.

South Rowan’s Eli Julian  placed fourth in the 1600 in Saturday’s 3A Championships.

The sophomore ran 4:25.44, the fastest time ever recorded for a Rowan runner in the event.

Mack McMillon, a North Rowan athlete who won the discus in the 2003 Rowan County Track and Field Championships, has passed away at 35.

The 3A State Championships were held on Friday in Cary.

South Rowan girls relay teams were 19th and 21st in their two events.

Dyzarious Carpenter scored 36 points for North Rowan’s jayvees on Friday. Jayden Polk and Jeremiah Alford also were in double figures for the Cavaliers.

At Rolling Hills, Jeff McEnteer made a hole-in one on the par-4 16th hole with a driver.

He was playing with Henry Morgan, Arnold Herring,  Azalee Huneycutt and Bill Peak.

Ray Pope made a hole-in-one on No, 5 at The Revival Golf Course at the Crescent on Wednesday.

Pope used a 7-iron from the gold tees. The feat was witnessed by Larry Petrea, Mike Blume and Rob Shoe.

Javon Hargrave (North Rowan) was credited with three tackles, including a sack, in the Pro Bowl.

Hargrave had 7.5 sacks during the regular season and one more in the playoffs for the Philadelphia Eagles.

He was a top-five interior defensive lineman based on his 2021 season.

Hargrave, 29, was credited with 32 plays blown up, meaning stopping the offense for negative or no gain.

He was one of only seven interior defensive linemen tallying 60 pressures and may receive a lucrative contract extension from the Eagles.

Livingstone’s men’s basketball team got scoring from 14 players and romped 94-75 at rival J.C. Smith on Saturday.

O’Koye Parker scored 17 and Tre Booker had 13 to lead the way for the Blue Bears.

Bernard Pelote had 20 points and 11 rebounds for the Indians.Peyton Gerald scored 16.

Catawba made only eight turnovers but couldn’t overcome 38-percent shooting.

Tripp Davis scored 21 for the Eagles.

Catawba women’s basketball got a big 56-52 win at Carson-Newman on Saturday to avenge a loss to the Eagles in Salisbury.

UNC Asheville’s Abigail Wilson (West Rowan) had seven points and three rebounds in a 61-52 loss to Hampton on Saturday.