After success in other NC cities, councilman works to bring cure violence model to Salisbury 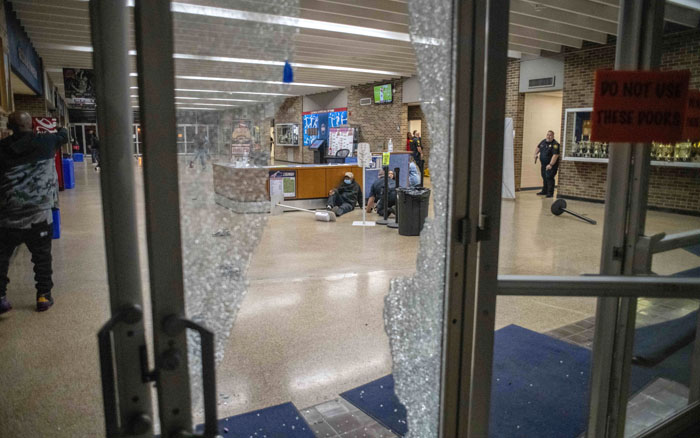 Broken glass is seen after shots were fired in December 2021 at Catawba College on during halftime of a high school basketball game. JON C LAKEY / FOR THE SALISBURY POST. 12/29/21, Salisbury,NC.

SALISBURY — With community safety and gun violence at the top of city and county leaders’ minds, council member Anthony Smith says the time is right for a more comprehensive, preventative approach in Salisbury.

Since 2015, Smith has championed the cure violence model, which was founded in 1995 by Dr. Gary Slutkin, the former leader of the World Health Organization’s Intervention Development Unit. It launched in Chicago and spread across the nation in the following decade. Slutkin says the idea is violence spreads like a disease — violence begets more violence — but employing interrupters can cut the cycle short and change community norms.

Just as the city hires consultants to work alongside departments for strategic planning and design, Smith said the same should be possible for a program that gets at the root cause of violence.

Smith said a growing number of community members are ready for discussions about a Salisbury model, including Rowan-Salisbury Schools Board of Education Vice Chair Alisha Byrd-Clark and Pastor Tim Bates, who leads Man Up Mondays and the Nightcrawlers group. Smith said he’s spoken with RSS Superintendent Tony Watlington about the initiative as well. Though, no formal commitments have been made from the school system.

Smith said he’s also been in conversations with nonprofit organizations that can potentially house the program.

Ingram Bell is the program manager for Gate City Coalition, the cure violence model in Greensboro. Bell also is a gun violence victim, suffering a gunshot to the head in 2011. That incident sparked her advocacy for resolving the issue of gun violence in the community.

But it took community buy-in, she said. In 2017, a child was killed behind an elementary school and that sparked community organization of such a model. In 2019, a double homicide prompted leaders to gather for a public meeting. Later that year, the city formally endorsed the Gate City Coalition by granting the program $500,000. Now in its third year, the program continues to be funded.

Gate City Coalition is housed by the nonprofit One Step Further. Greensboro Mayor Pro Tem Yvonne Johnson is the executive director of One Step Further, though to comply with state law, she recused herself from a vote on the contract and has relinquished coordination of this initiative to her board chair. One Step Further provides a mediation center, teen court, a sentencing-alternative center, life skills for children, jail and prison diversion and food pantry services.

“We have found it to be successful,” Johnson said.

During the same period, the report shows members of the Gate City Coalition met with 456 individuals to build meaningful connections, assist with conflicts and/or engage in conflict mediation. Staff reported mediating 141 conflicts in and around the target areas.

“It is important to note that most initiatives take at least three years of implementation before impact questions can be answered,” the report states.

Of the 31 participants who responded to the surveys and participated in interviews during the evaluation, only 16 provided enough information to include in the report. Findings showed 87% strongly agreed the program positively impacted in their lives. About 14 respondents said the program helped them with their anger issues, 12 said it helped get out of gangs or cliques, 10 said it helped them with substance use and nine said it helped with issues stemming from a felony record. When asked which aspect was most helpful, the top answer was tied between building personal skills, dealing with anger and legal advocacy. Educational support services follows closely behind.

The report also showed a number of community engagement events had a much broader reach. A string of block parties during “peace week” in July 2021 reached at least 700 people. A community pop-up event reached 350 people, the report said.

Johnson said the city’s investment is “a drop in the bucket” when even just one life is saved.

A 2020 review from John Jay College concluded the evidence base for violence interrupters was “promising but mixed.” President Joe Biden’s administration has credited it with being an “evidence-based model” and has committed to directing new funds and resources to violence interrupters in similar programs.

Following the city’s commitment, Smith said a team of analysts and experts from Cure Violence Global would conduct an assessment to get “a lay of the land” and offer suggestions for implementation.

Bell and Smith both clarified that the program works independently of local police. Bell said police provide interrupters with crime data and inform them of crimes in the program’s target areas. And though interrupters may join officers on the scene of a crime, they interact with the affected community separately and conversations about what’s going on remain confidential to not violate community trust. The goal is to prevent retaliation from the victim’s family.

“Police are needed. But community efforts such as cure violence is always needed, too,” Bell said. “I think it’s a ‘both/and.’ It’s never one or the other … Cure violence is pretty much a back-to-the village-type program, where we take care of our own.”

Salisbury Police Chief Jerry Stokes told the Post he’s not an expert on the model, but he’s seen great things with the city’s Cease Fire initiative, a partnership with Salisbury-Rowan NAACP that also uses volunteer de-escalators. Cease Fire has been the foundation of cure violence models in other communities.

“I’m not in a position to speak as an expert on cure violence, but look forward to hearing and learning more about the model,” Stokes said.

Smith said an endorsement of the model from Stokes would go a long way. He added one outcome of employing such a model is increased trust among police and the community because the model “shifts the norms in the community.”

Smith said he plans to bring the idea before the Salisbury City Council for discussion in March. He has also created a Facebook group called “Bring Cure Violence to Salisbury.”