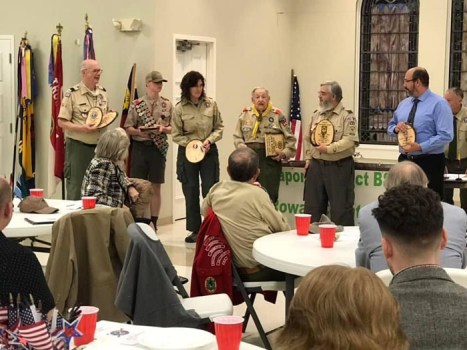 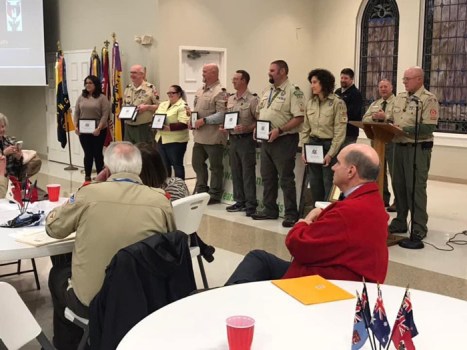 More than 90 guests attended and the master of ceremonies was Tom Duncan, district chairman.

Scouting came to Salisbury two years after World War I under the inspiration and work of T.B. Marsh Jr., who organized eight troops and established a Scout Council between 1920-22. Rowan became a member of the Uwharrie Council in 1924 and continued to 1965. The area that would become Rowan District BSA was formed when Ross W. Garrison came to Salisbury. He was one of North Carolina’s pioneer Scouters and organized Troop 44 at First Presbyterian Church, the first Scout Troop in Salisbury. He was the Central NC Council’s first Silver Beaver in 1935.

Rowan (now Sapona) District has been in the Central NC Council since 1966 and is still a member today.  Since 1929, over 1,912 have achieved the Eagle Scout rank in Rowan County.

Special centennial plaques were made by Tammy Peeler and the Plaque Patches were provided by Richard Shields of The Carolina Trader.

Arrow of Light Leader  of the Year – Eric Ryerson, Pack 443

Troop with most Eagle Scouts

Troop with the most Eagle Scouts in one year

George Wilhelm who had stepped down as district chairman, was presented with a special service plaque for his tenure.

Coming up soon is the Convocation of Eagles and Silver Beaver Banquet, Saturday March 26 at Benton’s Crossroads Baptist Church in Monroe.