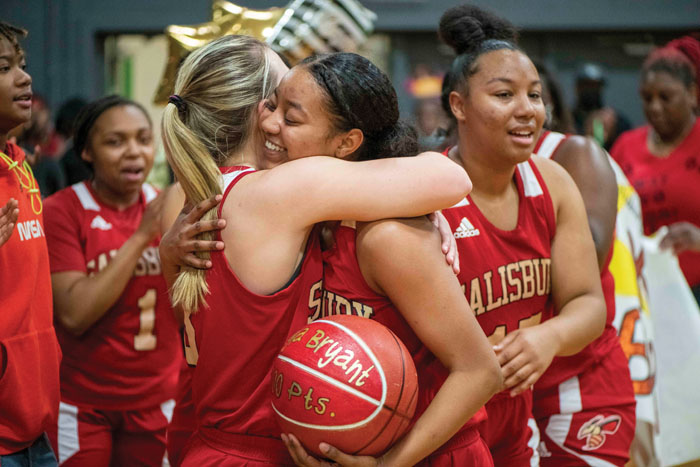 To accomplish that, the Hornets were going to have to win on the road on Friday. North Rowan is not only the closest neighbor and biggest rival for the Hornets, the Cavaliers also are the second-place team in the 1A/2A Central Carolina Conference.

Salisbury, older and stronger, even with two key bigs out, built a 32-20 halftime lead and won 65-39 for its 19th straight victory.

“Coming out, I was nervous, but mostly because it was such an important game,” Bryant said. “I wanted to get the 1,000 over with, so we could focus on winning.”

A skilled guard who carries a 4.1 GPA, Bryant needed 10 for the grand and came out hot.  A 3-pointer from the right side, a couple of 2s, and then a 3-pointer from the top of the key. She was 4-for-4 right out the blocks and got the 10 she was looking for in the first 4 minutes, 15 seconds.

“North was playing a little bit back on us because we are a penetrating team,” Bryant said. “I saw that and called for Jaleiah Gibson to set a screen for me, and she set the screen. They didn’t come off, and I knew right then, I had it.”

Most important, her team had a 12-6 lead after her early flurry. The Hornets led 17-9 after the first quarter.

Bryant’s mother is also her head coach. That’s Lakai Brice, who scored more than 1,000 points in high school in New Jersey before lighting it up for 1,441 points for the Catawba College Indians. Brice is also the all-time steals leader for Catawba.

“She taught me everything I know,” Bryant said.

“I am ecstatic for her,” Brice said. “For my daughter to get 1,000, when I’m coaching her, I’m just extremely happy for her. She worked hard for it and to get it as a junior is highly impressive. Anyone you ask will say, ‘Kyla Bryant is awesome.'”

Bryant lost about half of her sophomore season and about 200 points to COVID.

Bryant finished with 23 points on 10-for-17 shooting and had six assists.

Rachel McCullough was held to three points in the first half, but had a flurry in the third quarter and finished with 12. She’s scored in double figures 13 straight games.

Haley Dalton had her best game of the season with 12 points and four blocks.

Besides setting screens, Gibson had eight points and four steals.

Salisbury (20-1, 12-0) broke it open by holding the Cavaliers to six points in the third quarter.

“We are too good of a team to have scoring droughts like that,” North head coach Anthia Smith said. “The turnovers hurt. We just didn’t take care of the ball as well as we usually do.”

North (16-7, 10-2) got 13 points and four steals from Bailee Goodlett and 12 points and five rebounds from Hannah Wilkerson.

Salisbury will have a first-round bye in the CCC tournament.

Second-seeded North will be at home for tourney action on Monday at 6 p.m. against seventh-seeded Thomasville.

Lexington will host the tournament semifinals and championship.

Dave Shaw contributed to this story.