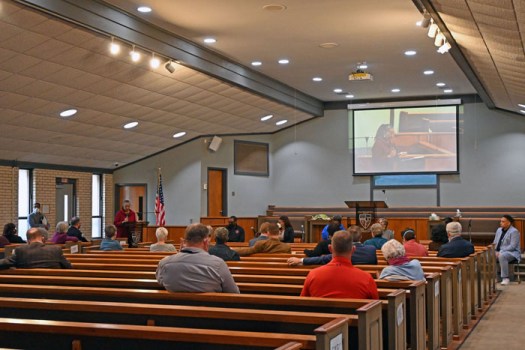 Natalie Anderson/Salisbury Post — City and county leaders joined members of the Salisbury-Rowan community Thursday at Gethsemane Missionary Baptist Church on Caldwell Street for a community safety forum to discuss the prevention of violence and crime among youth. 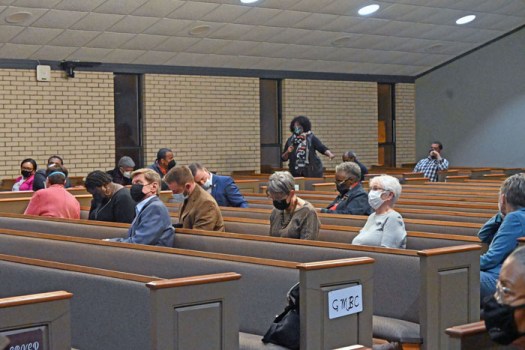 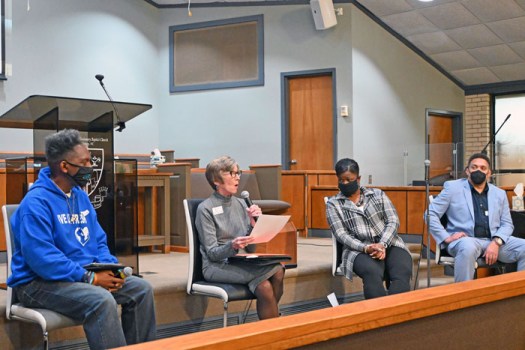 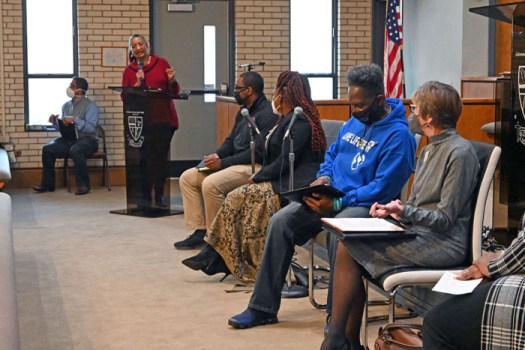 Natalie Anderson/Salisbury Post — City of Salisbury's Director of Diversity, Equity and Inclusion Anne Little speaks at Gethsemane Missionary Baptist Church on Caldwell Street Thursday during a community safety forum to discuss the prevention of violence and crime among youth.

SALISBURY — Community leaders and members agreed during a safety forum Thursday investment in and support of existing programs as well as more direct engagement with children and teens are key to addressing violence among youth.

Dozens of city, county and school leaders and members of the Salisbury-Rowan community gathered at Gethsemane Missionary Baptist Church on Thursday night to discuss public safety concerns among the community’s youth and how to more effectively prevent them from turning to violence.

Gethsemane Pastor Roy Dennis, a member of the Police Chief’s Advisory Board, and Anne Little, director of diversity, equity and inclusion for Salisbury, said they anticipate another forum with children at the table to weigh in.

Panelists spoke about their personal experiences working with youth. Karen South Jones said the Rowan County Youth Services Bureau uses restorative practices to keep children with their families, in school and out of the juvenile justice system. Multiple programs are involved, including YSUP Rowan, which is aimed at substance use among youth. Programs also involve teen court, restitution and community service, mentoring, gang intervention, trauma-informed assessments and therapy and youth re-entry.

Jones said there is data to suggest low performance in schools is a major risk factor for violent behavior among youth. North Carolina Department of Public Instruction data from 2018-19 show there are 14 low-performing schools out of the 34 total in the Rowan-Salisbury Schools system. Additionally, Rowan County ranks 13 out of 115 school districts across the state for low-performing schools.

But data also show, Jones said, less than 10% of youth who experience teen court come back again for another offense. However, she prefers restorative practices rather than punitive measures.

“I know that sounds like a lengthy process, and certainly it will take more time than simply adding a program here or a service there,” Jones said. “But I would argue that taking time on the front end to get things right will significantly improve our chances for true and lasting change.”

Pastor Tim Bates of Man Up Mondays, which visits and mentors students in school, challenged community members to give five minutes of their time each day to a child.

Bates said he spoke with a fourth grader this week who had after-school detention but was crying because he had two sisters who were going to get off the bus and not have anyone at home to watch them. A 10th grader told Bates he punches walls when he gets angry and, though not involved in a gang, possesses 15 guns. Bates said another account from a middle schooler was that his brother was involved in the Sam Moir Christmas Classic basketball tournament shooting in December and was angry because a family member of his was killed in a murder and nothing has been done about it.

Bates reported the middle schooler said he can access guns by raiding cars. Police Detective J.R. Drakeford said there’s a public awareness campaign the city and police department pushes to remind families they should lock away their weapons and ammunition safely inside the home and not in their vehicles.

LaTanya Hardy of S&H Youth and Adult Services said a recent mental health discussion among youth in Charlotte revealed many turned to social media, drugs and vaping, for example, to cope. As a result, they’re being traumatized, becoming traumatized adults and raise traumatized children, Hardy said.

Hardy said not every child who’s involved in violent activity performs poorly in schools. Sometimes, they’re the children of parents who work more than 40 hours each week, and all of the last few boys she’s worked with, she added, came from fatherless homes.

Jones said her organization has unsuccessfully applied twice for grants aimed at a fatherhood initiative. Sherry Hill, a licensed family therapist who’s worked with the Youth Services Bureau, often sees new programs start but eventually fizzle out because of a lack of funding and resources.

Mayor Karen Alexander said there are a number of grants being introduced and funneled from the federal government to address youth violence because it’s an issue experienced across the nation. Alexander said community partnerships and coalitions has to be the answer.

James Davis of Communities in Schools Rowan said he’s learned from talking to students they often turn to gangs to fill a void of support they’re not receiving elsewhere. The CIS program brings community resources into a handful of schools across Rowan County to offer in-school mentoring, tutoring, supportive guidance to students and parents, school uniforms and supplies and referrals to community agencies.

“We can only be safe if we as a community talk to them,” Davis said.

Davis also said CIS is beginning a Check and Connect program in August to train parents and the community how to more effectively listen and educate children.

Salisbury-Rowan NAACP President Gemale Black said he’s passionate about the issue of community violence because he once was the child who was suspended and hopping between gangs to be with the popular students. He now tries to be a father figure for many youth in the community who may not have one. He asked panelists how they can each work with the Cease Fire initiative, which works alongside local law enforcement with volunteer de-escalators.

Black said criticism among some in the community is that Cease Fire is a “police-lined” program, but he said volunteers work independently of local police as well.

Jones said her agency is going to “put boots on the ground” for Cease Fire.

Rev. Dee Ellison, who works with the city’s Human Relations Council, suggested using underutilized facilities within the Parks and Recreation Department and additional real estate to do more.

Former Mayor Pro Tem Al Heggins said the cure violence model is a way to connect all these dots by taking a public health approach to address the root causes of violence. She added that it “doesn’t push anything out, it helps us to bring it all together.”

Alexander said the city grants the Salisbury Community Foundation $40,000 each year to help fund programs and initiatives that address the most vulnerable in the community.

“We must make a purposeful and sustained commitment to agencies and organizations which are doing this work,” Jones said. “We must invest in them no differently than we would invest in our infrastructure of roads or water maintenance. We must move our efforts from plucking children from the violence river to fixing the place upstream where they are falling in.”

Dennis said anyone who has suggestions or ideas for next steps can email him at roy.dennis@gmbcnc.com.

Editor’s Note: A previous version of this article incorrectly called the YSUP Rowan program (Youth Substance Use Prevention Rowan) “Rise Up Rowan.” The acronym of the program is pronounced “WISE UP Rowan.” The Post regrets this error.