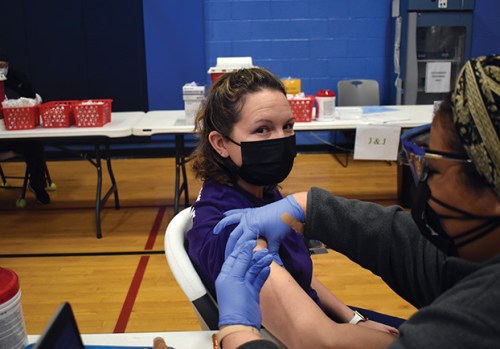 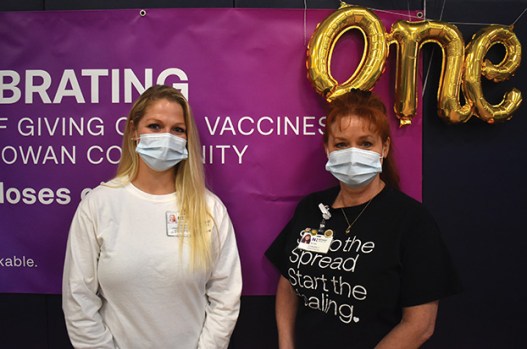 Tiffani Burney, left, and Leonora Ver Halen have led Novant Health's J.F. Hurley YMCA clinic since it started in January 2021. In the year since it opened, the clinic's staff has administered more than 42,000 doses. Ben Stansell/Salisbury Post 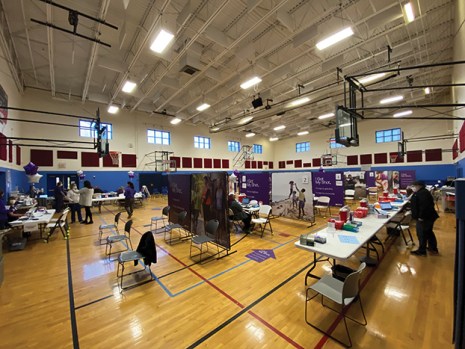 SALISBURY — With purple, silver and gold balloons floating in the air and miniature bundt cakes laid out on a break room table, there were reasons to celebrate in the J.F. Hurley YMCA’s youth gymnasium on Wednesday.

A little over one year ago, Novant Health opened a mass vaccination clinic at the YMCA located at 828 Jake Alexander Blvd. W. Since that time, the clinic’s staff has distributed 42,153 doses of the COVID-19 vaccine.

“We feel like we’re making a difference and that’s a great feeling,” said Leonora Ver Halen, the clinic’s co-site lead.

The clinic officially opened on Jan. 20, 2021, a date that will be etched forever in Tiffani Burney’s mind. Only a few days prior, Burney was tasked with transforming the gym into a high-functioning vaccine clinic.

As a part of Novant Health’s central operations team, Burney had plenty of experience assisting with clinics across the state. But none involved dispensing a vaccine intended to protect people from a global pandemic. And none of them had been in a basketball gym.

“It was like nothing we had ever done before,” Burney said.

Burney looked to mass vaccination clinics in Winston-Salem and Charlotte for guidance, but quickly realized the Salisbury clinic had its own unique circumstances. The clinic’s staff separated the gym with partitions placed on the hardwood floors, lined up plastic chairs to form a patient monitoring space and transformed the adjacent rock-climbing room into a supply closet and break area.

The clinic’s staff wasn’t alone in wading into unfamiliar waters.

“We knew that patients were nervous,” Ver Halen said. “They didn’t know what to expect and so we had to be prepared to answer their questions and make them feel comfortable to make this as positive of an experience as we could.”

The clinic’s first major challenge was planning for and responding to the high demand for vaccines.

“It was trying to juggle the volume of patients and trying to figure out how many we could actually see in a day,” Burney said.

A team of about 30 Novant Health employees and several dedicated volunteers shuffled more than 600 people in and out of the clinic on a daily basis.

“At the very beginning, we were slammed,” Burney said.

The demand for vaccines fluctuated over time, increasing and decreasing with case counts.

The clinic adjusted its staffing and physical layout accordingly, eventually going from being open five days to just two. The clinic is currently open on Wednesday and Friday from 8 a.m. to 5 p.m. Appointments can be scheduled online at novanthealth.org. Walk-ins are welcome, but Burney said appointments are encouraged. The clinic offers the Pfizer, Moderna and Johnson and Johnson vaccines.

Just over 66,000 Rowan Countians, or about 46% of the county population, have been vaccinated with at least one dose, according to the Department of Health and Human Services. Additionally, 61,256 people, or about 43% of the county population, is considered fully vaccinated. Novant Health has administered approximately 605,000 vaccines throughout its medical system, including the 42,153 doses given out at the Hurley YMCA. Not all of the vaccines administered at the Hurley YMCA were given to Rowan County residents.

The once-steady stream of patients at the Hurley YMCA clinic has become a trickle lately. Only 45 patients were scheduled for doses on Wednesday, which made it one of the lowest traffic days since the clinic opened. Most patients who visit the clinic are there for a booster dose, Ver Halen said. The clinic is now staffed by about 13 team members, but that changes depending on the day.

Not only has the volume of patients changed over time, but so has the age of patients. As teenagers and children were authorized to receive the vaccine, the clinic brought in pediatric nurses to help administer doses. They also started keeping stuffed animals, coloring books, toys and candy on hand.

When a young patient comes in for a vaccine appointment, Ver Halen said staff members attempt to drum up excitement by cheering them on.

“They walk out of here with smiles,” Ver Halen said.

The clinic could soon be vaccinating even younger individuals. The U.S. Food and Drug Administration is expected to approve a Pfizer vaccine for children between six months and 4 years of age. Ver Halen and Burney joke they might need to add a baby changing table.

“We’ll tweak as it goes along,” Ver Halen said.

Although it’s been a hectic year, Burney and Ver Halen said they will be sad when the vaccine clinic inevitably closes. Both said they will miss their coworkers the most.

For now, the clinic’s staff will take pride in what they’ve done and focus on adding vaccines to its 42,153 total.