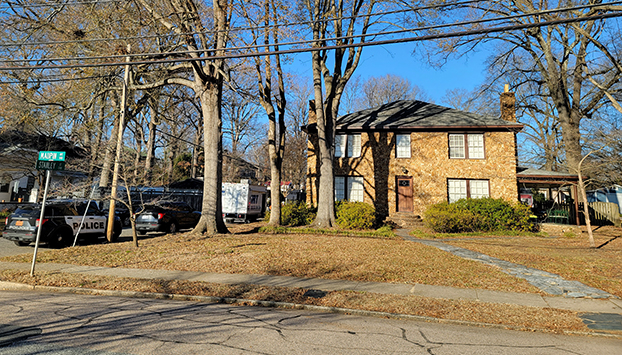 The house at 528 Maupin Avenue where the Karrikers lived.

SALISBURY — A search warrant executed Wednesday reveals more explicit details involving the alleged abuse of an 11-year-old boy by the parents who adopted him.

Georgianna and Reed Karriker, both 42, have been charged with attempted murder and two counts of felony child abuse. For the second time, police arrested the couple at their 528 Maupin Ave. home Wednesday afternoon, less than a month after their adopted son was admitted to the hospital with sepsis, hypothermia and multiple open wounds in various stages of healing.

The boy initially was admitted into the Novant Health Rowan Medical Center last month. He was later transported to a hospital in Charlotte and continues to recover.

Photos and videos recovered from the Karrikers’ cell phones last month display abuse from July 2021 to January, according to the newest search warrant. One photo showed the 11-year-old boy, naked and with visible bruising, contorted in an open chest, the search warrant states. Another video recovered during a search of the couple’s phones depicted a black strap attached to the bedroom door believed to be used to prevent the door from opening, police said in the search warrant.

The boy disclosed to investigators his parents forced him to run on a treadmill located in their home while beating him with a belt, the search warrant states. As they beat him, they continually increased the speed of the treadmill until he fell, resulting in physical injury, police said.

During an initial search of the home last month, investigators seized a lime green iPhone, one silver Mac Mini computer with a charger, one Darth Vader HP laptop with its charger, one Amazon Kindle in a brown case and one Silver Apple iPad.