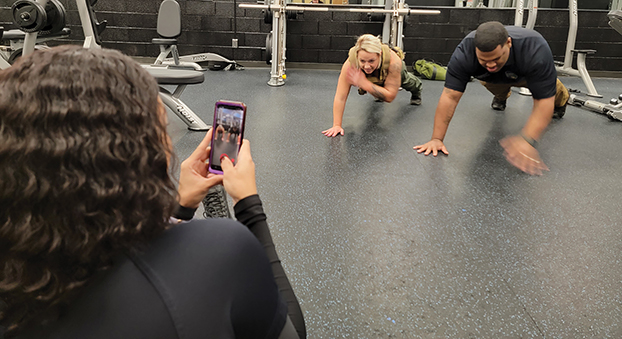 Smith recorded on a smartphone. Rabon and Robinson were stars of the show.

With the clarification made, Rabon and Robinson moved in unison, performing one of many popular dance trends on the social media app TikTok to Mister P’s song “Rock It” featuring 5th Ward Weebie.

That includes posting TikToks with officers dressed in uniform on picture day, walking through the department in sunglasses to the sound of AC/DC’s “Back in Black” and showing children exploring the interior of a police cruiser with a message: “In recruiting, it’s NEVER too early to make a great first impression.”

More importantly, the department’s recruiting campaign called “pull up and apply” is headed to college campuses across the Carolinas to make a pitch about Salisbury being a good place to pursue a career in policing. The tour, which started this week, includes East Carolina University, UNC Wilmington, NC State University, UNC-Chapel Hill, Coastal Carolina University and community colleges with basic law enforcement training programs. Robinson said Salisbury Police officers also will attend the CIAA basketball championship in Baltimore later this month to make a pitch to potential recruits.

On the trips, officers will drive a newly wrapped Ford truck with lights, sirens and contact information on the side.

“Our city council has done an amazing job of being supportive of police, but in addition we have to get out to all of the area schools and let them know that it’s not just about the compensation,” Robinson said.

Police work isn’t a get rich quick scheme. It’s about being the difference you want to see in the community, Robinson said.

“Really, the benefit of being in this career is to positively impact the community in the way it needs,” Robinson said. “You’re not going to be rich in this job, but you will have an opportunity to build relationships with community members, and some of those things you can’t put a price on.”

The Salisbury Police Department has 12 officer openings, said Smith, who leads the agency’s recruiting efforts. That’s an improvement from the 13 openings in mid-January and reflects the fact that 84% of budgeted positions in the department are filled.

“We’re just trying to reach out to as many people as we can to let them know we’re hiring,” Smith said. “We have a family oriented police department and come join the family.”

For new officers, the Salisbury Police Department pays a base salary of $42,753.95 per year. The department also offers a $750 sign-on bonus, $5,000 for lateral transfers, a 1% increase per year of service, $3,000 to relocate to the county and bonuses for college degrees.

“Competitively, if you look at the cost of living in comparison to larger agencies, we’re absolutely in the top 25%,” Robinson said, adding the experience of being a Salisbury Police officer “goes hand-in-hand” with larger cities. “Sometimes, it literally sounds like we’re all fighting the same battles.”

Robinson said the department also has investment in wellness initiatives, including mental health counseling for officers as needed.