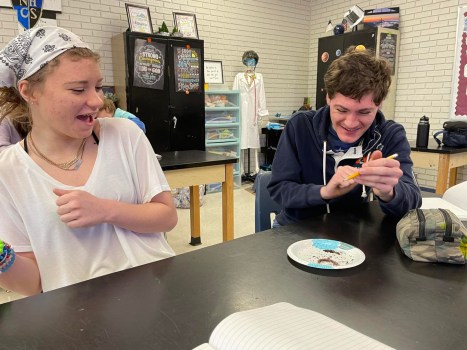 Some North Hills students were a little more excited than others on the project to test whether worms have nerve endings. submitted photo 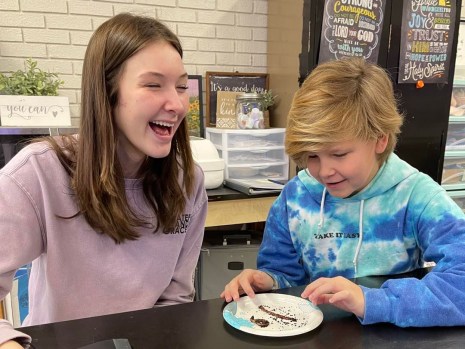 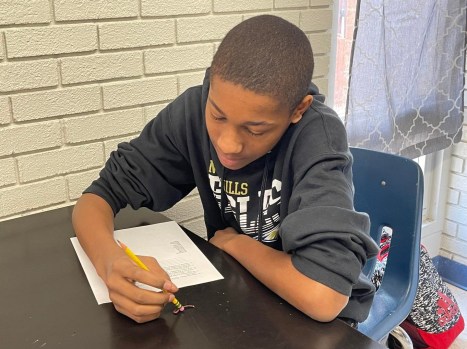 Learning more about the nervous system with earth worms. 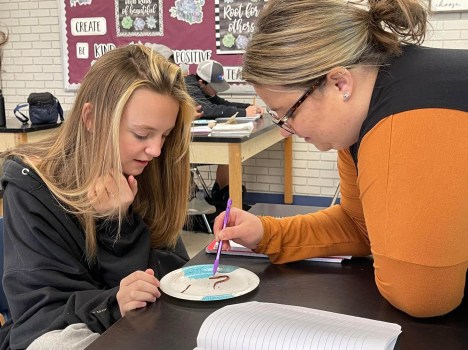 Ashley Grubb with her students.

SALISBURY – Sounds of horrified students were coming from the science lab at North Hills Christian School last week but it was just because earthworms were part of class.

Fish bait is what people think of when they look at worms. They’re small, slimy, and seemingly unaware of what goes on around them. Seventh and eighth grade science teacher Ashley Grubb said there is more to the curious creatures than you may expect.

“In this crazy, busy world, you need to stop and notice the little things,” Grubb said. “It’s important to stop and really observe and appreciate the beauty in what God has created, even worms.”

Grubb took inspiration from a worm dissection experiment outlined in the class science textbook. This is the second year she used creative teaching tool for learning about the nervous system. The test subjects came from Village Grocery in Salisbury.

The theory given for the experiment was to test whether or not worms have nerve endings. Grubb’s teaching method is hands-on, and her students have to test their hypothesis themselves.

The class was given eight tasks to complete in their lab notebook from holding the worms lightly to gently poking and weighing them down with pencils.

“Some worms slithered away with the pencil still on them,” Grubb explained. “We were pretty surprised to see how strong they are. Other worms would coil around the pencil like a snake.”

Some worms wanted nothing to do with the pencils and avoided them.

After the initial shock and disgust at the thought of touching worms, the students were split down the middle as to whether their test subjects could feel or not.

“I was very surprised by how active the worm was. It was constantly crawling off the plate,” student Eden Hager said.

“I thought the worm would change colors in the light,” Hager said. “The worm moved away from the light to protect itself.”

The final step of the lab begged the question: what if you were to cut the worm in half?

Grubb used this to show the students that worms reproduce asexually, meaning that halved worms regenerate to form a whole other worm.

Students warmed up to the worms by the end of the lab as the dramatic reactions from the worms were surprising. In addition to learning about the nervous system, the eighth grade class learned to appreciate things we look past every day.

When the class was finished with their experiment, they released the tiny creatures in the grassy area behind the school where they could live freely. The results of the labs showed students that worms have nerve endings much like humans do despite being invertebrates.