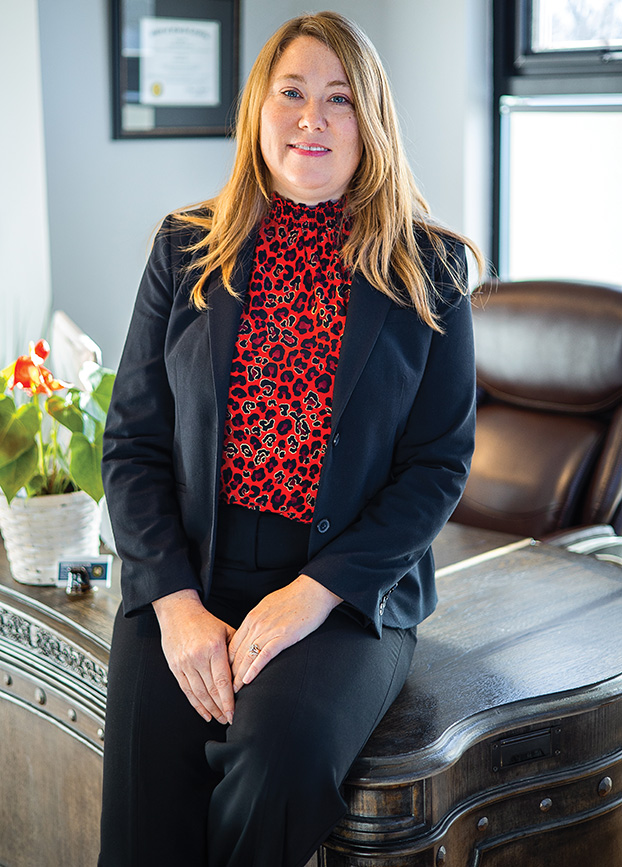 SALISBURY — Lauren Hoben considered a run for district court judge for some time, but she credits a line of scripture for inspiring her to declare her candidacy.

The line is Matthew 25:40: “Truly I tell you, whatever you did for one of the least of these brothers and sisters of mine, you did for me.”

“I just couldn’t get it off my heart,” Hoben said.

Hoben, a general practice attorney with a law office in downtown Salisbury, is running to fill the seat of retiring Rowan County District Court Judge Charlie Brown. Hoben, a Republican, is the only candidate who filed before the filing period was paused in December. However, Cynthia Dry, also a Republican, has publicly announced her candidacy. The primary is currently scheduled to be held in May.

Putting her name in the running for district court judge wasn’t an easy decision for Hoben, but she’s never taken the easy route anyway.

“I’m not afraid to stand up for citizens,” Hoben said. “That’s really why I felt called to run. It’s not a personal accomplishment. It’s not a goal I’m fulfilling for myself. I’m doing this for the community. It’s a little scary, but I feel like there’s a lot of positive changes that can be made in our court system that would really help our community.”

Hoben was born in Charlotte and raised in Salisbury by a large, close knit family. Her great grandfather was O.O. Rufty, who started what was once the city’s oldest retail business. Hoben remembers visiting the store, which was later run by her uncle, when she was child.

“I was a little spoiled because I could walk in and help myself to the candy at the counter,” Hoben said.

Hoben mostly attended Sacred Heart Catholic School, but she went to Salisbury High School starting in ninth grade. Although Hoben maintained As and Bs, she found class both boring and repetitive and often skipped altogether.

“My mom, I remember, would follow behind me to school to make sure I pulled into the parking lot,” Hoben said.

Halfway through her senior year, Hoben unenrolled from Salisbury High and enrolled in Henderson Independent High School to finish her course load quicker.

“They let you complete work at your own speed,” Hoben said. “I went to Henderson for two weeks and finished out my entire senior year of schoolwork.”

Hoben eventually enrolled at Catawba College — where she majored in business administration with an eye on law school. This time, there was no skipping class. Supporting herself through college, Hoben worked simultaneously in home health care and as a part-time office assistant at a downtown law office.

Hoben had her first daughter while finishing at Catawba and had her second daughter after enrolling at Charlotte School of Law, where she took evening classes while working two jobs.

“It was tough,” Hoben said.

After earning her law degree in 2012 and license to practice in 2013, Hoben worked for a time with Salisbury lawyer James “Pete” Hoffman before opening her own private practice. A general practitioner, Hoben specializes in criminal defense and family law, but also deals with wills and estates, traffic infractions and misdemeanors. During her nine years as a practicing attorney, Hoben said she has gained experience in “every aspect” of district court.

“I’ve practiced law in every area of law that a district court judge would preside over,” Hoben said.

Hoben prides herself on how much time she spends at the courthouse. In January, Hoben said she spent 20 days out of 20 possible days in district court for a number of matters. The courthouse itself is actually constructed on what was once her grandfather’s plumbing supply store. The business was torn down to make room for the courthouse, but the concrete floors remained.

“Where I practice law now, I grew up playing in that building,” Hoben said.

Hoben said she is proud that many of her former clients have reached out to her to request campaign signs or to voice their support for district court judge candidacy.

“It’s really those moments that make me appreciate what I do,” Hoben said.

Hoben is clear about how she would preside over cases if elected as a district court judge.

“I believe that judges should apply the law equally, to all the citizens,” Hoben said. “That they should be impartial and that everyone should have an opportunity to be heard. That judges should be very conscious of their prejudices that may be preconceived before hearing a case.”

Hoben also said she believes judges should always “put in a full day’s work” since they are elected and work for the citizens.

Hoben said there are certain programs she would seek to implement. One would be a Veterans Treatment Court designed to deal specifically with issues facing military members in the community.

“When we have veterans that come back, especially from overseas, with some mental health issues, a lot of times they’ll turn to substance use,” Hoben said. “There are services the VA offers and I believe that veterans deserve a little bit of grace for what they’ve gone through and if we can steer them and get them into the veterans court, put them into programs to help them, I think that would be one avenue.”

There are operational Veterans Treatment Courts in Buncombe, Cumberland, Forsyth and Harnett counties. Supporting veterans is important to Hoben because her husband, Paul, and stepson, Austin, are both veterans.

Additionally, Hoben would be interested in exploring the creation of a mental health and substance use court to give first time drug offenders a “fair shot” at having a charge dismissed and avoid a criminal record that would prevent them from future employment opportunities.

“I believe a lot of times it’s not really fair to expect that they quit cold turkey and have not one failed drug screening,” Hoben said. “The drug court follows the defendants through the system and watches them make progress and turn things around. (It) typically has a tracking judge that watches and makes sure they’re making progress, and if they don’t they end up with that charge on their record.”

Among her other priorities would be to improve public education about the district court system and to explore state and federal grant funding opportunities that could help the local court system.

When she’s not campaigning or at the courthouse, Hoben said she enjoys doing hands-on activities like home projects. Hoben lives in The Crescent neighborhood with her husband, daughters Isabel and Annabell Melton. She also has a stepdaughter, Abby Hoben.