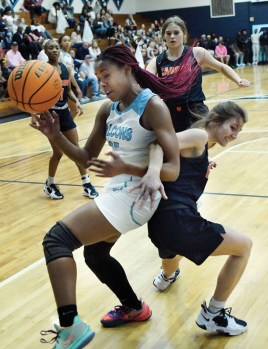 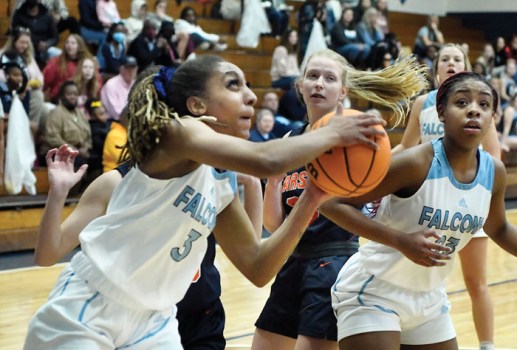 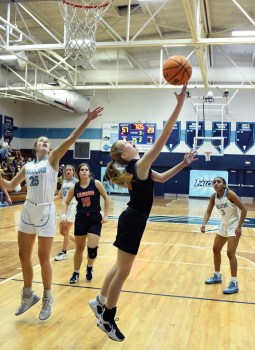 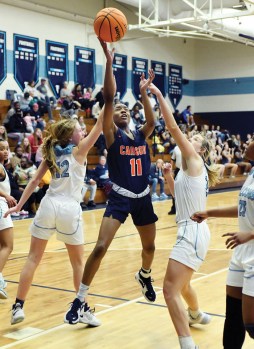 The Falcons had managed to win their first two without a full squad, but Carson is clicking on all cylinders and easily ended West’s nine-game winning streak,

Getting a career game from senior Aliayah White, the Cougars wiped out the Falcons 69-29, turning a highly anticipated matchup into a romp.

Carson (19-3, 12-1) put it all together on offense and defense, won its 10th straight game and clinched the South Piedmont Conference regular-season championship.

“We’ve got seven seniors, so the conference was a main goal for us when we started,” Carson head coach Brooke Stouder said. “This was our seniors’ time, and they’ve certainly come through. They’ve worked hard and they’ve improved.”

Lauren Arnold and Emma Clarke have carried West in the aftermath of a fight with Central Cabarrus that has left West with a shortened roster. West ( 15-5, 10-3) played for the third time without point guard De’Mya Phifer, who averages 17 points. West was missing starter Makalah Tenor, a defensive stopper and 3-point shooter, for the second time.

“We relied on a 2-3 zone, but it was a very active 2-3 — we weren’t just sitting back and hoping they’d miss,” Stouder said. “We did a good job of playing Arnold for the drive and we boxed out hard. We were able to keep Clarke and her off the boards.”

Carson had a ton of deflections and 14 steals. Defense generated offense for a team that has made a jump from where it was in December.

“I think we have gotten much better,” Stouder said. “We’re running the floor better and we’re moving the ball so much better.”

White filled it up. She made three 3-pointers and shot 9-for-12 for 23 points, and there’s no way the scouting report can prepare you for that. She averages about 7 points, but she was on.

“She was in attack mode and scored in a variety of ways,” Stouder said.

Hannah Isley (15 points) and Mary Spry (14) are reliable, experienced scorers. They did what they just about always do. Carson also got 10 from Camden Corley.

Riley Isley didn’t score, but had eight rebounds. She had three steals, as did White.

“One of our best defensive games,” Stouder said. “Played hard, played together. We were really solid.”