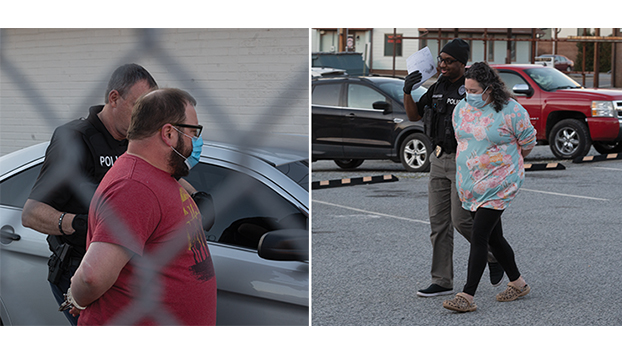 SALISBURY — With guns drawn, police arrested a Maupin Avenue couple Wednesday on attempted murder and felony child abuse charges after their adopted son was hospitalized for a series of serious health issues.

Reed and Georgianna Karriker, both 42, were arrested and jailed Wednesday for the second time during an investigation into treatment of the 11-year-old boy. The child was brought to the hospital unresponsive by Reed Karriker on Jan. 21 and later found to have sepsis, hypothermia and open wounds. An affidavit for a search warrant said the boy also had an unknown mass in his stomach.

Both Karrikers received a $300,000 bond when they were booked into jail on the new charges. In late January, they also were charged with felony child abuse for neglect. The new child abuse charge is for causing their adopted son’s injuries.

Lt. Justin Crews of the Salisbury Police Department said Wednesday the boy is still recovering and will be placed in the care of the Department of Social Services. The boy’s siblings have been placed in protective custody, Crews said.

Neighbors who watched the arrest Wednesday said the couple lived on Maupin Avenue for less than a year and may have moved in during the summer. The Karrikers previously lived in China Grove and were foster parents of the child they’re accused of abusing and attempting to kill.

Jayne Land, who also lives on Maupin Avenue, watched the arrest unfold from across the street.

She was warned about the impending arrest by an officer who was idling in a car outside of her home before the action. From Land’s vantage point, the arrest took place exactly how the police intended. Officers from the department’s Special Response Team used a bullhorn to call for the Karrikers to come out of the house.

“There were multiple, multiple police vehicles and everyone was prepared for any scenario in case it did get dangerous,” Land said.

Once the couple was in the front yard, they were placed in handcuffs. That’s when Land moved from watching through a window to her porch for a better view. Officers had their guns drawn, Land said.

“The policemen were very prepared and seemed to be very professional in the way they were handling things,” Land said. “It wasn’t a violent scene. There was no incident. The Karrikers followed the direction from the bullhorn.”

Land said it was shocking to see the incident play out in her “Leave It To Beaver” neighborhood of Fulton Heights, where kids play outside and people are always out walking.

“It’s very scary to see all of that and I’ve never seen it before,” Land said.

She was raised in Fulton Heights and moved back more than a decade ago. In the wake of the arrest, neighbors congregated outside to talk about what happened.

“Everybody is heartbroken for the children,” Land said. “We’re not scared. We’re just so sad that something like this happened.”

Crews said police continue to investigate the Karriker abuse case and could bring further charges. After the arrest Wednesday, police remained on scene to collect evidence and take photos.

Georgianna Karriker worked as a school counselor at China Grove Elementary until Jan. 27 — when she was suspended with pay by Rowan-Salisbury Schools after being arrested. A public records request didn’t return any other evidence of disciplinary action against her. She was first hired by the school system in 2008.