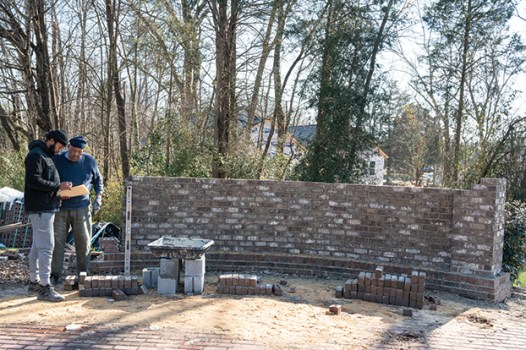 Josh Bergeron / Salisbury Post - Russell L.Smyre Jr. and his grandfather, Lovie Reid, look over paperwork during work last week on a wall in the West End that was struck by a car. 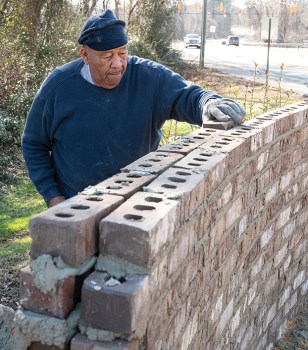 Josh Bergeron / Salisbury Post - Lovie Reid lays bricks for an interior layer of a wall noting the entrance to the West End neighborhood in Salisbury. 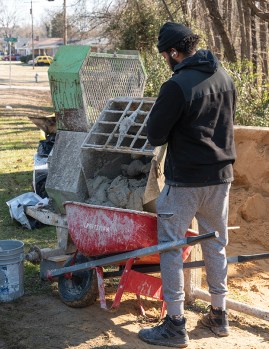 Josh Bergeron / Salisbury Post - Russell L. Smyre Jr. works a mortar-making machine last week as he helps with work on a wall at the entrance to the West End neighborhood.

SALISBURY — For Lovie Reid, they were more than just bricks in the wall.

By rebuilding the brick wall that stood at the entrance to the West End last week, the lifelong mason was refreshing the community’s sense of place. With some help, Reid started early last week by building interior layers of the wall before moving to the more meticulously crafted exterior.

“You know, signs, they mean something,” Reid said.

On Aug. 17, the wall was damaged when it was struck by a stolen car. A Salisbury Police report said an unidentified man stole a white Toyota Corolla near the intersection of Brenner Avenue and Statesville Boulevard, sped off after being spotted by the vehicle’s owner, attempted to turn left onto West Monroe Street and collided with the wall.

The man ran from the vehicle after the crash and hasn’t been arrested, according to the Salisbury Police Department.

“It tore a column and about a third of the wall down,” said Stephen Brown, a landscape architect and project manager for the city of Salisbury.

Insurance is covering the cost of repairs, but most of the bricks comprising the wall will be a slightly different color than the originals, which were paid for with help from the Blanche and Julian Robertson Family Foundation. The new wall was built on top of the old foundation.

Reid said he didn’t mind building the wall second time. He’s been a brick mason for decades, and continues to do it because “there’s something different every day.” It gives him pride, too, that projects built 40 years ago are still standing strong, including the Livingstone College perimeter fence.

Smyre said the sign brings additional character to the West End community and is something to be proud of.