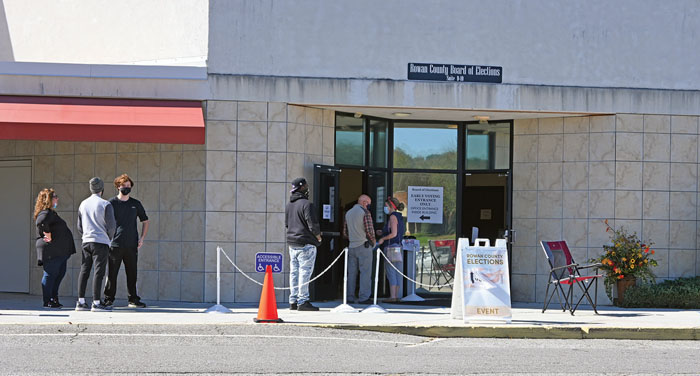 SALISBURY — The Rowan County Board of Elections on Tuesday approved a new early voting plan for the 2022 primary and authorized pay increases for many election workers.

The board approved an early voting schedule that will begin on April 28 and last until May 14.  Like the original plan adopted in December, the new one will include two Saturdays and one Sunday. The primary election for county, state and federal races currently is scheduled for May 17.

In the event of additional orders from courts about congressional or legislative district boundaries or a change in the primary date, the board authorized the total hours and days remain unchanged, with only the dates adjusted.

Early voting sites will be at the Rowan County Board of Elections at 1935 Jake Alexander Blvd. West, the south branch of the Rowan Public Library at 920 Kimball Road in China Grove and the Rockwell American Legion building located at 8580 U.S. 52 in Rockwell.

Candidate filing for the 2022 election is scheduled to resume on Feb. 24 at 8 a.m. and last until noon on March 4. Candidates who filed prior to the North Carolina Supreme Court’s order that cut short the original filing period in December will still be considered candidates.

Absentee by mail ballots will be mailed starting on March 28.

Also at the meeting, the board authorized pay increases for chief judges and other Election Day workers. Director Brenda McCubbins said the last increase for the workers was in the 2015-16 fiscal year. Early voting supervisors and workers automatically receive an annual cost-of-living adjustment.

The compensation for chief judge increased Tuesday from $230 to $265, which includes compensation for picking up and dropping off ballots, returning equipment and undergoing training for Election Day.

Other Election Day judges will now make $205 for carrying out elections and training, up from $175.

Increases will be proposed in the 2022-23 county budget and in effect for the 2022 general election.

One-stop supervisors will earn $13.18 per hour, while other one-stop workers will earn $10.98 per hour. The board also authorized additional pay for McCubbins if she exceeds 40 hours any week beginning from the first day of one-stop voting until the countywide canvass after the election. That additional compensation will amount to $30 an hour.

The Board of Elections will meet again on March 1 at 12:30 p.m., where they’re expected to discuss the proposed budget.