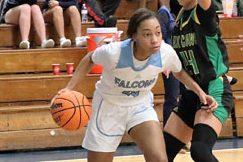 Lauren Arnold scored 28 for the Falcons, including 14 in the first quarter. Emma Clarke got 11 of her 19 points in the first.

Dede Cuthbertson, who didn’t play Saturday, returned to the lineup and scored seven.

The Falcons host Carson on Wednesday.

West may hear more from the NCHSAA today regarding Friday’s scrap with Central Cabarrus.

“We shared the ball and got on the glass,” North coach Anthia Smith said. “Rebounding on both ends was the focus tonight, and I was proud of the effort. Lexington is tough. They played hard the entire game.”

See more on these games online on Wednesday.

Hannah Isley scored 14 and Makayla Johnson scored 12 on 5-for-8 shooting.

Kyra Lewis scored 15 for the Vikings.

CHINA GROVE — Undefeated Central Cabarrus blitzed the Carson boys for 32 in the first quarter and romped 89-36 in SPC action.

South got 16 from Jacob Ritchie and 15 from Gabe Pozyck.

LEXINGTON — North Rowan’s boys pulled out a 77-72 overtime decision at Lexington in a CCC game with some huge momentum swings.

The Yellow Jackets made a comeback from a double-digit deficit in the fourth quarter on Senior Night, but North settled down and controlled the overtime.

Amir Alexander and Naejone Whitley scored 15 points each to pace the Cavaliers. Quashawn Carpenter had 13.

Will Givens made five 3-pointers for the Falcons, and Evan Kennedy made three in the fourth quarter to spark a West comeback attempt.