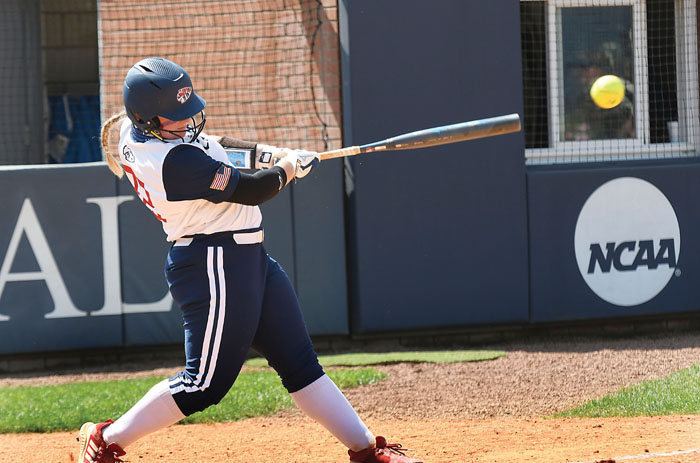 Catawba’s Brittany Ireland gets a hit against Wingate last season. Ireland will return this season. photo by Wayne Hinshaw, for the Salisbury Post

SALISBURY — Catawba’s rebuilding softball program will take on a challenging season in the South Atlantic Conference with a 13-person roster.

The majority of those 13 — hopefully, a lucky 13 when it comes to COVID and injuries — will be freshmen. The roster is short on familiar names and faces. Graduation hit hard. Unexpected transfers piled on.

Morgan is as upbeat and optimistic as ever. She coached a really good team last season (28-11).

“That was a regional team in a normal year, but COVID reduced the field from eight teams to six,” Morgan said. “We didn’t have dominant pitching that struck out a bunch of people. We gave up runs, but we usually were able to outscore people with good execution, good defense and good base running. There’s no reason we can’t do that again.”

Power-hitting first baseman Brittany Ireland (8 homers, 34 RBIs, .310) is the only Indian that you could accurately call a returning starter.

She’ll be in the middle of the lineup.

“A lot of teams pitched around Jordan Dean last season, so Brittany was at the plate in a lot of pressure situations,” Morgan said. “She came through a lot. She hit a ton.”

The plan is for Ireland to play some games at third base this season, with Brooke Lowery, one of Catawba’s two seniors, stationed at first base.

Lowery, a lefty swinger, was a terrific player for South Rowan in high school, but Catawba always has had someone in front of her at first base. Iredell emerged as a standout as a freshman last season, so Lowery got only 12 at-bats all season.

Catcher Bailey Benton is the other senior. She hit .302 in 14 starts last season. She’s the most experienced player other than Ireland.

The only junior will be a key player. Lauren Brickey pitched, played infield and hit at a strong junior college program — Walters State Community College in Tennessee. As a high school player in Tennessee, she was a phenom — winning “Miss Tennessee” honors.

“She could play a lot of roles for us,” Morgan said. “She’s going to do some good stuff.”

“Madi is hitting the ball well after making some swing adjustments, and Sommer is a fabulous defensive player,” Morgan said. “She really excels on defense.”

Gray could end up at shortstop, second base or third base, depending on how quickly some of the freshmen make the adjustment to college softball.

There are seven freshmen.

Salem Finney is from Forbush, the same strong high school program that produced Gray. Finney will be counted on to pitch.

Kary Hales is well-known locally. She played many sports at Carson and excelled in volleyball and softball.

She was on the Catawba volleyball team in the fall, but she hasn’t gotten behind as far as softball. She brings a big bat to the lineup.

“She can mash,” Morgan said. “She can play the infield positions, and she also will pitch some.”

Central Cabarrus product Christina Brendle could be a starting outfielder. She’s a lefty slapper who can run and throw.

Savanna Balderston is an outfielder who has impressed Morgan with her defense.

“She’s been diving all over the place, making amazing catches,” Morgan said.

With such a small roster, versatility will be important. Courtnee Carter is a middle infielder/outfielder. She’s the potential starting shortstop.

Gracyn Bennett, who came to Catawba from Georgia, is another versatile athlete.

“Good stick, and I think she could play anywhere on the field,” Morgan said.

That’s the team. There are positives with a 13-person roster. They’ll all play.

Morgan said the Indians have signed seven high school seniors and two junior college players for 2023. With only two current seniors, that will bring the roster back to about 20 for next season and things will be more normal.

“You don’t plan on 13, but I like the players that we have,” Morgan said. “We’re not complaining. We’re looking forward to it.”

After this weekend’s rainout, Catawba hopes to get started on Feb. 13 at home against USC Aiken.

CATAWBA AT A GLANCE