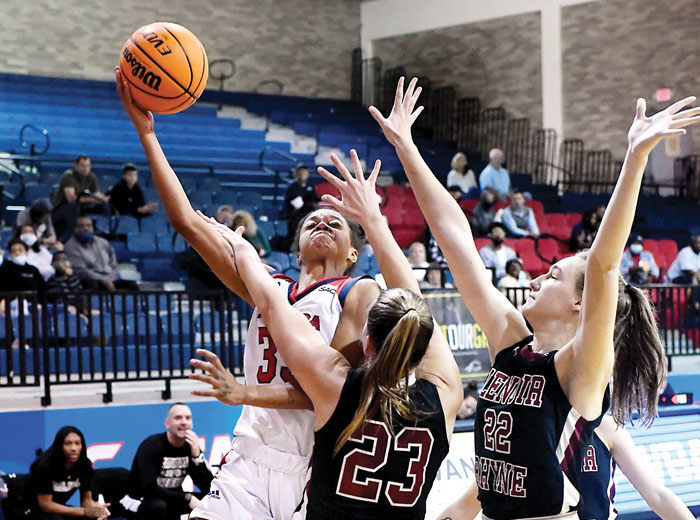 Photo by Wayne Hinshaw, for the Salisbury Post Catawba’s Lyrik Thorne shoots as Lenoir-Rhyne’s Alyssa Wagner (23) and Maddie Dillinger (22) during a game earlier this season. Thorne had a stellar 34 points against Wingate on Monday night.

SALISBURY — There are still big games ahead, but Wingate’s women’s basketball team may look back on Monday as the night the Bulldogs won the South Atlantic Conference championship.

Wingate beat Catawba 65-60 at Goodman Gym despite marvelous game by Catawba guard Lyrik Thorne. She shot 14-for-21, made five 3-pointers and scored 34 points.

The problem for Catawba was that Thorne was the only one who had a good night. Taisha DeShazo, Sheyma Stanback and Janiya Downs, three starters who have had great games for the Indians, combined to shoot 3-for-26. Catawba’s post scorer Sara McIntosh shot 3-for-10.

The 16th-ranked Bulldogs (20-2, 18-1) got 17 points from Bryanna Troutman, a Salisbury High product who had her battles with Ledford graduate Thorne in their high school days in the Central Carolina Conference.

It was a homecoming for Troutman in the gym where she played in high school Christmas tournaments. Quiet in the first half, the junior forward finished with 17 points and nine rebounds. She scored on an offensive board with 8:12 left to put the Bulldogs ahead to stay at 50-49. She contributed a huge three-point play right after that. If Wingate wins the league, she has a very good chance to be SAC Player of the Year.

Ranked 17th in Division II, Catawba shot only six free throws and got beaten on the boards, 46-32.

Catawba made it a close game by forcing 19 turnovers, while only committing seven.

A pessimist might point out that Catawba is 0-3 against the other three contenders.

But an optimist would say that Catawba gets to play all three of them one more time.