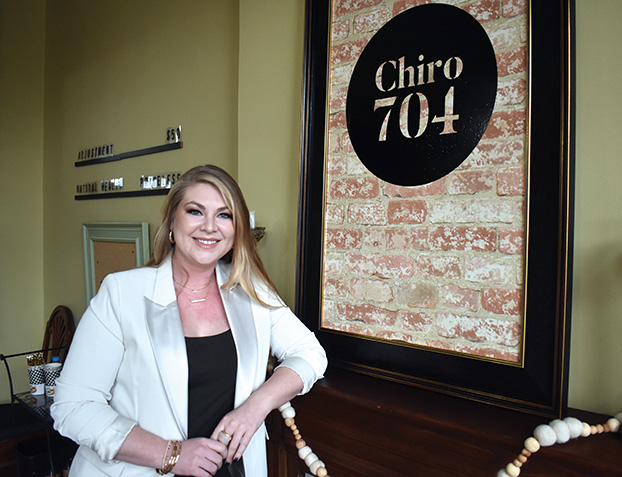 Sierra Davis has returned to her hometown to open Chiro704, a chiropractic office focused on overall wellness. Davis started going to the chiropractor when she was young, but her interest in pursuing the career path didn't emerge until college. Ben Stansell/Salisbury Post

SALISBURY — As a goalkeeper competing for the Salisbury High Hornets, Sierra Davis took plenty of tumbles while leaping and lunging to block shots.

That meant lots of trips to the chiropractor.

“(The chiropractor) had a lot of work to do to keep me put together,” said Davis, who also played tennis for the Hornets.

Davis didn’t know it at the time, but those visits were foreshadowing her future. After graduating with a degree in exercise science from the University of South Carolina, Davis got a job at a Concord-based chiropractor’s office while starting the exhaustive process of applying to medical schools.

It was a process she’d never finish.

“I realized while I was there that (chiropractic) was something that I wanted to do a lot more than the traditional medical school route,” Davis said.

Within weeks, she was visiting and applying to schools that would help her become a different kind of doctor.

“It was a complete 180 from what I had originally intended, but no regrets whatsoever,” Davis said. “It was kind of divine intervention almost. It was cool.”

Now a doctor in chiropractic, Davis has returned to her hometown. Last week she opened Chiro704, a chic office located at 118 N. Main St., Suite 201, on the second floor of the historic Washington Building. Davis said her practice will be wellness-based, which may set her apart from other chiropractors.

“We are focusing more on the whole body and function, rather than just specifically pain management,” Davis said. “We want to focus on the cause of symptoms rather than the symptoms themselves.”

With a cozy atmosphere accented by candles, natural light and trendy decorations, Chiro704 doesn’t look like a normal doctor’s office.

“I wanted it to be a more updated and modern approach to healthcare and self care,” Davis said. “It’s not as sterile as some of the more pain management chiropractors offices they’ve been in before. It’s a new approach to thinking about your health and I wanted that to be visually represented here as well.” 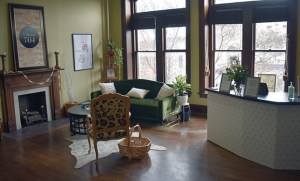 Chiro704 doesn’t have the look of a traditional doctor’s office. Ben Stansell/Salisbury Post

Davis has been plotting her own practice since before she enrolled in Sherman College of Chiropractic in Spartanburg, South Carolina. While there, she learned the basics of the discipline, like how to properly align a person’s skeletal system to help relieve pain and improve mobility.

She also pursued chiropractic practices outside of the normal course of study, including how to adjust animals. Davis traveled to Texas for in-person education on animal chiropractic. While most people are unaware that animals can be adjusted too, Davis said treating pets can be a good alternative or complement to traditional veterinary care.

“Usually, the options or choices we have with our animals is to take a medication for it or have a surgery for it,” Davis said. “That’s really not a good option when our animals start to get older in age. Sometimes they can’t handle either option. So, chiropractic has a really good place in veterinary care.”

Davis was interested in becoming a certified animal chiropractor because of her personal passion for four-legged friends. She grew up with pets and spent time in high school volunteering at Faithful Friends Animal Sanctuary. Davis has two Australian shepherd poodle mixes, Raven and Millie, who were some of her first furry patients.

Adjusting animals has become one of the most rewarding parts of Davis’ job.

“I’ve seen a lot of geriatric dogs come back and just have this burst of energy after they get adjusted,” Davis said. “The owners are blown away. They’re like, ‘Oh my gosh, I haven’t seen this type of energy since they were a puppy.’ ”

Davis is trained to administer care to horses, dogs and cats. Horses, she said, are surprisingly easy to adjust.

“Horses are incredibly intuitive,” Davis said. “A lot of times horses actually lean into the adjustment because they know what their body needs and they’re ready to accept it. Immediately as soon as you put that pressure on, they’re like, ‘Oh yeah, that needs to go.’ And they’ll help you out. It’s a wild connection and that’s one reason I love it.”

Davis said she is also focused on providing care to mothers during and after their pregnancy.

“It’s keeping pregnant women under care and making sure they’re comfortable as their body changes, but also that the development of the baby is at its best and prime during those nine months,” Davis said. “Of course, it makes labor a lot more comfortable for moms.”

Davis said chiropractic treatments can even cut down on labor times, which moms are “very, very excited about.” 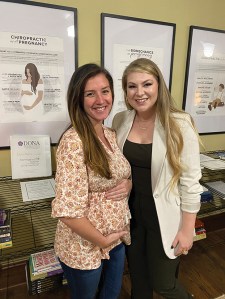 Providing care to young families is one of the reasons why Davis wanted to open a practice in her hometown. She said she’d like Chiro704 to be a welcoming place where parents and their children can come for treatment.

“We love having kids in here,” Davis said. “One of my chiropractic tools is an activator, a spring-loaded instrument. I’ve got the toy version that kids love to use. They’ll even help me adjust their moms on the table.”

More information about Chiro 704 can be found online at chiro704.com.