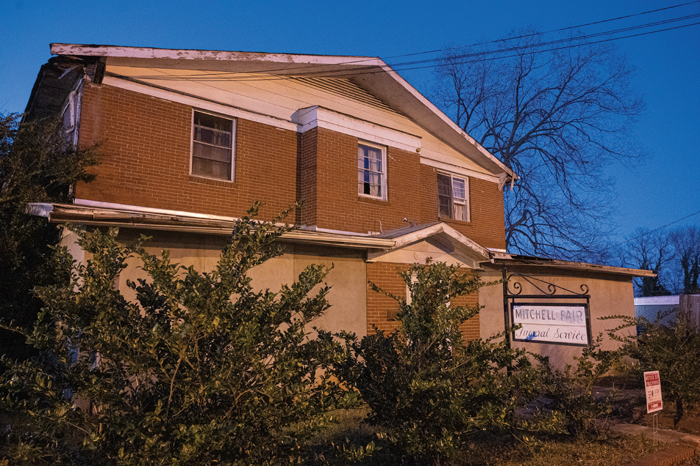 SALISBURY — For more than 50 years, Mitchell & Fair Funeral Service was a fixture in the West End community that provided “a little bit of everything to everyone,” says Rosalind Mitchell, daughter of the business’ founders.

“The funeral home was quite vital in the West End Community and was a central entity among the bustling and vibrant African-American businesses that once lined West Horah and South Craige streets for decades,” she said. “It was a business that was necessary of course, but at the same time compassionate to the needs of the community. It was a place of solace for the families that were grieving and sometimes it was a gathering place.”

After being placed on the city’s chronic abatement list in 2018, the Salisbury City Council last month authorized the demolition of Mitchell & Fair Funeral Services at 418 S. Craige St. and the adjacent property at 420 S. Craige St. due to their dilapidated status.

Mitchell & Fair Funeral Service’s history dates back to 1937, when Rev. J.C. Fair, Sadie Davis Fair, C.A. Ellis, Annie Ellis and T.V. Mangum partnered to open Ellis, Mangum and Fair Funeral Home at 701 West Horah St. Mangum was the funeral home’s embalmer for many years before moving back to his hometown of Statesville to operate a mortuary. The wives would often operate the funeral home while their husbands were away working at the Southern Railway.

In 1958, Allen L. and Naomi Shuford Mitchell opened Mitchell Funeral Service at 711 West Horah St. in the West End community. Allen Mitchell was a licensed funeral director and embalmer. Naomi Shuford Mitchell was the business manager. Their business became the first in Salisbury to have an on-site chapel for funeral services. Before then, the deceased were taken back to the family’s home as they awaited a funeral service.

The Mitchell & Fair Funeral Service provided services to Rowan County and surrounding areas that an ambulance in the early 1960s. Before closing in 2015, it also provided traditional and direct cremation, insurance, pre-need counseling, printing, benefits information and notary services.

“It was a little bit of everything to everyone,” Rosalind Mitchell said.

Allen L. Mitchell also was a building contractor. After starting, building and managing his funeral home, he operated Mitchell Construction Company and, later, A.L. Mitchell Builders. He built and restored a number of homes throughout Salisbury, Rosalind Mitchell said.

The Mitchells and Sadie Davis Fair were mentors to scores of young men and women, teaching them skills related to the funeral profession, construction and life in general. Rosalind Mitchell said her father used to have young men “gleaming in his wisdom,” and he gave them “hopes for the dreams that they may have had.”

“They were an inspiration with the sharing of their talents and being role models to many,” Rosalind Mitchell said.

Community involvement was important to the family. Allen L. Mitchell was active with the Negro Civic League, the NAACP, Salisbury Planning Board and Salisbury Community Development Board of Directors. He spent 25 years as a chief judge at voting precincts during elections. Allen L. Mitchell also was a member of the Tau Alpha Chapter of Omega Psi Phi Fraternity, and used his business as a meeting place and for initiations within the fraternity.

The children of the Mitchell and Fair families took over the business following their parents’ deaths. Sadie Davis Fair died in 1981, Naomi Shuford Mitchell died in 1992 and Allen L. Mitchell died in 2010. Rosalind Mitchell, Todd Mitchell, Avis Fair Wilkins Monroe, Basle and Vietta Fair Roberts Sr. all worked together until the business closed in 2015. While Rosalind Mitchell was the licensed funeral director, insurance agent and pre-need counselor, Todd Mitchell was a funeral assistant and worked as a painter and craftsman in the construction business.

Rosalind Mitchell still keeps alive the legacy of service and community involvement passed on from her parents. She’s currently a residence hall director at Livingstone College. She followed in her father’s electoral footsteps and serves as chief judge of the West Ward III voting precinct, a role she’s held for the previous 17 years. She’s also a member of the Multipartisan Assistance Team, which visits local nursing homes and retirement centers to assist voters with registration, absentee balloting and general election information. She is the secretary of F.A.C.T, or Families and Communities Together, a community outreach organization composed of local churches. She is also a member of the West End Coalition, a board composed of the West End Community Organization, West End Pride and Livingstone College.

The total cost to demolish the funeral home is estimated around $23,000, but $12,000 will be used from a recent donation from the Blanche and Julian Robertson Family Foundation to assist. Additionally, the city’s Code Services Department agreed to waive $3,180 in outstanding liens.

The remaining $3,000 from the grant will be used to demolish the adjacent property.

Rosalind Mitchell told the Post the demolition is bittersweet. Though she didn’t think restoration was an impossible feat, she acknowledged it would have cost a lot of money to do so.

“A rich legacy still exists with us and in the hearts and minds of the families that were served by Mitchell & Fair Funeral Service,” Rosalind Mitchell said. “We are forever grateful for the trust and support that was exhibited during the years. We are humbled and thankful to the citizens of Salisbury and Rowan County for allowing us to be a part of your family as we sought to serve you during the most precious time in your lives. ‘Thoughtfulness Characterizes Our Service’ is our motto and we pray that we made a difference.”