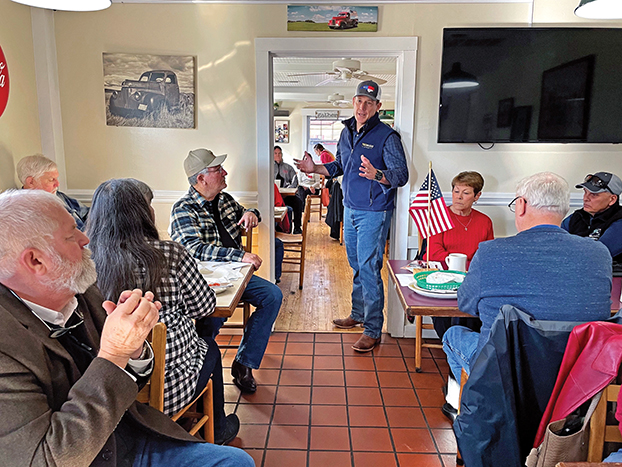 Budd, who grew up on a farm in Davie County, said the current inflationary rates will bring more challenges for farmers. He sees his background as an asset when dealing with the state’s biggest industry.

“I think we need somebody in the U.S. Senate that understands the biggest single economy in this country and the biggest job creator and the biggest economic driver for our state,” Budd said. “We’ve got amazing industries here, but the single biggest industry in this state is agriculture.”

In August, the Washington Post reported a trustee for farmers and other creditors alleged Budd’s father, Richard, transferred millions of dollars in assets to his family, including Ted Budd, when he took over the seed company AgriBio Tech more than two decades ago. Richard Budd received a $10 million loan to help the company when he took over, but ultimately filed for bankruptcy after the company paid back the loan. A lawsuit alleging that farmers should have been paid first followed.

Budd was named as a defendant in the multi-million dollar case that was ultimately settled with no admission of wrongdoing. The Budds agreed to pay less than half of the amount originally earmarked for the farmers and other creditors in the case, the Washington Post reports.

Months later, McCrory accused Ted Budd of “ripping off farmers” and using money owed to them to pay for attack ads against him. PolitiFact, a nonprofit fact-checking website branched from the Poynter Institute in Florida, rated the claims “mostly false” on its truth-o-meter. PolitiFact reported it’s misleading to state the Budd family profited from the repayment since it was a bridge loan and they ultimately agreed to pay back $6 million. Additionally, PolitiFact reported that while the Budd family has donated to Republican political action committee Club for Growth Action, which currently supports him, those donations were made before Budd’s Senate run.

During Saturday’s breakfast, Budd spoke about the importance of the Second Amendment, referencing his decision more than a decade ago to open a shooting range for local law enforcement and subsequent gun store.

“I think I’m the only one on this ticket with a day job and a small business as well,” he added.

Budd also said the state needs someone who can win and “someone who knows how to fight,” recalling his victory over 16 other GOP candidates in the 2016 election.

A Civitas Poll from January shows McCrory leading the primary field with 24% of the vote. Budd is at 19% and Walker is at 7%. However, nearly half of GOP voters surveyed indicated that they remain undecided on the primary candidates.

In November, a poll from the Redfield & Wilton Strategies, a global firm, showed McCrory at 42% support among Republicans and Ted Budd with 40% of support. That poll included more than 600 likely voters and included the front-runners of the Senate race, including Democrat Cheri Beasley.

Budd told the Post “the polling is in our direction.” And whether Walker remains in the race “is not a significant factor,” he added. Walker announced in January that he’d remain in the Senate race after considering a run for U.S. House a month earlier.

“We’ve certainly got the momentum,” Ted Budd said. “The trajectory is certainly in our favor. But you always want to run like you’re behind and never assume the win. You have to earn and take your message out to people across the state.”

Stading, who was elected to the Mecklenburg County District Court in 2018, briefly spoke about the role appeals courts play in policy-related decisions. The N.C. Court of Appeals includes 15 judges who rotate in panels of three to hear cases, with the bulk of those dealing with policy decisions. Appellate courts review cases from trial courts, which come from the local level, as well as civil and criminal appeals from superior and district courts.

Judges serve eight-year terms and four seats will be up for re-election in this year’s election.

Stading is a former prosecutor from Mecklenburg County and current judge advocate officer in the U.S. Air Force. He previously owned a law firm and represented law enforcement officers when they were investigated after discharging their weapons.

Stading said it’s important for voters to hear “where the heart is of a judge” and their values. Stading said like the late former U.S. Supreme Court Justice Antonin Scalia, he takes a textualist or originalist position when interpreting the U.S. Constitution. That doctrine means that what was written in the Constitution when it was developed is what the law of the land means today and that it “doesn’t change or evolve over time,” he said.

Stading said medical freedom is an important priority for him.

“Everybody in this room is smart enough, mature enough and intelligent enough to make your own decisions,” Stading said. “You really don’t need the government forcing a mandate on you. You can consult with your physician if you would like. You can follow guidelines if you would like to. But nobody needs to cram that down your throat and tell you what to do.”

Stading, who homeschools his children, said parents should have a say in their children’s schooling process.

The Appeals Court is currently made up of 10 Republicans and five Democrats, with some of those appointed by Democratic Gov. Roy Cooper and former Republican Gov. Pat McCrory. Even so, Stading said the Democratic majority on the state Supreme Court is still a goal for the Republican party since just one dissenting judge from the appeals court can appeal-by-right to the state’s Supreme Court. Stading encouraged voters to read about all the candidates before voting and to select those that will “push Republicans across the goal line come November.”