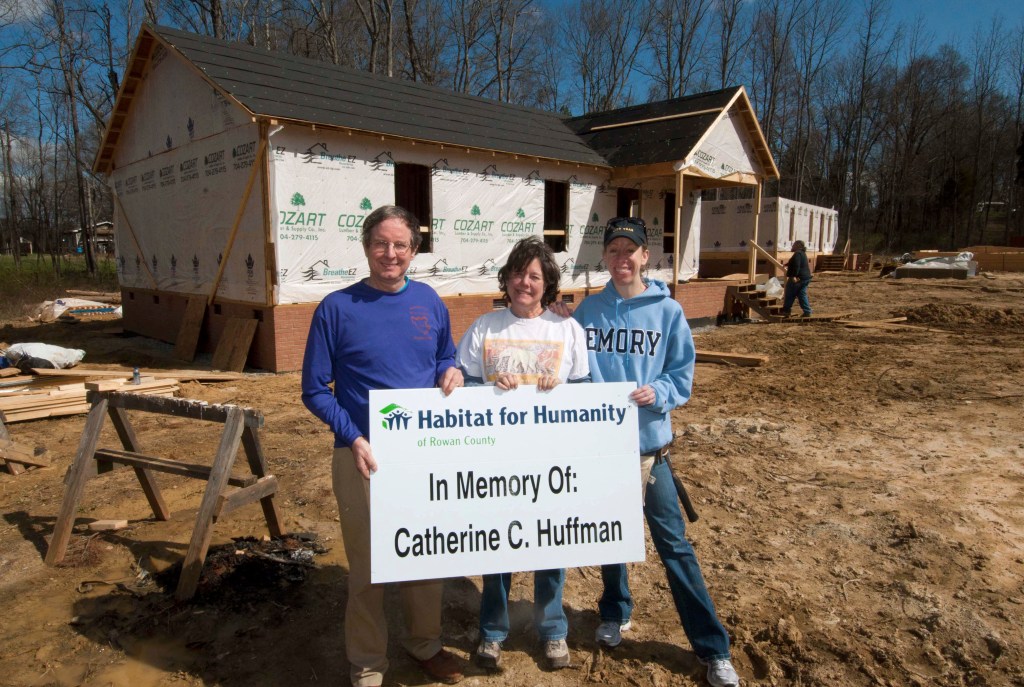 SALISBURY — Dick Huffman may have seemed like a quiet man to people who met him for the first time, but those who knew Huffman well describe him as a public servant who was committed to helping all of the county’s residents.

He was also known for his compassion, dedication to his wife, Dale, and sense of humor, a fact proven by a January conversation with Krista Woolly, who lives a short distance from the Huffman home in Salisbury’s West Square neighborhood.

“I need to talk to your husband because he has a lot of experience in dying and this is the first time I’ve done it,” Woolly recalled Huffman saying. Woolly’s husband, Rhodes, is the pastor at St. John’s Lutheran Church.

Huffman was a longtime attorney in Charlotte and Salisbury. Here, he worked for Wallace and Graham as well as operating a solo practice. He served on the Rowan Museum Board of Directors, Historic Preservation Commission, Community Care Clinic board, Historic Salisbury Foundation and as a member of the Rowan Rotary Club. He also served on the board of Lenoir-Rhyne University, his alma mater. Originally from Charlotte, he left a lasting gift for his adopted hometown by giving a portion of his estate to the Salisbury Community Foundation, where he served as president.

He died Jan. 29 at the age of 72 after a period of declining health.

“It’s been hard on all of us, and it just seems that it was too soon for him,” said friend and neighbor Barbara Perry.

Huffman moved to Salisbury in the 1990s after being charmed by the city while attending Octobertour. Huffman and wife Dale fell in love with a home in the West Square historic district, bought it, renovated it and later showed it on the same tour that brought them to Salisbury. Perry recalled commiserating with the Huffmans about the trials of maintaining an old house.

“We shared in the agony of something needing to be fixed or broken,” she said.

The Perrys and Huffmans frequently went out to eat on weekends. They sought to patronize local restaurants as businesses began to open up from pandemic-induced closures. And Perry was particularly impressed by the small things Huffman did, including making a point to thank restaurant proprietors after a meal.

They families drawn to each other, too, because neither was particularly interested in seeking attention for community service.

“We did that because we just wanted to do it,” Perry said.

“You knew they were doing it just for the kids,” Woolly said.

Attorney Mona Lisa Wallace first met Huffman at a Historic Salisbury Foundation event, and she later asked if he wanted to come work with her because the firm needed help in its asbestos practice. Wallace said Huffman was patient and respected in his profession.

A major professional moment was when Huffman was part of a team that tried and won the first mesothelioma case to ever be heard by the N.C. Court of Appeals. The case involved a secretary and graphic artist who worked in a Wake County Board of Education building. Courts found the work environment exposed the woman to a greater risk of contracting mesothelioma than the public because of the level of asbestos in the building.

The defense, Wallace recalled, said the secretary was only in a building with asbestos rather than physically handling it. As a result, her exposure wasn’t significant enough to tie her health condition directly to the work environment, the defense unsuccessfully argued.

Huffman worked for the Wallace and Graham firm from 1997 until 2005, when he opened his solo practice.

On his own, Huffman worked on issues that included Social Security, Medicare, workers compensation and disability issues. His obituary, written by sister Marsha Tarte, described him as a  “zealous advocate for those who had not gotten a fair shake at life, be it from injury, health condition, racial discrimination or just life’s circumstances.”

Ed Norvell, who also lives West Square, said he enjoyed having Huffman join regular lunches of men who lived in the neighborhood. They had lively discussions about politics and other topics of the day. While the group’s political opinions were evenly divided, they felt comfortable sharing their views. Norvell said he and Huffman often found themselves on the same side of the political divide.

Norvell said Huffman “cared deeply about the community” and “championed the rights of the underdog” professionally as well as through his community involvement.

He was also “totally devoted” to caring for his wife, Norvell said. Norvell’s sentiment is universally shared by people who spoke to the Post.

“Dick was the sweetest husband in the world. He did everything for her and he was totally devoted to her,” Norvell said.

Meg Dees, who leads Catawba College’s development office, first met Huffman when she moved back to Salisbury in 1999 or 2000. They got to know each other better through community organizations, particularly the Salisbury Community Foundation. Every year, the community foundation provides hundreds of thousands of dollars in grants to local organizations and nonprofits.

“He loved the thought of knowing his money could support organizations in perpetuity,” Dees said.

While the amount was undisclosed, the Foundation for the Carolinas said in an online post that Huffman’s choice to give a part of his estate to the Salisbury-Rowan Community Foundation was “ensuring tomorrow’s vibrant future.”

Mayor Karen Alexander said she was honored to have served on the board of the Salisbury-Rowan Community Foundation with Huffman.

“He loved the Salisbury Community Foundation because of the focus on supporting the most vulnerable in our community through vetted 501(c)3 organizations that were accountable for the grant funds received per their request,” Alexander said.

A memorial service will be held 11 a.m. Monday, Feb. 7 at St. John’s Lutheran Church. Visitation will follow the service. In lieu of flowers, contributions in Dick’s name can be made to Lenoir-Rhyne University, P.O. Box 7467, Hickory, NC 28603, noting “Huffman Speaker Series for Social Justice” in the memo line.